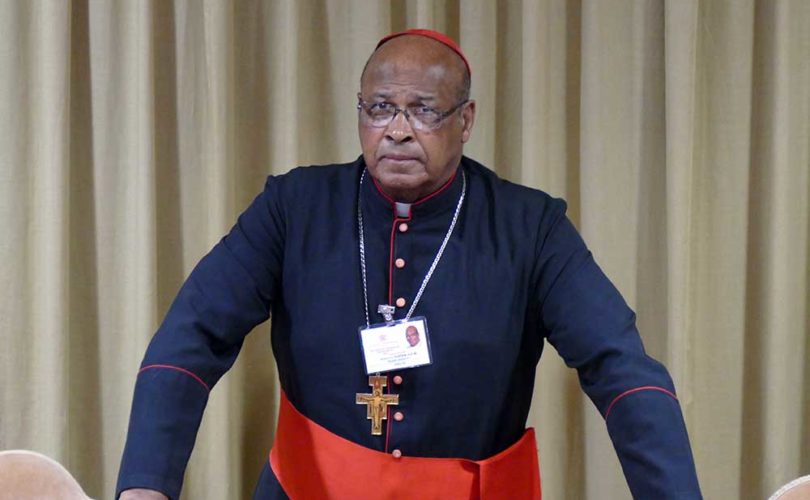 January 10, 2017 (LifeSiteNews) – A leading African cardinal has suggested that if Pope Francis’ Amoris Laetitia actually allows Westerners in irregular situations to receive Holy Communion, it would make the Catholic Church in Africa, which has fought long and hard against the irregular situation of polygamy, lose credibility among its people.

“If Westerners in irregular situations can receive Communion, are we to tell our polygamists & other ‘misfits’ that they too are allowed?” Cardinal Wilfrid Napier, the archbishop of Durban, South Africa, posted on his Twitter account January 5.

3/3 If Westerners in irregular situations can receive Communion, are we to tell our polygamists & other “misfits” that they too are allowed?

Cardinal Napier was responding to a Dec. 30, 2016 article by Fr. Raymond de Souza in which the Canadian Catholic priest and editor-in-chief of Convivium Magazine took a hard look at the “acrimony and division” in the Catholic Church caused by the ambiguity in the pope’s April Exhortation on marriage and the family.

Fr. de Souza argued in his article “Debating ‘Amoris Laetitia’: A Look Ahead” that if the Exhortation actually allows civilly divorced and remarried Catholics to “receive absolution and Communion without a required intention to change their situation” then a “great unraveling would begin” regarding the Church’s teaching on marriage.

“Marriage is the key issue,” de Souza wrote, adding that the Exhortation lends itself to allowing Catholics to question if it is “possible to be in a conjugal relationship with someone other than a validly married spouse that would be pleasing in the eyes of God?”

Commenting on this, Cardinal Napier noted the implications of the Church weakening its teaching on marriage in reference to the significant problem of polygamy in traditional African cultures.

“Was the faith taught by the missionaries, e.g. that polygamy is morally wrong — because Scripture teaches one-man-one-wife for life — completely wrong?” he tweeted.

The practice of polygamy in Africa continues to be widespread. Famous polygamists include the King of Swaziland who currently has 15 wives and Jacob Zuma, fourth president of South Africa, with 6 wives and 20 children.

Because marriage in God’s plan involves one man and one woman, the Catholic Church condemns this practice, forbidding practicing polygamists on account of their obstinate and public sin from receiving Holy Communion. To combat the problem, the latest document on the Church in Africa, Africae Munus: Post-Synodal Apostolic Exhortation on the Church in Africa, calls for a “change of behavior – for example, sexual abstinence, rejection of sexual promiscuity, fidelity within marriage” and a new “sex education based on an anthropology anchored in the natural law and enlightened by the word of God and the Church’s teaching.”

Cardinal Napier’s tweet all but denounces what would become a vast problem in his country if the “discernment” process proposed by Amoris for allowing couples in irregular situations to approach the sacraments comes into vogue.

Such a discernment process has already been championed by several leading prelates, following Amoris’ lead, who have given their own justifications for giving Holy Communion to people in “difficult” situations. These include Bishop Franz-Josef Bode of Germany, who suggested admission to Communion by both partners of mixed marriages, Cardinals Walter Kasper and Kevin Farrell with their call to admit “remarried” divorced Catholics to the sacrament, as well as Cardinal Christoph Schönborn with his interpretation of Amoris allowing for “discernment” along with “graduality of admission” to the sacraments for couples in irregular situations.

Napier’s tweet indicates that he recognizes the problem that “individual discernment” could have in his own cultural context, namely, people who live in polygamous relationships could now claim to have “discerned” in their own “conscience” that it is valid for them to receive Holy Communion. If polygamists were to be admitted to Holy Communion in certain circumstances, decades of work of Catholic missionaries would be undone and swept away along with the Catholic understanding that marriage is a union between one man and one woman that can only be dissolved by death.

During the recent Synods on the Family, Napier was not on the side of theologians supporting the “Kasper proposal” that would allow Communion for Catholics living in objective adulterous relationships. In a video interview with Catholic News Service from that time, Napier rejected outright Cardinal Kasper’s Communion proposal, warning that it would mean opening the door to Communion for polygamists as well. He was so concerned about the bewilderingly wide acceptance of Kasper’s proposal among leading Catholic prelates at the Synod that he went as far as endorsing Edward Pentin’s explosive book The Rigging of a Vatican Synod?, as LifeSiteNews reported.

With Napier having defended Pope Francis against the four Cardinals and their dubia, while at the same time extensively quoting Amoris Laetitia in his tweets over the past months, faithful Catholics are left puzzled as to what game the Cardinal is playing.

Last month after being challenged by another Twitter user, Napier, in a series of responses, suggested that Catholics who “analyses [sic] negatively” the Pope, do so “without checking what [the] Pope actually said.” He also suggested that by not responding to the dubia, Pope Francis was following the example of Christ who sometimes refused to answer questions from interlocutors.