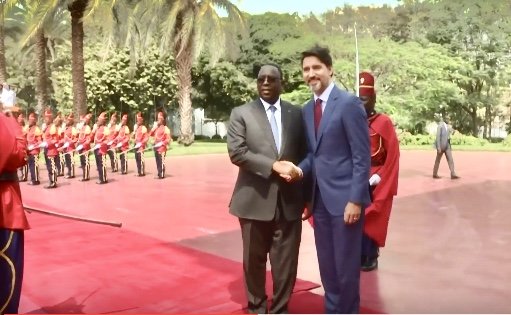 And President Macky Sall’s defense of his country’s culture and laws made front-page news in the Francophone country’s capital city of Dakar.

Canada’s Liberal prime minister told reporters at a Wednesday press conference that he had to raise the subject of Senegal’s criminalization of homosexuality with Sall because he was a “great defender of human rights,” according to Associated Press (AP).

For his part, the Senegalese president said his country respected human rights, but that “we’re comfortable with our laws,” and he stressed there would be no change in legislation on homosexuality, AP reported.

“We cannot ask Senegal to legalize homosexuality and organize tomorrow’s Gay Pride,” Sall said. “It is not possible. Our society does not accept it.”

“It is our way of living and being. It has nothing to do with homophobia,” he added.

Senegal is a “moderate, predominantly Muslim nation where homosexuality is criminalized and punishable by up to five years in prison. ProsecutionS are rare but discrimination in the country’s traditional communities runs deep,” according to AP.

The country is considered “one of Africa’s model democracies” and “has a tradition of stable governments and civilian rule,” according to the BBC.

Trudeau’s eight-day tour of Africa ends Friday and was primarily focused on winning support for Canada’s bid for a non-voting seat on the U.N. Security Council.

Canada is vying with Ireland and Norway for the two vacant seats from the council’s Western group for 2021 to 2022, AP reported.

“We need Canada’s voice at the Security Council. Canada is a country of diplomacy. Canada is not difficult to support,” the president said.

However, it remains the case that under Trudeau, Canada is committed to indefinitely bankrolling the global promotion of homosexuality and gender ideology.

Last February, the Liberals announced they would spend $30 million over the next five years, and after that, more than $10 million every year in perpetuity – or as long as they are in power – to advance the LGBTQ agenda in as part of international aid.

Trudeau is also committed to pushing abortion globally, with the Liberals earmarking a staggering $7.1 billion by 2030 to promote and provide abortion as part of international aid.

The 48-year-old father of three is known for his non-stop homosexual advocacy at home.

In 2016, he was the first sitting prime minister to march in the infamously lewd Toronto Pride Parade and has marched in “Pride” parades every year thereafter.

In 2017, Trudeau approved a $145 million dollar settlement to LGBT Canadians who claimed the government discriminated against them in the past, made a tearful apology to these individuals in the House of Commons, promised $16 million to launch an LGBT propaganda campaign, ostensibly as reparation for historical wrongs to LGBT people, and vowed to “stamp out” alleged discrimination against homosexual persons.

The Liberals support a Bill S-202 currently in the Senate that would criminalize “conversion therapy” for minors and Trudeau’s mandate letter to the justice minister called for similar legislation.

His mandate letter to the minister of health asks her to “implement a behaviour-based model of donation that eliminates the blood ban for men who have sex with other men.”