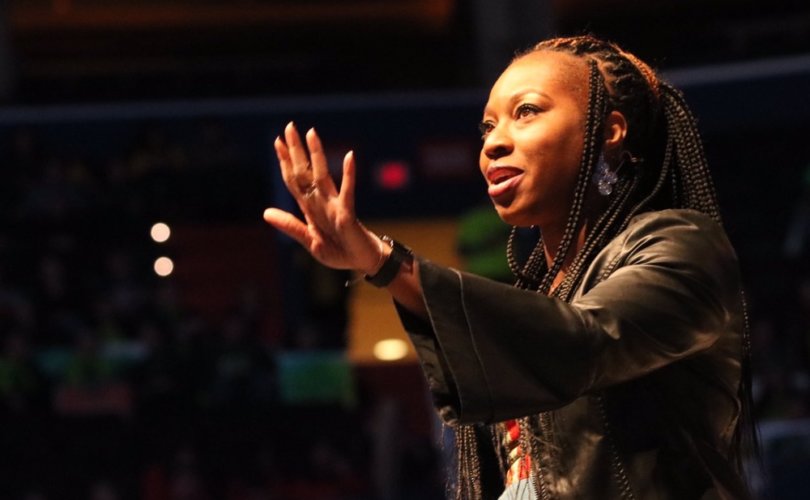 WASHINGTON, DC, January 18, 2019 (LifeSiteNews) – In a stirring speech punctuated with cheers and applause, African pro-life leader Obianuju (Uju) Ekeocha told an arena packed with young people in Washinton D.C., “You are the pro-life generation, and you will bring an end to the crisis, the abomination, that is abortion.”

Speaking to the predawn crowd of thousands gathered for the annual Youth Rally and Mass for Life at Capitol One Arena, Ekeocha said, “We are here to end the human rights crisis that is abortion.”

Ekeocha explained that the history of humanity often is about one group of people abusing other groups of people, going so far as to incorporate that abuse into society’s laws.

“But among us today there is a silent genocide happening,” explained Ekeocha, “and all of us here today have come to say, ‘We want to see an end to this genocide that is abortion.’”

“Laws come and go, but universal truths remain,” declared Ekeocha, who then proclaimed “Human life begins at conception without exception,” to thunderous applause and cheers.

The African pro-life leader said that when she moved to England after spending her young life in Nigeria where abortion was unheard of, she was shocked, and wondered, “who will bring about an end to this injustice?”

Since such powerful forces promote abortion, she realized that the only way to fight against the injustice was to become engaged in the battle herself, and to “fight it with everybody who is ready to fight it.”

She then encouraged the arena full of young people to look at those seated around them. She then said: “This is the pro-life army. We are the army that will end abortion. We are the pro-life generation.”

Ekeocha pointed out that “more than 42 million of our brothers and sisters were killed in 2018” worldwide, but that media ignores the tragedy of the enormous human carnage.

Because of the 42 million children who were killed, I would like to ask you to make a strong resolution that when you leave this March for Life,’ she said, “You then have to take the battle to your schools, to your friends, to your family.”

Ekeocha suggested asking friends, “Do you know what happened in 2018? Do you know that the number one cause of death in the year 2018?  It is abortion.”

“Pro-life is pro-science,” said Ekeocha. “We are pro-life, and anybody who is not pro-life is a ‘science denier.’”

“If we are really going to fight for human rights, we cannot have human rights until the life of every baby in the womb is protected in every culture in the world.”

Speaking directly to the thousands of young women gathered at the event, Ekeocha pointed out that  the world tells women, “We need abortion to be free.  That in order to have a career and to advance we need abortion.  But here is the response we should have to that:

No one should ever have to advance herself with the blood of her baby. None of us should ever have to find success with the blood of our baby, and until abortion is completely abolished, women will never be completely free.   When you go home, look in the mirror and say, ‘We have got no one but us, and we are going to be the ones to end abortion.’ We will end abortion, because we are the pro-life generation.

Uju Ekeocha is the founder and president of Culture of Life Africa, an initiative dedicated to the promotion and defense of the African values of the sanctity of life, beauty of marriage, blessings of motherhood and the dignity of family life. Culture of Life Africa responds to the assaults on these values with the voices of pro-life and pro-family African women.

She has advised many African Members of Parliament, African United Nations delegates, Ambassadors and other decision makers on pro-life and pro-family issues. She has also worked closely with many African Religious Leaders to promote pro-life values in different countries. She has co-authored pro-life declarations with various African Catholic bishops conferences promoting the message of life in Africa.

Consistent with her love for the wonder of life, Uju is also a specialist biomedical scientist in Haematology, working at a Hospital in the United Kingdom. Prior to her current position, she was a Medical Laboratory Scientist at the University of Nigeria Teaching Hospital. She holds a Masters degree in biomedical science from the University of East London and a Bachelor’s degree in microbiology from the University of Nigeria. Uju was born in southeast Nigeria, the youngest of six children, and has resided in the U.K. since 2006.