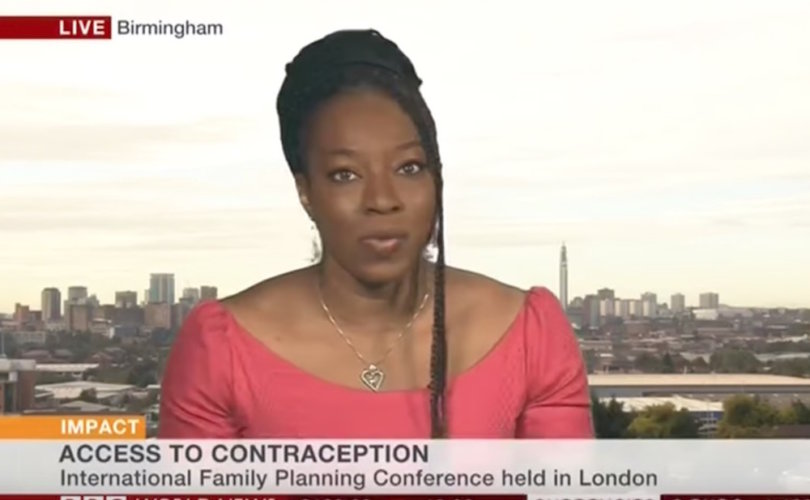 ENGLAND, July 11, 2017 (LifeSiteNews) – This morning, an African woman and pro-life activist destroyed a BBC anchor's claims that African women “need” abortion and contraception in order to get out of poverty.

In fact, contraception is a “Western solution” to African poverty, she said, adding that Westerners “better be careful” with such “colonial talk.”

Ekeocha was speaking in a segment dedicated to “World Population Day,” which is marked today.

She was representing the Society for the Protection of Unborn Children. She is also the Founder and President of Culture of Life Africa.

“If we’re talking about abortion, well, I don’t think that any Western country has a right to pay for abortions in an African country, especially when the majority of people don’t want abortion…that then becomes a form of ideological colonization,” said Ekeocha.

BBC's Babita Sharma responded by saying, “the fact remains that hundreds of millions of women don’t have access [to contraception] and should.”

“Well, you’re saying 'should,' but who are you to decide, if you don’t mind me saying?” asked Ekeocha. “There isn't a popular demand.”

“I was born in Africa, I was raised in Africa, I continue to go to Africa many times a year,” she explained. “You just speak to any ordinary [African] woman. I think contraception might be like the tenth thing she says [that she wants], if that.”

Sharma claimed contraception is a “basic human right” and necessary for overcoming the cycle of poverty.

“That’s kind of a Western solution, isn’t it?” asked Ekeocha. “If you speak to the ordinary woman on the streets of Africa, what is she asking for?”

Ekeocha blasted the “Western solution” of thinking contraception is the solution rather than food, water, and basic healthcare.

“Why don’t you listen to the people first?” she asked. “In all this talk about contraception, the one thing that I have never heard of in all my time trying to track all these things is something like the side effects of contraception. No one ever tells the African women, when they come to promote contraception across the different African countries.”

Ekeocha said she recently consoled African women who had IUDs inserted into them without being warned about the side effects.

“These women were crying,” she said. “No one ever told them” about the terrible side effects of contraceptives. “But someone from a Western organization…came and put IUDs into them and told them, 'this is what you need to come out of poverty.'”

Education rather than contraception is what African women need, Ekeocha said.

“According to you,” Ekeocha responded.

She said Sharma had “better be careful” expressing herself with such “colonial talk.”

“My lifeline out of poverty was education,” Ekeocha continued. “It was not contraception. And there are so many other women who have walked the same path as I have without ever having to take recourse to some contraception provided by the British government or the United States government.”

The lively exchange can be viewed below.