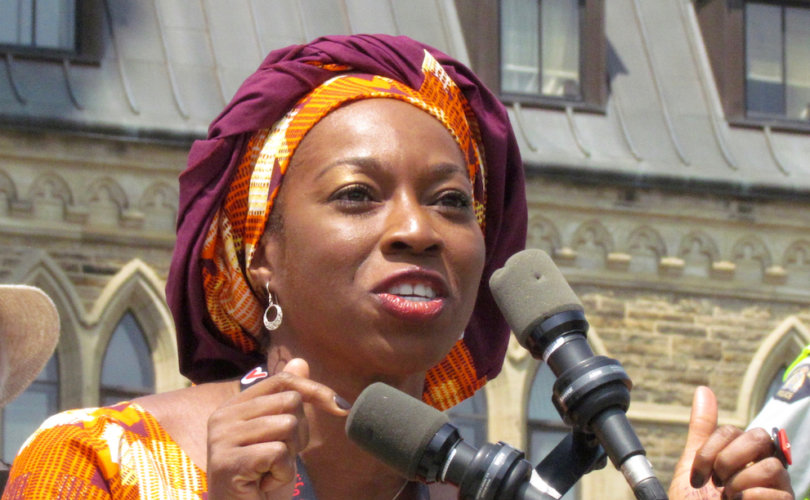 NEW YORK CITY, March 23, 2018 (LifeSiteNews) – A group of African women joined forces with the Holy See and pro-life groups during the United Nations conference on women this week to denounce Western donors for pushing contraception and abortion on African women who don’t want it.

“Africa has been picked on,” noted Nigerian-born Obianuju Ekeocha, founder of Culture of Life Africa, during a panel at the two-week UN CSW62, or 62nd annual Conference on the Status of Women.

That was echoed by three Kenyan women who joined Ekeocha in the discussion on Promoting the Integral Development of Rural Women and Girls in Africa in the Era of Ideological Colonization.

The March 19 event, co-sponsored by the Holy See Permanent Observer to the UN, Campaign Life Coalition, Culture of Life Africa, and Human Life International, was attended by some 350 people.

The “undeniable, incontrovertible, power imbalance between our donors and those who are at the receiving end” is the “gateway for neo-colonialism,” she said.

Africans “overwhelmingly… believe that abortion is the direct destruction of human life. And yet the donors are spending on the exact opposite.”

That was echoed by Akech Aimba, who does post-abortion counseling in Kenya.

She described the “ideological bullying” of Western organizations that set up “illegal abortion clinics” in rural areas in Kenya, and train young doctors from Nairobi to do abortions “to get easy money.”

Moreover, “to get clientele for the abortions, they go out and market irresponsible sexual behavior” by distributing condoms and contraceptives, Aimba said.

And when young girls get pregnant, “they become clients to these abortion clinics in the rural areas.”

Aimba herself had two abortions, at age 18 and 22, and suffered such “emotional and psychological harm” she attempted suicide twice before she was “counseled through it” and experienced healing.

“Abortion robs the African woman, and all other women, of her natural default, which is mothering,” she said.

She has since counseled more than 300 women who suffered post-abortion trauma, with such symptoms of anger, depression, self-harm, suicidal tendencies, and promiscuity driven by a “need to be loved unconditionally, the need to be affirmed.”

Africa is also hit by “ideological colonization” in the form of ‘comprehensive sex education,” according to Joy Brenda Mdivo, a Nairobi-based lawyer and executive director at East Africa Centre for Law and Justice.

The sex education pushed by donors is developed “in some boardroom, in some Western country,” and claims to be age appropriate, but makes children “sexually aware” and encourages sexual experimentation in secrecy, “away from parents,” she said.

“It is trying to say African children don’t have any form of sexual education unless somebody tells them these things, but it’s not true.”

Such education must be “coming from us,” be age appropriate, “developed by the parents, by the teachers,” and “culturally sensitive,” Mdivo said. “Africans themselves are not yet ready for this as it is packaged.”

When African nations apply for development grants, “either ideologically you have to change how you think, or you miss out on crucial funding,” she added.

These include a high regard for motherhood, faith, family and community, and viewing women as the “gatekeepers of the morals and values of African society,” who “don’t want to propagate anything that will harm the innocent lives of their offspring,” said Muchemi, who plans to return to Kenya after completing her studies.

“These are values we hope will continue to be cherished by those who seek to be able to invest and develop our nations,” she said.

Africa consists of 54 countries, populated by one billion people of thousands of tribes and ethnic groups, speaking 3,000 native languages, Ekeocha said, but one constant is that they reject abortion and contraception.

“I have never seen in my life that Africans are going out to the streets to demand for abortion,” Aimba said.“It’s because we don’t look at babies as inconveniences, we look at them as expectations.”

But according to Ekeocha, Western funding for population control programs that push contraceptives and abortion in developing countries increased a jaw-dropping 1,932 percent in 20 years — from $610 million in 1993, to $12.4 billion in 2012.

And of that “spending storm,” 70 percent went to Africa, said Ekeocha, whose book, Target Africa, was released by Ignatius Press in February, and whose documentary, Strings Attached, is in post-production.

“There is a marked reluctance, and a refusal to consider where the Africans stand on certain issues,” said Ekeocha. “In this way the donor becomes the master.”

Indeed, perfectly timed to illustrate the point, Canada’s international development minister Marie-Claude Bibeau sent out a call for proposals that same day on how to improve the “sexual and reproductive rights and health” of women in developing countries.

Entitled Her Voice, Her Choice, the call invites Canadian organizations to propose ways to spend $40 million of the $650 million the Liberals have earmarked to increase global access to abortion.

According to information on Her Voice, Her Choice, “preference will be given to projects” that “take place in sub-Saharan Africa and countries of the Ouagadougou Partnership.”

And “a minimum of 60 percent of initiatives funded will take place in sub-Saharan Africa and countries of the Ouagadougou Partnership.”

Indeed, under Prime Minister Justin Trudeau, Canada “has become one of the top funders and promoters (with your tax dollars) of abortion at the U.N. and around the world, including in countries where it is still illegal,” noted event co- sponsor Campaign Life Coalition. “This is ideological colonization and it needs to stop!”

Archbishop Bernardito Auza, Apostolic Nuncio and Permanent Observer of the Holy See to the United Nations, noted in his opening remarks that Pope Francis warned against “ideological colonization” when addressing the UN in 2015.

The pontiff “has even called this type of development extortion tantamount to a ‘world war … not with weapons but with ideas’,” Auza said.

“We would never intend to criticize development assistance, but when it becomes an instrument of imposition and control over poorer peoples’ and nations’ ways of life and values systems, we have to call it out,” the bishop said.

“The development system should never be used as a Trojan Horse to attack the cultural and religious values of developing nations.”