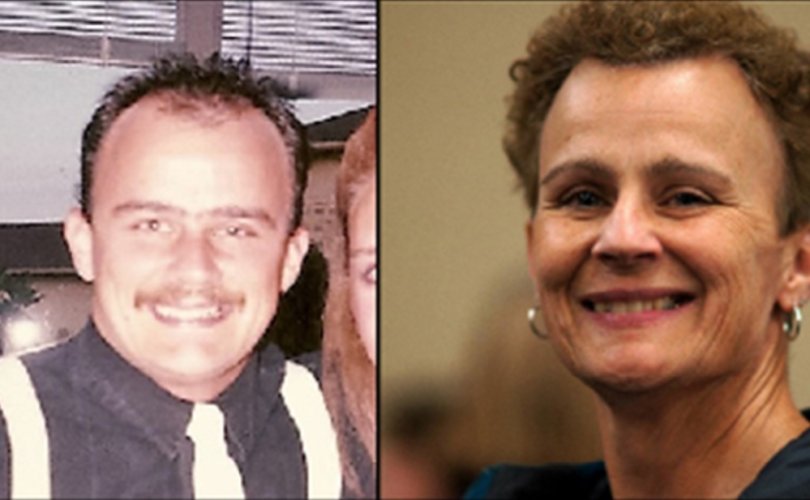 WASHINGTON, D.C,. October 14, 2019 (LifeSiteNews) — A woman who convincingly lived as a transgender man for eleven years and then reverted to the beautiful woman she truly is brought down the house at the Values Voter Summit when she concluded her testimony by declaring, “I’m not the man I used to be.”

While living as “Keith” in her twenties, KathyGrace Duncan had an encounter with Jesus Christ but was not compelled at that time to revert to living as female.

Amazingly, her persona as “Keith” was so credible that no one at her church suspected that she was, in reality, a female. In fact, she was valued as a male leader and was asked to lead a men’s Bible study as well as a junior high school boys’ group.

“I was really convincing,” she told LifeSiteNews.

Duncan is one of nine former transgender individuals who recently filed an amicus brief with the U.S. Supreme Court, hoping to dissuade the court from requiring employers to affirm gender confusion, explaining:

This is abuse. It is abuse to tell a person he or she can select a gender and truly become the opposite sex. It is a false hope. Such a suggestion is factually a lie, a lie with life-long destructive ramifications.

No one suspected she wasn’t a male

Before reaching kindergarten, KathyGrace Duncan believed she should have been born a boy.

“I had watched my dad who was verbally and emotionally abusive to my mom, and I watched my mom crumble beneath that abuse,” said Duncan, leading her to conclude at a young age that women are weak, vulnerable, and “hated.”

“I bought the lie that I needed to be a man hook, line, and sinker,” she recounted, illustrating some of the many triggering mechanisms that so many transgender individuals later recognize as having led them to choose a false identity as a of the opposite sex.

At the still tender age of nineteen, Duncan decided to live as a man. She called herself “Keith” and began a steady regimen of male hormones, causing her voice to drop. She also grew a beard, and her musculature changed to reflect that of a male body. She even began to develop male-pattern baldness.

Finally, “I was confronted by the church,” she said, “and they asked, ‘Who are you really?’”

“When I said I was a woman living as a man, the Holy Spirit ‘blew into me,’” explained Duncan, “and I saw that I needed to go back to being a woman.”

She simultaneously saw that she needed to step down from all the ministries she had been involved with while posing as a man.

“I am thrilled I am a woman”

Her reversal — undoing the damage that male hormones had exacted on her body — began in 1993 and took about five years to complete. Duncan underwent electrolysis to remove facial hair and had surgery to address the damage to her breasts from years before.

It’s been 26 years since she has reverted from living as a male, and Duncan described for LifeSiteNews her newfound freedom in Christ since then.

“I’m no longer attracted to women,” said Duncan, “and I no longer want to live as a man.”

“There’s been a tremendous amount of healing,” she explained, leading to forgiving her dad for the damage caused so long ago.

“I am thrilled I am a woman,” she declared, “and I really want to help others to understand who they are.” Not who they might falsely believe they are, but who they truly are, as God created them to be.”

Duncan made it clear that she did not undergo what is commonly called “conversion therapy.” Instead, her transformation began with God touching her heart, and then, slowly but surely, as she chose to no longer conform herself to the ways of the world, she experienced the renewal of her mind.

“I understood that I am loved” by God, said Duncan, “and I think, really, that’s what I was looking for” all along.

Living as a man and her pursuit of homosexuality are relationship issues, and we’re all just wanting to be loved, explained Duncan. “And when I realized there’s this ‘big God’ who loves me, that was a game-changer.”

To the many young women who have begun to experience “rapid onset transgenderism” and suddenly seek to live as males, Duncan said: “You don’t have to live this way. There is freedom. There is healing.”