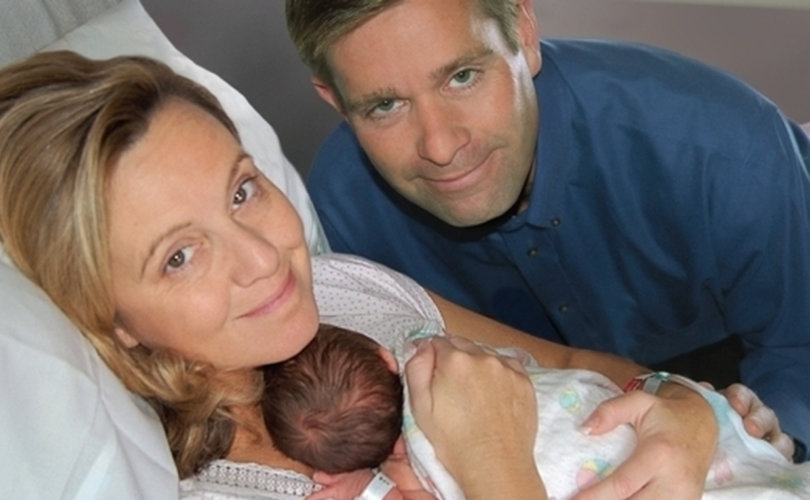 TOLEDO, OH – A Toledo, Ohio woman is expecting her sixth child after becoming unexpectedly pregnant at the age of 45, after 20 years of infertility.

Carolyn Savage has five children, four of whom are the result of assisted reproductive technology – two were products of IVF, and two were born to a surrogate.  She rose to some notoriety in 2009 when she was accidentally implanted with another couple’s embryo and chose to continue the pregnancy and give the baby to his biological parents at birth.  She later wrote a book about the experience, Inconceivable.

Savage discovered her latest pregnancy on April Fools Day.  “I hadn’t been feeling well for a few days and was sitting at my computer one afternoon when I realized I was late,” she wrote in a blog post. “I quickly Googled ‘menopause’ wondering if I’d suddenly started it.”

When her search revealed that “sudden onset of menopause” is not a normal thing, she remembered she had an old pregnancy test stored in a drawer and rushed upstairs to get it.  “I found it, did my business and waited,” she wrote. “A line popped up immediately.  One line.   In that moment I mentally scolded myself for even thinking I could be pregnant.  I’m infertile.  It’s always…ALWAYS… only one line.  But then I realized I was holding the stick upside down and the line that had popped up so quickly was actually in the ‘results’ window.  Just then the second line in the ‘control’ window was peeking through. I was dumbfounded.”

She wasn’t sure how to explain it to her husband, given that it was April Fools Day. “I figured almost anyone I told would think I was joking,” Savage wrote.  “In fact, it actually occurred to me that maybe EPT was trying to punk me.”

“I waited until after dinner to show Sean the sticks,” she wrote. “He was speechless.  When he finally regained his composure he muttered something about thinking maybe we should’ve been ‘using something.’  Of course, neither of us ever gave contraception any serious consideration.  After a 20 year drought we both incorrectly assumed there was not a snow ball’s chance I could simply conceive.  Live and learn.”

Savage and her husband, Sean, have never used contraception in their entire 21-year marriage, but after one spontaneous pregnancy 20 years ago, she had never become pregnant naturally again.  She was diagnosed with unexplained secondary infertility, meaning that there was no physical explanation for her inability to get pregnant – everything appeared to be working normally, for both Carolyn and Sean.

In an article for Today, Savage summarized the medical circus that followed: “countless ovarian stimulation cycles, multiple intrauterine inseminations and more than five IVF attempts … six reproductive endocrinologists threw up their arms, unable to explain why we couldn’t conceive; and after one of those doctors accidentally transferred the embryos of another couple into me resulting in a pregnancy that pushed me to the limits of my sanity.”

“For me and many other women who suffer from infertility, [natural pregnancy] is the stuff of fairy tales,” Savage wrote. “I didn’t get pregnant that way. I needed drugs, ultrasounds, needles, blood work, petri dishes, doctors, surgery and truck-loads of money to conceive. Sean and I have had unprotected sex for our entire 21-year marriage and conceived spontaneously exactly once.”

Savage is thrilled about her latest pregnancy, but also nervous.  Due to her age and her previous history of HELLP syndrome – a rare and dangerous form of preeclampsia – doctors had advised her never to become pregnant again.  That was what led her to seek out a surrogate to carry her two youngest children.  “I am absolutely certain a twin pregnancy would not have ended well if I had been the one pregnant,” she wrote on her blog.

Of this pregnancy, Savage wrote, “It’s not going to be a walk in the park…that’s for sure.  My perinatologist is hopeful, however.  I think we are all hanging our hats on the fact that this was a spontaneous pregnancy and the only other time I’ve conceived this way my pregnancy was text book. … Needless to say, I have a great team of physicans [sic] looking after me.  This pregnancy and my health will be monitored very closely.”

Dr. Thomas Hilgers of the Pope Paul VI Institute told LifeSiteNews that many of the struggles Savage has faced with her fertility over the past 20 years might have been mitigated if she’d had access to NaProTECHNOLOGY, a more natural, less invasive approach to fertility care that focuses on finding and treating the underlying causes of fertility problems as opposed to simply circumventing them.

“One of the biggest problems that one gets into with the IVF situation is that the doctors generally do not look for the underlying causes,” Hilgers said. “In NaProTECHNOLOGY, the whole approach is to find the diseases that are causing the infertility to begin with. Once these diseases are identified, then they can be treated and you can definitely increase the chances of pregnancy significantly.”

According to Hilgers, NaProTECHNOLOGY is much safer than IVF, with fewer complications for both mothers and babies. “[T]he number of multiple pregnancies is 10 times less in NaProTECHNOLOGY than it is in IVF,” Hilgers said. “The prematurity rate is decreased by at least 2, perhaps 3 times than the IVF pregnancies.”  The CDC has also reported that IVF babies suffer birth defects at two to four times the rate of naturally conceived infants.

It is also worth noting that with NaProTECHNOLOGY, there is zero chance of being implanted with the wrong embryo at the IVF clinic, as once happened to Savage, and has happened to many other patients.

Hilgers also suspects that NaProTECHNOLOGY could have helped Savage to avoid the dangerous pre-eclampsia that almost took her life during two of her IVF pregnancies.  “[W]ith supplementation of progesterone during the course of the pregnancy, it is possible, although not definitive, that the HELLP syndrome could have been avoided,” Hilgers told LifeSiteNews.

To contact Dr. Hilgers or to learn more about NaProTECHNOLOGY, visit the Pope Paul VI Institute by clicking here.