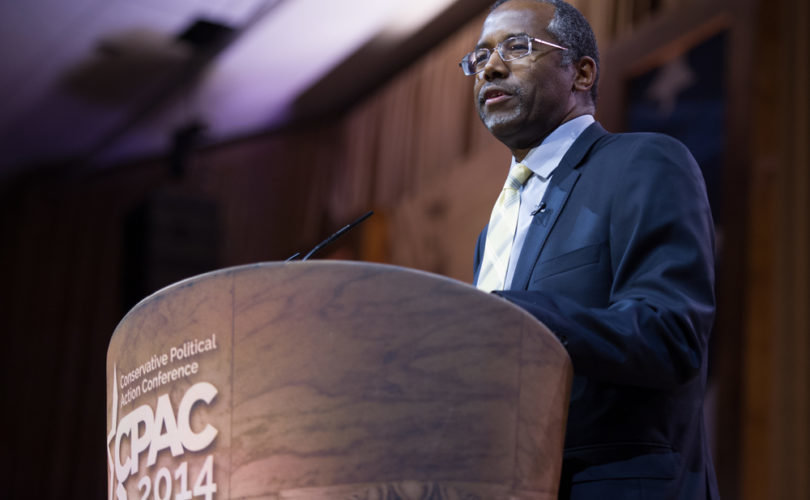 March 5, 2015 (LifeSiteNews.com) — Prospective Republican presidential candidate Ben Carson is backtracking after he faced strong criticism for saying homosexuality is “absolutely” a choice, and claiming this is proved by the fact that many inmates come out of prison as homosexuals.

But his apology is earning him a new set of critics because, though he affirmed his belief in traditional marriage, he also trumpeted his support for homosexual civil unions and defended the right of states to create same-sex “marriage.”

“I do not pretend to know how every individual came to their sexual orientation,” Carson wrote Wednesday in the apology on his Facebook page. “I regret that my words to express that concept were hurtful and divisive. For that I apologize unreservedly to all that were offended.”

“Up until this point there have been no definitive studies that people are born into a specific sexuality,” Carson wrote. “We do know, however, that we are always born male and female. And I know that we are all made in God's image, which means we are all deserving of respect and dignity.”

Carson drew criticism from prominent social conservative Bryan Fischer, who wrote that “sexual impulses may not be a matter of choice, but sexual behavior always is” in a post excoriating Carson for his “cave” on marriage.

Carson’s apology came just 12 hours after he told CNN “New Day” host Chris Cuomo that “because a lot of people who go into prison go into prison straight — and when they come out, they’re gay,” sexuality was therefore a choice. “So, did something happen while they were in there?” asked Carson.

“I’d deny that that is a basis of homosexuality,” said the host. “A lot of people go into jail as a drug addict and come out as criminals. Does that mean that all drug addicts are criminals?”

“Why do gay people want to get married?” Carson responded. “Why do they say they want to get married? Because they want to have various rights — property rights, visitation rights. Why can’t any two human beings, I don’t care what their sexual orientation is, why can’t they have the legal right to do those things? That does not require changing the definition of marriage.”

Shortly after Carson's appearance, conservative Catholic blogger Ed Morrissey heavily criticized the neurosurgeon's comments. “Given that much of what constitutes 'sex' in prison occurs under some sort of duress, using it as an example of 'choice' seems like … a stretch, to say the least,” wrote Morrissey.

By the afternoon, Carson was blaming the media for the opinion he expressed, saying that a pre-recorded interview had been cut to misrepresent what he actually believed. Appearing on Sean Hannity's radio show, Carson said, “I simply have decided I’m not really going to talk about that issue anymore because every time I’m gaining momentum the liberal press says, ‘Let’s talk about gay rights.’ And I’m just not going to fall for that anymore.”