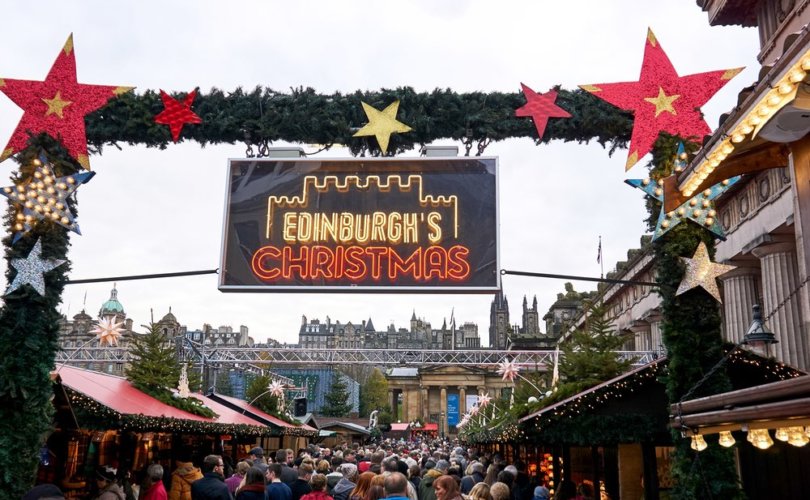 “No,” said Mark, still dazed by the news that his brain tumors, which have stopped growing, had been growing very quickly before his radiotherapy.

“Yes,” I said. “Can he go to Canada for Christmas? It’s an eight hour flight.”

It’s seven, really, but I wanted to be on the safe side.

“Have you bought tickets already?” she asked.

“No,” I said. “We were waiting until we could speak with you.”

The specialist hemmed and hawed about air pressure, wondered if relatives could come to Scotland instead, observed that the medical insurance for Canada would be astronomical, and finally said that if we insisted, she could give Mark steroids to help him through the journey.

“Oh no no no. No, thank you,” I said, slaying my home-for-Christmas dreams. I imagined Mark passing out or growing delirious seven miles over Greenland, and I couldn’t live with the risk. So once again we are trapped on the wrong side of the Atlantic for Christmas.

That said, I am grateful that Mark’s tumors have stopped growing.

When I was a child I enjoyed reading about “Christmas Around the World” and was disappointed that Scotland did not have its own Christmas customs. Christmas in Scotland was well and truly squelched by the Protestant Reformation for centuries. Christmas Day was just like any other working day unless it fell on a Sunday, in which case it was just like any other Sunday, until 1958, when it became a public holiday. Before then it was seen as suspiciously Catholic and somehow unbiblical.

The Scottish traditional winter festival is Hogmanay, or New Year’s Eve. The contemporary Christmas, or “Crimbo,” as it is jocularly called, is largely imported from England and Germany. English Yuletide traditions are fuelled by television ads for supermarkets, which encourage feasting, and for pharmacies and department stores, which encourage gift-buying binges. There are also English Christmas films, like Love, Actually, and Christmas-themed music video specials, to tempt Scots into the English Christmas spirit. Tacky Christmas jumpers (sweaters) are lightheartedly donned from Land’s End to John O’Groats, and every self-respecting town has its Christmas panto performance. Meanwhile, a German-style Christmas market has been a fixture in Edinburgh for almost 20 years. Christmas trees, a tradition brought to Britain from Germany by Queen Victoria’s husband Prince Albert, appear in Scottish homes from December 1.

England, Scotland, and Wales are increasingly secular countries, but nevertheless millions of Britons begin Christmas Eve celebrations by tuning into the BBC’s broadcast of the annual carol service in the chapel of King’s College, Cambridge University. For those willing to brave the Scottish dark, cold, and damp to attend public worship, there are Christmas Eve carol services in several Edinburgh churches and, of course, Christmas Vigil Mass in the Catholic ones.

Now that a large Polish community calls Edinburgh home, traditional Polish Christmas Vigil feasting carries on behind many doors. Some years Mark and I host “Wigilia” supper for Polish friends apart from their families. This is one of those years, although I had to promise Mark not to attempt the 12 traditional dishes on my own. Because Christmas Eve is traditionally a fasting day, Wigilia recipes are vegetarian and alcohol is (theoretically) eschewed. Our compromise with the latter is to clear wine off the table at 9:00 p.m., three hours from the beginning of Midnight Mass.

The Poles exchange their presents on Christmas Eve; the indigenous British tend to unwrap theirs on Christmas morning, as in America. Although we have no children, I am always up early to bake my family’s traditional Christmas morning cinnamon bun. As the flavor always conjures up decades’ worth of happy memories of Canadian Christmases, it is a non-negotiable tradition.

When the sun rises, there are more church services for those Christians who observe Christmas. (The adherents of the Free Presbyterian Church of Scotland, for example, still do not.) Then, of course, there is the traditionally huge family meal, beginning sometime after noon. Alongside the goose, turkey, or ham, there are often chipolata sausages or pigs-in-blankets, which are cocktail sausages wrapped in bacon. Brussel sprouts are considered the traditional Christmas Day vegetable sine qua non. The traditional desserts are flaming plum pudding, fruitcake, and trifle.

At 3:00 p.m., several television and radio stations broadcast the Queen’s Christmas Message. This is also a particularly British tradition, dating back to King George V’s Christmas radio broadcast in 1932. It lasts only ten minutes, and then everyone gets back to their regularly scheduled eating.

When we share contemporary British Christmas with friends and family, it’s all very good fun. For the 53 percent of Britons who don’t have a religion, friends, family, and fun is what Christmas is all about. Being Catholics, Mark and I know better, of course, although being apart from family at Christmastime is rather melancholy.

Still, compared to the persecuted Christians of the Middle East, Africa, and Asia, we have nothing to complain about. Thank heavens the worst Mark and I have to fear on our way to Midnight Mass is a delay in finding a taxicab to take us back. The penal days are over in Scotland, but not, sadly, in so many other places in the world.