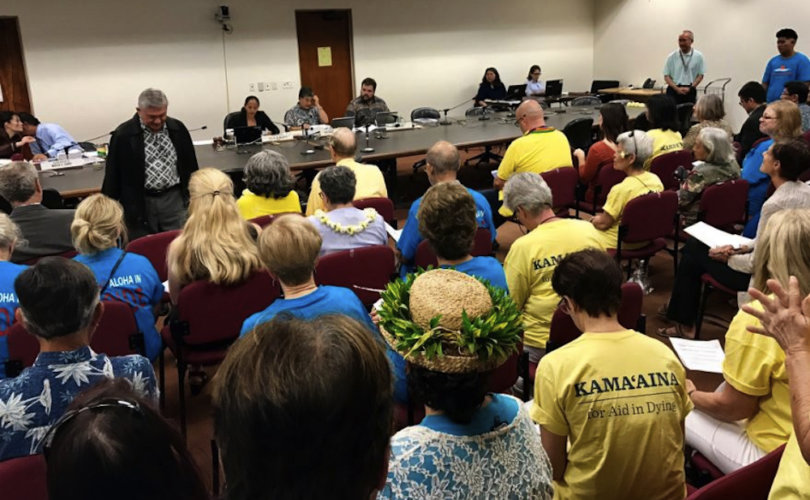 An assisted-suicide bill is discussed at a public meeting in Hawaii.KITV 4 screenshot

The Hawaii State Senate Committee on Commerce, Consumer Protection and Health recommended passage of SB-1129, but after heated debate the state's House Health Committee “deferred” it for changes and amendments.

Patterned after Oregon’s assisted-suicide law, the Medical Aid in Dying Act would transform killing a patient into a legal medical treatment for terminal illness.

SB-1129 expands its prototype Oregon law in many ways, including allowing certain nurses, not just licensed physicians, to both diagnose a patient's terminal illness and to prescribe the lethal drugs to kill him or her.

Other areas of pro-life concern include:

There continues to be political pressure to expand “eligibility.” Oregon has proposed bills that lengthen diagnoses to one year. New Hampshire has twice proposed making diseases eligible for assisted suicide if they merely may cause “premature death.”

Besides, many times diagnoses of terminal illness are simply wrong. In 2000, Oregonian Jeanette Hall was given a terminal diagnosis of six months to live (based on non-treatment). She decided to be euthanized, but her doctor convinced her to be treated.  Last year, she wrote, “This July, it will be 16 years since my diagnosis. If my doctor had believed in assisted suicide, I would be dead.”

Furthermore, predictions of life expectancy are not an exact science but fallible educated guesses. John Norton was diagnosed with Lou Gehrig's disease in the 1950s and told he had 3-5 painful years to live. Instead, the disease stopped progressing completely on its own. In 2012, Norton wrote, “If assisted suicide or euthanasia had been available to me in the 1950s, I would have missed the bulk of my life and my life yet to come.”

Attorney Margaret Dore of Choice is an Illusion testified against the bill. “The act will encourage people with years or decades to live to throw away their lives,” she predicted.

“The act is a recipe for elder abuse, especially for (heirs) in the middle class and above,” Dore stated. “The act creates the perfect crime in which the death is allowed to occur in private, without oversight, and the death certificate gives perpetrators a 'Stay Out of Jail Free' card.”

Dore also criticized the bill's lack of oversight, which she described as “prevent(ing) everyone, including law enforcement, from accessing information.” She said patient identity “is not recorded in any manner” and “all source documentation is destroyed” after one year.

Under the proposed bill, Dore asked, “Will (the legislature) have access to the information needed to evaluate the situation, or will people be killed by their heirs and other perpetrators in a black hole of wishful thinking?”