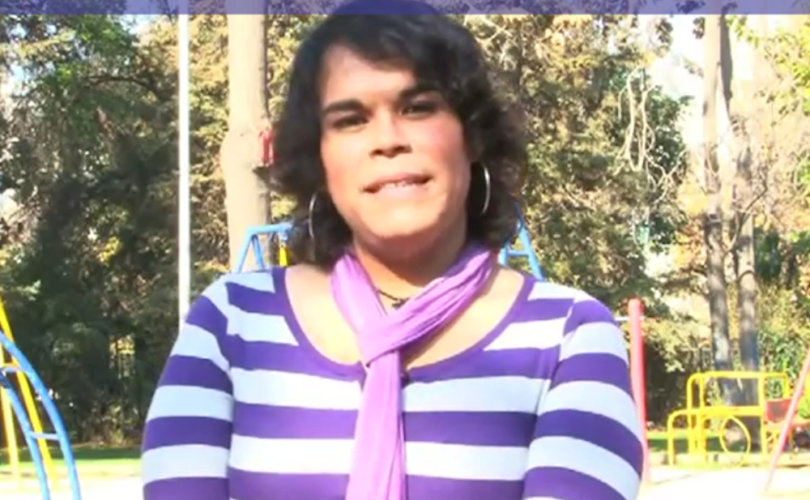 A 'transgender' youth in Chile advocates for 'rights.'

CHILE, August 22, 2017 (LifeSiteNews) – Right after Chile's high court legalized abortion, the country's president announced she will introduce a same-sex “marriage” bill and the Associated Press ran an article on Chileans' “fight for acceptance of transgender children.”

“Chilean LGBTI advocacy group the Movement for Homosexual Integration and Liberation has said the marriage and an adoption bill was reached as part of an [agreement] with Bachelet’s government in 2016,” reported Gay Star News. The definition of marriage will become “a solemn contract by which two people, of the same or different sex, unite themselves, and for life, in order to live together, to procreate and to help each other.”

It is impossible for people of the same sex to procreate on their own.

The AP article began with an anecdote about a Chilean mother who left the country with her six-year-old son and upon re-entering had to explain to officials why he returned as a “girl.”

This “struggle” led Monica Flores “and her ex-husband to launch a legal battle for the rights of their” son to be publicly recognized as their daughter. It “encouraged the families of other trans children to demand greater acceptance and that has fed the broader debate about gender rights in a country so socially conservative that it legalized divorce just 13 years ago,” the AP reported.

Last year, a judge “ordered officials at the civil registry to change the child's name and gender on [his] birth certificate.” The judge said he “couldn't allow [him] to continue living in the wrong body before society.”

The Dominican Republic, Haiti, Honduras, El Salvador, Nicaragua, and Suriname are now the only countries left with laws completely protecting the pre-born from abortion, according to Amnesty International.

“Americans United for Life (AUL) is deeply disappointed that the Constitutional Tribunal of Chile approved a legislative bill … that broadly legalized abortion before viability for the first time in Chile, contrary to the recommendations by AUL and many others to apply the pro-life provisions in Chile’s Constitution and strike the legalization bill,” Forsythe said in a statement. “The Chilean Constitution explicitly states that 'the constitution secures everyone's right to life and to physical and psychical integrity. The law protects the life of the unborn.'”

Forsythe noted that pro-life Chile “had the lowest maternal mortality ratio in Latin America” as of 2012.

“If there is a silver lining,” it's that the Court's 6-4 vote was so close “that the Court merely allowed a legalization bill to go into effect,” said Forsythe. “Unlike the US Supreme Court’s decision Roe v. Wade, the Constitutional Tribunal did not create a constitutional right that would be immune from legislative correction. The Chile Chamber of Deputies and the Senate can repeal this legalization bill once they realize its negative impact on women, their children and the broader society.”

The Chilean Catholic bishops said the court decision is a loss for all of society.

“We are confronted with a new situation in which some unborn human beings are left unprotected by the State in this basic and fundamental right” to life, they said in a statement.

The AP article noted that “the Catholic Church and other traditional forces” oppose the government giving people the right to change “official records of their gender.” Additionally, “the country's Catholic schools association has promised to resist” a government directive to respect “sexual orientation” and self-determined “gender identity” in schools.

A “right-wing” abortion-supporting member of Chilean parliament, Karla Rubilar, told The New York Times, “the Catholic Church still has a lot of power” and that until recently “impeded any progress” in legalizing abortion.