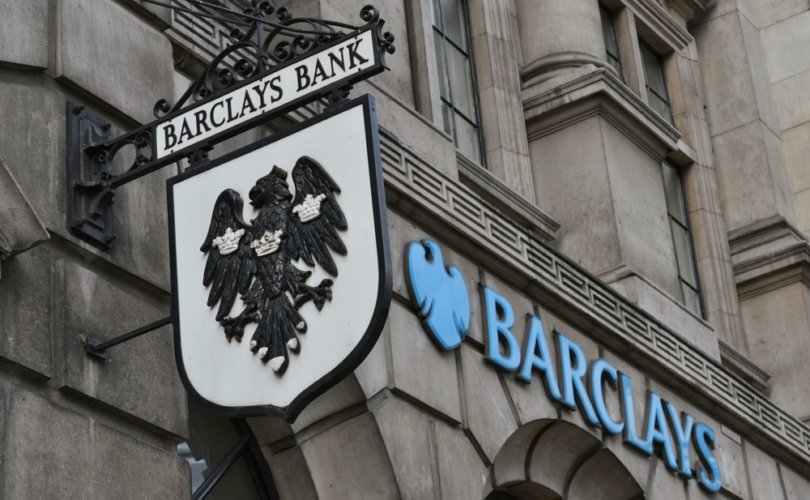 NORTHERN IRELAND, July 27, 2020 (LifeSiteNews) — Two Christian organizations that help people deal with unwanted same-sex attraction and gender identity issues have been notified by their bank that their accounts will be closed.

The move by Barclays Bank follows a social media attack demanding that the bank end its professional relationship with Core Issues Trust (CIT) and The International Federation for Therapeutic and Counselling Choice (IFTCC), incorrectly accusing both groups of promoting “conversion therapy.”

Earlier this month, Facebook and Instagram likewise caved to pressure from activists to cancel CIT, limiting its outreach to and accessibility for people seeking help. Mailchimp and PayPal have also reportedly cut off CIT accounts, crippling the organization’s ability to communicate with supporters or receive donations.

The tweet that launched the attack appeared on July 3:

This vile org is still a tax deductible charity in the UK. The government must act.

This vile org is still a tax deductible charity in the UK. The government must act. pic.twitter.com/4bhTZziu3w

Barclays and the social media giants have knuckled under to gay activists as if they occupied higher moral ground than CIT or IFTCC, identifying their content as “hate speech,” yet CIT’s Facebook page has been barraged with pornographic images — some suggesting pederasty — from activists posting to CIT’s account.

A phone text received by Mike Davidson, who leads both groups, told him, “Kill yourself. You old boomer c—. You’re the biggest piece of s— and I hope you drop dead.  I hope you and your family are raped and killed. Do it. Kill yourself. Just do it.”

CIT’s and IFTCC’s great offense to the worlds of banking and social media? CIT supports men and women with homosexual issues “who voluntarily seek change in sexual preference and expression,” offering “one-to-one support for individuals voluntarily seeking to leave homosexual behaviours and feelings.”

The IFTCC exists to help anyone “experiencing unwanted relational and sexual behaviours, attractions and patterns” and declares, “[P]eople have the right to choose how they live their life.”

Davidson shared with LifeSiteNews example after example of Facebook deleting CIT postings, citing “hate speech” or content that “goes against our community standards.” Here are just a few:

Mob rule, churches are next

“The term ‘conversion therapy’ is being used as a catch-all phrase designed to discredit any help that people may provide to those with mixed sexual attractions who prefer their heterosexual side. This could include a listening ear, formal counselling or spiritual support,” explained Davidson.

“If it is CIT first, it will be churches next,” noted Andrea Williams, chief executive  of Christian Legal Centre, which is aiding both organizations.

“If banks and other service providers start to placate social media campaigns by unilaterally terminating their accounts then the UK will be a very difficult place for Biblically faithful Christian ministries,” added Williams.

In twin letters addressed to CIT and IFTCC dated July 13 — just 10 days after the social media attack began — Barclays Bank offered no explanation for its decision to terminate the accounts, saying only that “we are closing yours in accordance with our Terms & Conditions.”

“You will need to make other banking arrangements with an alternative bank or financial institution,” continued the Barclays letters, “and we will not offer any future banking services.”

The fruit of the Cultural Marxist extremism

Dividson told LifeSiteNews that CIT has submitted a report to the U.K. Parliament’s Petitions Committee, which is currently asking for submissions evidencing online abuse, which CIT has been receiving since June 28.

“We have also submitted the relevant Serious Incident Reports to the Charity Commission of Northern Ireland,” continued Davidson. “We are concerned that the UK Government is about to make legislation ruling against counselling choice for the X-LGBT minority in the UK, without ever having consulted or invited representation form this group. We have therefore requested a meeting with the Secretary of State for Women and Equality, Liz Truss in the hope of explaining our right to access professional and pastoral help.”

“On the Matter of Barclays Bank, the issue has now been referred to lawyers,” said the CIT CEO. “We are concerned that Barclays ranks in the top 30 of Stonewall’s best employers list, and that once again evidence of an inordinately close relationship between Stonewall and influential groups in the UK privileges an ideology inspired by the left that has no regard for faith or truth.”

“We are seeing in the UK the fruit of the Cultural Marxist extremism which has been invited into the public square,” he added. “May God have mercy on us all.”