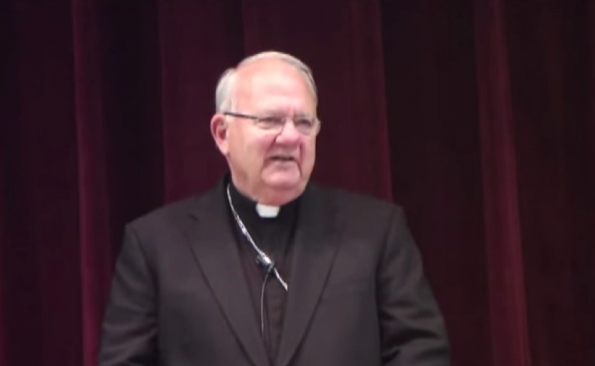 Bishop Robert Lynch made comments which suggest that Catholic teaching on marriage and sexuality somehow breeds contempt for gays.

MINNEAPOLIS-ST. PAUL, Minnesota, October 12, 2018, (LifeSiteNews) – A pro-gay Catholic bishop, credibly accused of sexually provocative behavior toward another man, has been dropped as a speaker at an upcoming diocesan retreat for clergy and parish leaders.

Retired Bishop Robert Lynch, formerly of the Diocese of St. Petersburg, Florida, was slated to speak at a “Formation Day” being held in the Archdiocese of Minneapolis-St. Paul at the end of November.

Archbishop Bernard Hebda sent out a short email Thursday evening to the priests of his diocese, announcing he was dropping Bishop Lynch from the retreat lineup due to widespread parishioner concern:

I understand that many of you have been approached by parishioners concerned about the choice of Bishop Robert Lynch as a presenter at the Archdiocesan Fall Formation Day on November 29.  If you are contacted on this matter in the future, kindly share that Bishop Lynch will no longer be participating.

Bishop Lynch’s poor track record in dealing with sexual scandal in his former diocese plus the presence of homosexual scandal in his own life had made him a curious choice to lead the retreat which aims to address the current turmoil, division, and darkness the Church now faces, brought about primarily by the presence of Catholic clergy who have been active homosexuals.

The event is billed as:

A time of reflection for parish leaders to consider times of turmoil and division in the Church, and where we find faith and hope. What is the role of parish leaders in guiding parishioners to find a durable hope during times of division and darkness?

During his tenure, “The Diocese of St. Petersburg refused to release its priest records and acknowledged it had previously handled sexual abuse complaints without contacting authorities,” reported The Tampa Bay Times in 2002.

In the end, the diocese handed over nearly $6 million dollars to settle sexual harassment claims.

“You have to trust me by getting to know how I live, what priorities I place in my life,” said Bishop Lynch, according to the same Times report. “My life kind of has to be an open book. That is to say, there can't be any secret part to it.”

Yet there was a “secret part” to Bishop Lynch’s life.

In 2003, a married diocesan staff person, Bill Urbanski, received a $100,000 settlement, as reported by Catholic Culture and many other media outlets, because the bishop had crossed “‘boundaries’ by means of inappropriate demonstrations of affection for his Director of Communications.”

According to the Times report:

Urbanski accused Lynch of forcing him to share a room when they traveled, grabbing his thigh and showering him with expensive gifts. At one point when they were in a Santa Fe, N.M., hotel room, Urbanski said Lynch asked to take pictures of him without a shirt so he could superimpose his head on Urbanski's muscular body for Christmas cards. The married father of two said he did as he was told, then vomited in the lobby.

LifeSiteNews reported on a column that Lynch wrote in the Tampa Bay Times in which he indicated that homosexual relationships present no risk to the Church, and in fact can be godly and elevate society and the Church. He wrote:

I do not wish to lend our voice to notions which might suggest that same-sex couples are a threat incapable of sharing relationships marked by love and holiness and, thus, incapable of contributing to the edification of both the Church and the wider society.

In 2016, shortly after the horrific Orlando, Florida shooting in which 49 people were killed at the Pulse Nightclub, which catered to homosexual clientele, Bishop Lynch penned an editorial, suggesting that Catholic teaching on marriage and sexuality somehow breeds contempt for gays:

Sadly it is religion, including our own, which targets, mostly verbally, and also often breeds contempt for gays, lesbians and transgender people. Attacks today on LGBT men and women often plant the seed of contempt, then hatred, which can ultimately lead to violence.

Bishop Lynch’s response contrasts sharply with some of the survivors of the massacre, who rather than blaming or denouncing orthodox teaching on homosexuality, found Jesus Christ and freedom from their same-sex attraction.

Bishop Lynch’s comments over the years dovetail with the comments of other clergy such as Fr. James Martin, SJ, who seek to normalize homosexuality within the Roman Catholic Church.