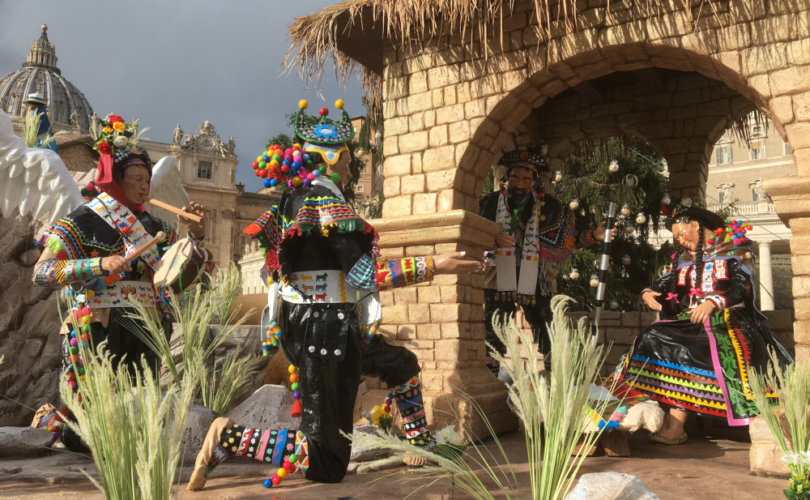 Magi and angel kneeling in adoration before the mangerLouis Knuffke

(LifeSiteNews) — The Vatican’s nativity scene returns to more traditional themes in 2021, in a vast improvement over last year’s display featuring what looked like an astronaut, and a naked man in 2017. Given the dismay and scandal of past years, the faithful in Rome were apprehensive about how this year’s Vatican nativity scene would turn out.

Bystanders at St. Peter’s Square on Thursday said they hoped that pilgrims and “families with little children” coming to the Eternal City to celebrate Christmas would be greeted this year by something beautiful, uplifting, and truly Christian.

The Vatican will officially unveil its nativity scene on Friday at 5 p.m. in St. Peter’s Square. The set is a gift to the Holy See from the Diocese of Huancavelica in Peru. It features a rural stone mountain village scene with a running brook, native llamas led by indigenous herdsmen, a huge eagle, and the very bright and colorful traditional Peruvian attire.

The central figures of the Holy Family, the Magi, and the shepherds are easily identifiable and bear the features of the indigenous peoples of the Andes.

“The clothing is the typical cloth of the local people of Huancavelica, part of the region of the community of Chupaca. This is the people of Chupaca. That’s why you see this traditional black part of the dress, but with elements of other colors,” Jorge Eduardo Román Morey, ambassador of Peru to the Holy See, told LifeSiteNews.

The ambassador said the inspiration for the set was the nativity scene in the Andean city of Chupaca. In different places in Peru, according to local custom and climate, “you will find a local nativity,” the ambassador explained.

Decoration on the set includes local coats of arms and, according to Bishop Carlos Salcedo Ojeda of the Diocese of Huancavelica, reflects the grand scale of the nativity sets of Peru, in which both the government and the Church take great pride. Ojeda explained that in Peru every city sets up a public nativity scene in the center.

According to Natali Luz Santana, the architect of the set, what is offered to the Holy See is similar to the style of other regions in the country of Peru.

Ojeda said the Diocese of Huancavelica was “very proud” to have been asked to present the nativity scene this year for pilgrims coming to St. Peter’s as a witness to the way in which Christmas is celebrated in the Peruvian Andes.

This year’s set stands in contrast to several past Vatican nativity scenes, including the 2017 set that included a naked man and a corpse, the so-called “Nativity of Mercy.” The set was donated by the Abbey of Montevergine, which had in recent years become the focus of Italian LGBT activists.

Last year’s modernist Vatican nativity scene depicted figures that looked like astronauts or were altogether unrecognizable. The set was ridiculed by non-Catholics and dismayed many of the Christian faithful. According to art historian Elizabeth Lev, it had “nothing uplifting or transcendent about it.”

It drew sharp criticism from Archbishop Carlo Maria Viganò, who protested that it was an “arrogant imposition of blasphemy and sacrilege as an anti-theophany of ugliness, the necessary attribute of the Evil One.”

According to Viganò, a true nativity scene “would depict the sublime Mystery of the Incarnation and Birth of the Son of God secundum carnem, the adoring admiration of the shepherds and Magi, the infinite love of Mary Most Holy for the Divine Infant, and the amazement of creation and the Angels. In short, it would depict the state of our soul as it contemplates the fulfillment of prophecies, our enchantment at seeing the Son of God in the manger, our unworthiness for redemptive Mercy.”