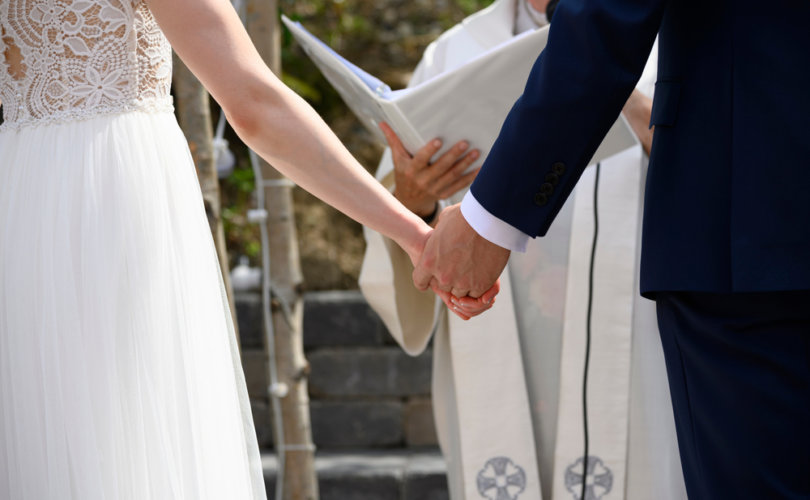 ONTARIO, October 27, 2020 (LifeSiteNews) – The government of Ontario has said it will amend a proposed bill that would force wedding officiants to adhere to a “Code of Practice” after politicians and family groups raised concern that the bill could undermine religious freedom.

Bill 213, Better for People, Smarter for Business Act, 2020 passed first reading on October 6 and recommends changes to a total of 29 Acts.

As it is currently written, Schedule 8 of Bill 213 proposes to amend the Marriage Act by adding wording which – should the bill in its current form become law – potentially force wedding officiants to adhere to a yet to be determined government “Code of Practice.”

Last week, Independent Ontario MPP Belinda Karahalios blasted Bill 213 in an email sent to her followers, saying it is “a direct and permanent threat to religious freedom in Ontario.”

In particular, she pointed out that she was “alarmed” at what she read, and asked her husband, Jim Karahalios, a lawyer who was twice disqualified for running as a candidate for the federal Conservative Party of Canada, to digest its contents.

On Friday, Ontario Minister of Government and Consumer Services Lisa Thompson tweeted out that her government will be revisiting sections of Bill 213 which refer to a “code of practice.”

“Our government is always looking for ways to ensure couples don’t have to worry when it comes to one of the most memorable days of their lives. We will always uphold the notion of marriage, respect the authority of religious institutions, and celebrate religious freedom,” wrote Thompson on Twitter Friday.

“We had a proposal on the table to address issues that occasionally arise for couples getting married, such as fly by night officiants. A code of practice was one potential tool to use to prohibit and deter this bad behaviour…….. At this time, we will look to existing legislation and methods to address it. We will be proposing to amend the section of Bill 213 at committee to reflect this.”

Schedule 8 states that a Minister could strip a person authorized to legally perform a wedding, which would include a bishop, priest, deacon, or pastor if they do not follow the “Code of Practice.”

“The Minister may cancel the registration of a person registered as authorized to solemnize marriage if it appears to the Minister that, (a) the person has ceased to possess the qualifications entitling them to be so registered; (b) the person failed to comply with any Code of Practice set out in the regulations; or (c) the person should not, in the public interest, continue to be authorized to solemnize marriage,” reads section 33.0.3 of Schedule 8 of Bill 213.

In a statement sent to LifeSiteNews, Belinda Karahalios said she has “no doubt” Thompson made her announcement over Bill 213 because of her pressuring the government, but doubts a committee will address her concerns overall.

“Most certainly Minister Thompson made her announcement as a result of the pressure put on PC MPPs after my statement released on October 20th,” said Karahalios in her statement to LifeSiteNews regarding Bill 213.

“I do not trust the Ford government to properly address this matter at committee because they have proven time after time, that they use conservative sounding rhetoric to disguise their implementation by stealth of radical left-wing fiscal and social policies…Bill 213 should be scrapped and returned as new legislation with the two above schedules removed.”

Belinda was kicked out of the Ontario Progressive Conservative (PC) under Premier Doug Ford in the summer of 2020 for voting against a COVID-19 recovery bill.

Belinda and her husband Jim recently announced that they will be creating a new provincial party, called New Blue Ontario, as an alternative to the “corrupt” PC party under Ford.

She also called out Thompson’s promise to revisit schedule 8 of Bill 213 on social media.

“Baloney @LisaThompsonMPP! You make it sound like Ontario is the new Las Vegas! If that was the purpose of the section, the bill would have said that explicitly. The truth is @fordnation cut a nefarious deal to hand over marriage to the state! Very sinister! #cdnpoli #ONpoli,” Tweeted Belinda on Friday.

In her statement sent to LifeSiteNews, Karahalios said that she was scheduled to have nine minutes to debate Bill 213 in the legislature on October 21.

Karahalios said that instead of the government finishing the debate on the bill and taking it to a second reading vote, the deputy government house leader “abruptly closed debate to be continued at a later unspecified date.”

“Therefore, my opportunity to speak to the bill did not come up on that day” said Karahalios in her statement.

LifeSiteNews contacted the office of Minister Thompson to ask if the apparent backtracking of Bill 213 will address concerns raised by some over its alleged attack on religious freedoms.

Linsey Lim, Senior Communications Advisor for Minister Thompson responded to LifeSiteNews saying it was necessary to clear up “some misinformation that was shared by former members of our party,” without referring to Belinda Karahalios by name.

“Let us be clear: Premier Ford, our government, our party, and our constitution will always protect the notion of marriage, religious freedoms, and the authority of the religious institutions that uphold them. We are always looking to see what can be done to ensure couples don't have to worry when it comes to the most memorable day of their lives,” Lim told LifeSiteNews.

Schedule 8 of Bill 213 reads: “The Marriage Act is amended by adding the following section: Compliance with Code of Practice – 20.0.1 Every person authorized to solemnize marriage shall comply with any Code of Practice set out in the regulations.”

Schedule 8 will amend section 34 of the Marriage Act giving the Minister the power to create a “Code of Practice for persons authorized to solemnize marriage.”

It will also add a section which says the “Minister” will keep “a register of the name of every person registered as a person authorized to solemnize marriage, the date of such registration, and such other particulars as the Minister considers advisable.”

Bill 213 was introduced by the Associate Minister of Small Business and Red Tape Reduction Prabmeet Singh in early October.

Jack Fonseca, political operations director for Campaign Life Coalition (CLC) told LifeSiteNews that he believes the goal of Bill 213 as originally written was “to make it easy to expunge Christian marriage officiants who conscientiously object to presiding over a homosexual ‘marriage’, or otherwise, to coerce them into doing so.”

“This is a truly shocking attack on religious freedom and the Church itself, perpetrated by the Doug Ford administration, whom I now want to refer to as Doug Fraud…. With just a scribble from the Cabinet Minister’s pen, he or she will able to turn people of faith into second class citizens who are forbidden by government edict from working in a certain field.”

Schedule 3 of Bill 213 repeals section 3 of the Change of Name Act and takes away the ability for a new married woman (after the bill comes into force) to willingly and automatically decide to take the surname of her spouse.

“Removing the ability of wives to automatically adopt their husband’s family name is clearly driven by someone’s radical, man-hating, feminist ideology. The root of this ideology is found in opposition to all things in society that remind us of God’s authority, which is deemed ‘patriarchal by these feminists,” Fonseca told LifeSiteNews.

“It’s frightening to see Premier Ford pushing a radical feminist and anti-Christian agenda that attacks religious freedom and the right of women who want to adopt their husband’s family name.  I call on all Ontarians to contact their MPP and the Premier and voice their opposition to both these sections of the bill.

In Belinda’s email blasting Bill 213, she said that a woman choosing to take on her husband's surname after marriage, “would now be forced to go through the burden of legally changing her surname by completing an application for a statutory declaration.”

Gwen Landolt of REAL Women of Canada told LifeSiteNews last week that Schedules 3 and 8 of Bill 213 as they are currently written attack women’s rights and one’s religious freedom.

“What difference does it make to a woman, let her decide if she will continue carrying her father’s name, or her husband's name. The question is, what’s going on here, why are they trying to deny a woman the choice if she chooses to assumer her husband's name,” Landolt told LifeSiteNews.

“The answer would be, it seems, it’s undermining a marriage, you know that this is common law, you can live together and be common law, and do whatever……in other words, it’s a decomposing of society. Who told them to do this, and under what basis?”

Landolt called the creation of a “Code of Practice” for those who perform weddings “alarming” and an “interference in religion,” adding because there is no legislative oversight as to how such a code will be created, it is the Minister alone who has the power.

Landolt also told LifeSiteNews that she questions why the Ford government is making these changes now, and who is driving them.

“What’s he doing, whose pressuring him (Ford),” Landolt told LifeSiteNews.

“What’s the purpose of this, it’s really an undermining of traditional marriage.”