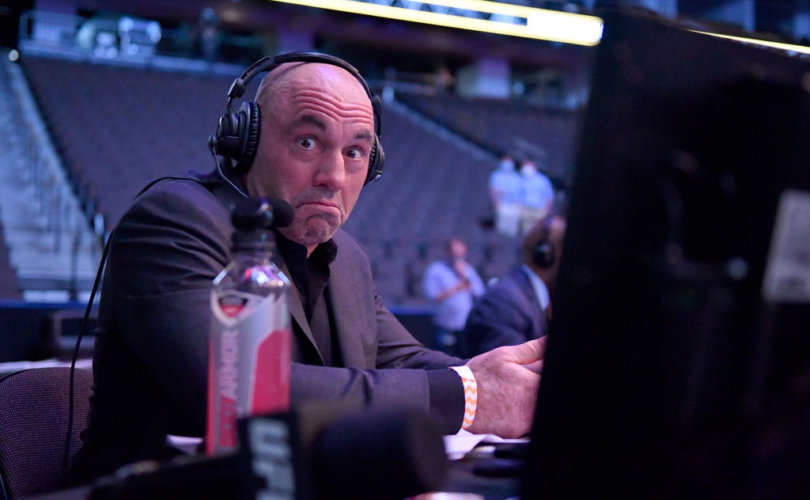 (LifeSiteNews) — As the giant music and podcast streaming service Spotify wavered in supporting its most popular podcast host, Joe Rogan, a scrappy upstart conservative competitor went public on social media with an offer Rogan might find hard to resist.

“Hey Joe Rogan, we are ready to fight alongside you,” declared a tweet from Rumble to the headline-making podcast host. “See the note from our CEO Chris Pavlovski.”

The note offered the left’s most hated media personality du jour a lucrative deal, enticing him to take his show, his sometimes-controversial guests, and his tens of millions of listeners to jump ship to Rumble:

We stand with you, your guests, and your legion of fans in desire for real conversation.  So we’d like to offer you 100 million reasons to make the world a better place.

How about you bring all your shows to Rumble, both old and new, with no censorship, for 100 million bucks over four years.

This is our chance to save the world. And yes, this is totally legit.

Hey @joerogan, we are ready to fight alongside you. See the note from our CEO @chrispavlovski… pic.twitter.com/G7ahfNNjtP

“Joe Rogan needs to upload all his episodes — especially the ones removed by Spotify — on Rumble,” tweeted conservative author, filmmaker, and fellow podcaster Dinesh D’Souza. “Rumble now seems to be the only video platform that protects open debate. Facebook and YouTube are the Pravda and Izvestia of our time, vehicles of state-approved propaganda.”

Joe Rogan needs to upload all his episodes—especially the ones removed by Spotify—on Rumble. Rumble now seems to be the only video platform that protects open debate. Facebook and YouTube are the Pravda and Izvestia of our time, vehicles of state-approved propaganda

“Joe Rogan will never be safe on Spotify.  He will always have to look over his shoulder,” noted D’Souza in a subsequent post. “Move over to Rumble, Joe, and let’s build a new public square where the air is truly free.”

Joe Rogan will never be safe on Spotify. He will always have to look over his shoulder. Move over to Rumble, Joe, and let’s build a new public square where the air is truly free @chrispavlovski

Rogan and his show came under fire from leftists in recent weeks following his explosive podcast discussion with the legacy-media-and-Big-Tech-censored Dr. Robert Malone over New Year’s weekend, in which the mRNA pioneer criticized the ongoing handling of the COVID-19 crisis.

Spotify at first rushed to support Rogan, but that support began to crumble.

When mostly elderly performing artists — such as Neil Young, Joni Mitchell, Nils Lofgren, and Young’s former bandmates David Crosby, Stephen Stills, and Graham Nash — began to pull their music as a public show of protest over Rogan’s interviews with people the left considers to be toxic, Spotify buckled.

Early last week, Spotify announced that it would “add a content advisory to any podcast episode that includes a discussion about COVID-19.”

In an act of censorship, Spotify, reportedly with Rogan’s blessing, has now taken down more than 110 pre-COVID-19 episodes of the Joe Rogan Experience, which allegedly contain infelicitous racial slurs.