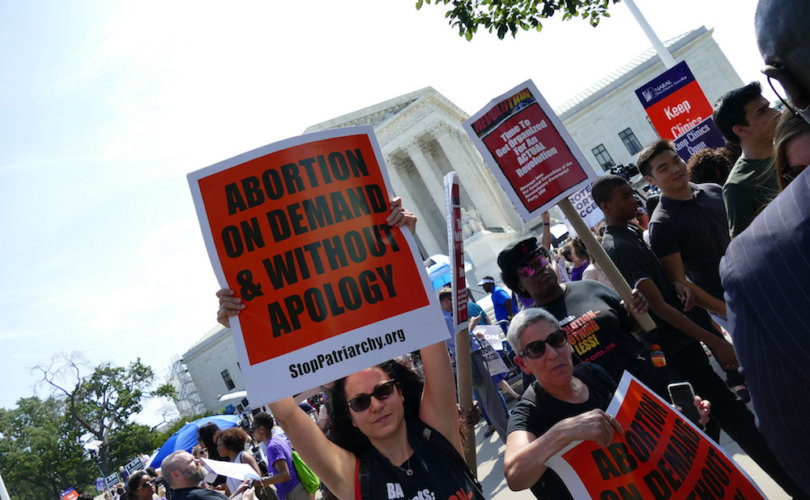 WASHINGTON, D.C., July 1, 2016 (LifeSiteNews) – Buoyed by its victory over a Texas pro-life law at the Supreme Court on Monday, Planned Parenthood announced this week that it will initiate a campaign to roll back health and safety regulations in at least eight more states.

Justices ruled 5-3 that Texas could not require abortionists to have admitting privileges at nearby hospitals, nor ask abortion facilities to meet the same health regulations as other outpatient surgery centers.

Although the majority decision, written by Clinton appointee Justice Stephen Breyer, applied only to Texas, it held that both provisions were medically unnecessary.

Planned Parenthood, the nation's largest abortion provider, announced on Thursday that it will target states with similar legislation on the books: Arizona, Florida, Michigan, Missouri, Pennsylvania, Tennessee, Texas, and Virginia.

“This list is not final,” said Dawn Laguens, Planned Parenthood’s executive vice-president. “No matter how long it takes, these laws will fall.”

These states have enacted similar requirements to the provisions in Texas H.B. 2, which were struck down on Monday. With that decision, “We've reached a tipping point,” said Helene Krasnoff, senior director of public policy litigation and law at Planned Parenthood's political arm.

Proponents of the measures, which shuttered more than half of the abortion facilities in Texas while they were in effect, say they protect women from shoddy treatment following all-too-common botched abortions. Overturning them on a mass scale would allow subpar abortion facilities to remain open at the risk of women's health, they say.

“The Supreme Court's decision in Whole Woman’s Health v. Hellerstedt on Monday will drive down medical standards in abortion clinics in states across the country,” said Americans United for Life’s Acting President and Senior Counsel Clarke Forsythe. “Unlike any other area of American medicine, the abortion industry wants to self regulate, asking women to trust by never verify. It's clear that the abortion industry wants the respectability of the medical profession while refusing to uphold the same high medical standards others comply with, always fighting to keep profits high and standards low.”

More bad news followed Monday's decision, as the justices declined to hear appeals from Wisconsin and Mississippi after lower courts struck down their admitting privileges requirements.

The Attorney General of Alabama, Luther Strange, announced he could not come up with a “good faith argument” to defend his state's “nearly identical” admitting privileges bill shortly after the ruling.

And Pennsylvania State Senator Daylin Leach is asking Pennsylvania to repeal a pro-life law specifically urged by the grand jury that indicted Kermit Gosnell in his “house of horrors” trial.

Planned Parenthood did not make it clear if it hoped to cancel the eight states' laws through legislative action or judicial repeal, although it has signaled it is ready to go to court in Missouri and Tennessee.

“Planned Parenthood consistently will invest in lawyers but not in the health and safety of women,” Forsythe said. “Their latest financial report indicates that revenues exceeded expenses by nearly $60 million dollars. Isn't that enough profit from American taxpayers?”

He noted that, if Planned Parenthood prevails in court against any of the eight states targeted, taxpayers will foot the organization's legal bills.

The legal route may be the abortion provider's only means of success, according to National Right to Life President Carol Tobias.

“The only way the abortion industry has been able to advance the abortion cause is through the courts,” she said.