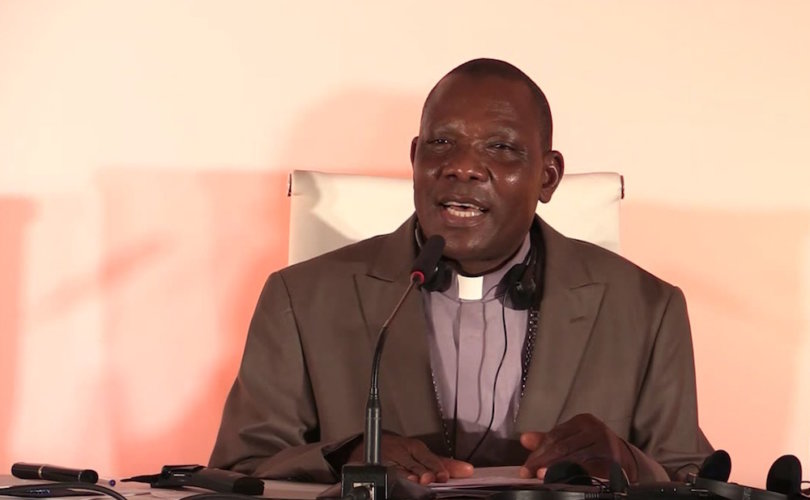 MAIDUGURI, Nigeria, October 10, 2016 (LifeSiteNews) – A Nigerian bishop whose diocese has been a land of terror says that Boko Haram militants responsible for the violence have been suppressed thanks to many who prayed the Rosary for the Blessed Virgin Mary’s intercession.

Two years ago Bishop Oliver Dashe Doeme of Maiduguri says he was inspired by a vision of Jesus to call for Catholics to pray the Rosary for deliverance from Boko Haram’s terrorism, which has taken the lives of more than 11,000 Nigerians, the bulk from the Maiduguri area and most of them Christians, since 2011.

Now, as the Nigerian army boasts it has rooted the insurgents out of their last strongholds and pushed them into the Sambisa forest, Bishop Dashe Doeme is claiming credit for Mary.

“Before, Boko Haram members were everywhere. But now they are not everywhere,” he told the Catholic Herald. They have been pushed to the forests. Boko Haram will soon fizzle out, mostly because of the prayers of the people.”

The bishop experienced his vision in 2014. In it Christ gave him a sword, which immediately turned into a rosary. Christ then said, “Boko Haram is gone.” The bishop said he took Jesus’ message to be, “In order to console his people, that His Mother is there for us.”

So he told the people of his vast diocese in Muslim-controlled Northern Nigeria to believe “that the rosary would ultimately give us victory over this evil. Boko Haram is evil, ISIS is evil. So as long as we go to a place with His Mother, especially by praying the rosary, which is the most pronounced form of Marian devotion, we will be victorious.”

Bishop Dashe Doeme urged the praying of the rosary daily throughout the diocese’s schools, families, and parishes.

The terrorists have been steadily pushed back since then, to the extent that Nigeria’s president, Muhammadu Buhari, said last December that Boko Haram had been defeated. As well, some of the 3.6 million displaced persons have started to return to their homes.

The bishop told the Catholic Herald that the rosary “has worked wonders, has liberated nations.” Citing the Battle of Lepanto in 1571, for example, when Christian naval forces defeated the much bigger fleet of the Ottoman Empire; and in 1986,, when Philippines’ Dictator Fernando Marcos was deposed.

The army too claims credit. Maj. Gen. Lucky Irabor, the commander of the force assigned to defeat Boko Haram, this week announced his troops had expelled the terrorists from “their last known strongholds of Abadam and Mallam Fatori and we are now consolidating our hold.” But this did not mean that “We have heard the last from the insurgents,” he warned. The rebels had taken refuge in the Sambisa forest and would have to be pursued.

Meanwhile Bishop Dashe Doeme says the main challenge is to help refugees return to their homes and repair their lives.

1
Christian cartoonist demonstrates the irony and absurdity of our fashionable ‘woke’ agenda
2
Gov’t database reveals 10,000% increase in cancer reports due to COVID vaccines
3
COVID as bioweapon? Chinese military document shows preparation for ‘biological’ third world war
4
Former White House COVID coordinator admits she didn’t think the jabs would stop the spread
5
It was never a ‘pandemic of the unvaccinated’ and official public health data prove it
Subscribe to Daily Headlines »