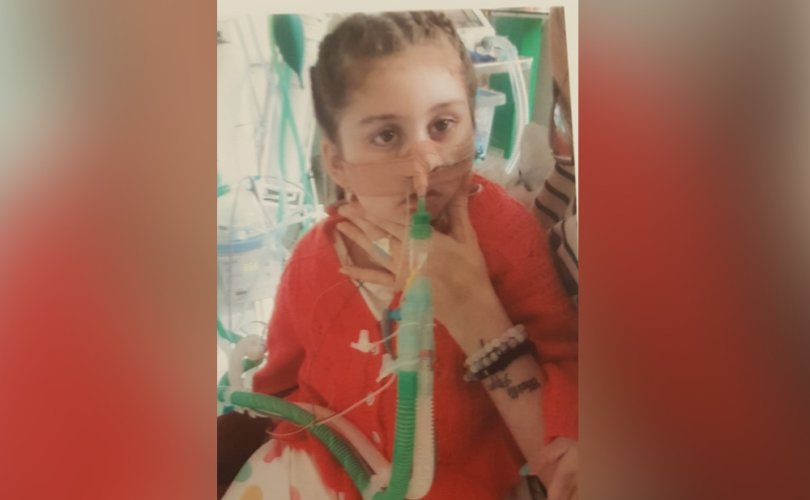 LONDON, England, January 22, 2021 (LifeSiteNews) – A five-year old girl has been handed an effective death sentence by a London court after those responsible for her care won a case according to which they would be relieved of having to continue providing care to severely ill Pippa Knight.

Now, however, she has been given a lifeline by the U.K.’s Society for the Protection of Unborn Children (SPUC), which has offered to pay the family’s legal fees, which could reach up to £100,000, in their ongoing court appeal, according to a press release from the organization.

The young girl at the heart of the issue is Pippa Knight, from Strood, Kent. Pippa has been in hospital for the past two years, suffering a serious illness, with doctors describing her current condition as a “vegetative state.” Pippa’s mother, Paula, herself a widow, has rarely been far from her side, carrying out a bedside vigil at the hospital where Pippa has been treated.

Paula currently resides in charitably provided housing at Ronald McDonald House, Evelina, London: a free home for families of children being treated at the Evelina London Children’s Hospital. The house is just a short walk from the hospital, meaning Paula can be close to Pippa at all times.

The people responsible for Pippa’s care won a case last month in the Family Division of London’s High Court, wherein they would be relieved of having to continue providing care to the sickly girl. Justice Poole, who described the case as “heart-rending,” granted the request, adding that some time should be given before ceasing treatment, to allow for an appeal of the decision.

Following the hearing, Paula said, “I am devastated. I want Pippa to have every possible chance to come home and be with her family.”

Pippa, although born without complications in April 2015, became ill after about 18 months, suffering numerous seizures. Since that time, she has battled with viruses which have left her with brain damage, leading to her being hospitalized for the last two years.

Specialist doctors diagnosed Pippa with acute necrotizing encephalopathy, placing her on life support machinery. Medical staff argued that switching off her life support and ending her life was in her best interest, since she is in a “vegetative state,” without any awareness.

Vehemently disagreeing, Paula argued that Pippa was not in pain, and should be allowed to receive treatment from home: “I don’t understand why the hospital and the court wouldn’t let me find out whether Pippa could come home to be cared for with all her family around her, when two independent doctors from reputable hospitals in England both said that they thought this was worth trying.”

Paula lamented that “[i]nstead, the court has decided that all Pippa’s treatment should be withdrawn so that she dies.”

While Poole admitted that “[Paula] has fought as hard for Pippa as any parent could,” he added that “[r]esponsibility for the decisions in this case lies with the court, not with her,” despite the fact that Paula is the parent and only remaining legal guardian of Pippa. “My conclusion,” Poole said, “is that continued mechanical ventilation is contrary to Pippa’s best interests,” adding that he could not “give weight” to the notion that Pippa’s condition might be improved by moving her back home.

“It is agreed by all the medical witnesses that Pippa has no conscious awareness of her environment or interactions with others. Therefore, there would be no benefit to her from being in a home bedroom as opposed to a hospital unit,” Poole argued.

— Article continues below Petition —
UPDATE: Polish pro-life Catholic passes away in British hospital after being denied food and water (+RIP)
Show Petition Text
29783 have signed the petition.
Let's get to 30000!
Thank you for signing this petition!
Add your signature:
Show Petition Text

The initial case was backed by legal aid, which can provide financial assistance to those making criminal or human rights cases, but Paula was denied this assistance for the appeal. She issued a desperate plea following rejection of legal aid, which was picked up by SPUC, the world’s oldest pro-life organization.

“When my solicitor told me I was so relieved and overwhelmed and I must admit I shed some tears,” Paula said upon hearing that SPUC would finance her case. “SPUC has given Pippa a second chance — and she deserves a second chance.”

“I feel so privileged. And I’m grateful not just for the financial support but for their prayers for Pippa, their faith and humanity and for trying to save her with prayers and love. I know that, as a Christian, I am a great believer in God’s law, and that is to preserve life and respect and care for every human life,” Paula said.

A deeply religious woman, Paula told SPUC: “I have a strong Christian faith and I’m keeping my faith in God. They have tried to talk me into switching off Pippa’s life support. But she’s still there and that is not God’s will. He would have taken her by now if He had wanted her. She is amazing.”

“Pippa has survived the last two years which shows she wants to survive,” Paula added. “I am convinced she knows what is going on. Hand on heart. She is aware I am here and knows her family.”

“Before she was ill, I taught her to pray, she put her hands together and said: ‘Jesus’. I am trying to follow the way of Jesus. To God be the glory. Always.”

Speaking on Pippa’s case, deputy chief executive for SPUC John Deighan said: “All lives are sacred, and we oppose abortion, assisted suicide, and euthanasia in all its forms. We have been deeply moved by Pippa’s plight and Paula’s predicament as this courageous mum does everything humanly possible to protect her daughter and give her the best possible care,” adding that SPUC “could not stand by and do nothing.”

“Our supporters have a wonderful track record of giving generously to defend the right of life in such court cases and I am sure they will respond to our call to help finance this crucial legal battle which now looms.”

“I would urge everyone to dig deep and provide as much as they can to help fund the legal fight to save Pippa and go to our website and make a donation,” he explained, “and we also ask for your prayers too.”

The U.K.’s court system is in the news currently for another case of removing life support, namely of a Polish man living in England. RS, as the man is known, has now been issued a diplomatic passport to potentially receive care in a hospital in Poland.