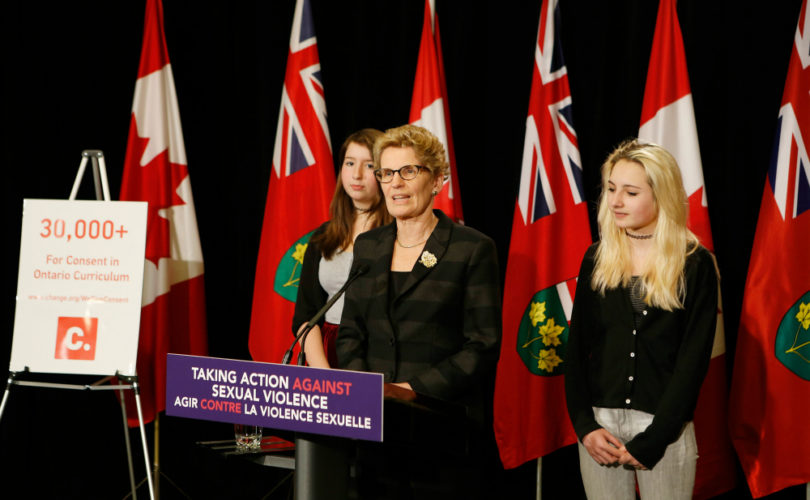 TORONTO, January 30, 2015 (LifeSiteNews.com) — Premier Kathleen Wynne’s use of two 13-year-old girls to promote her new sex-education program is both “bizarre” and “manipulative,” according to parents’ rights and pro-life leaders.

At a press conference Monday the premier appeared with the two brightly-made-up elementary school girls to promote the new sex education curriculum expected to be released to the public this spring.

The girls also presented Wynne with a petition asking her to include “the topic of consent”—as in consenting to sexual intimacy—in the new curriculum. This, their petition explained, was necessary to fight the “rape culture” that “we live in.”

But the effect of such subject matter coming out of the mouths of youngsters was “bizarre” according to Toronto Sun columnist Joe Warmington. “It’s just not every day you see any political leader being lobbied by 13-year-olds, let alone on the subject of sex.”

Explained one of the precocious pair, Lia Valente: “We’re asking for [the curriculum] to teach a lot more than just asking for permission. It’s understanding what is a clear, enthusiastic, affirmative yes, and what consent looks and sounds like, so understanding body language, facial expressions and how the lack of no isn’t necessarily yes.”

Her partner Tessa Hill dismissed abstinence education as a viable alternative: “Whether or not teens are going to be having sex when they’re 13 or 14, learning about abstinence isn’t realistic because sex is a part of society, part of our lives.”  Warmington expressed discomfort at getting “a lecture about sex ed from 13-year-olds in a country where legal consent is 16.”

Without referring to early sexual activity, Wynne promised that “kids will be learning listening skills and helping each other to pay attention to facial expressions and what they mean and whether somebody is positive or negative or happy or sad.”

Jack Fonseca, spokesman for Campaign Life Coalition, said that what had happened at the press conference was “little girls being manipulated by adults, including Kathleen Wynne.”

Fonseca said he doubted the girls had written the petition, whose wording resembled closely that of statements from the Ontario Physical and Health Education Association, an organization long advocating “consent” education. “The whole sex education curriculum is harmful to young people,” Fonseca told LifeSiteNews. “To see these words being put into the mouths of young people is disgusting. It shows the negative impact the new curriculum is having, even before it’s implementation, in promoting the idea that very young children are able to consent to sex. And it sounds like this government may think that starts at grade 1.”

Fonseca added, “This curriculum is under the shadow of Ben Levin, so it’s scary to consider the possibility it may’ve been designed to groom children to be sexually available. If true, woudn’t the grooming objective be facilitated by suggesting to little kids they can consent to sex?”

Levin was the deputy minister of education who oversaw the development of the abortive 2010 curriculum and who recently announced he would plead guilty to child pornography charges.

Dr. Charles McVety, president of Canada Christian College, and a key organizer of the 2010 campaign against the earlier version of the revision, criticized the insertion of consent. “We abhor the premier announcing that Ontario’s teachers will be forced to teach little children how to give permission for that child to engage in sex. … I don’t think it is legal to advise a child before the age of 16 on how to give sexual consent.”

But Wynne and “consent” have their defenders. Janet McDougald, the chair of the Peel School District board who earlier went public with criticism of the government’s lack of real consultation on the revision, told LifeSiteNews, “I believe consent in Grade 1 is about teaching children to respect others, to keep their hands off each other’s bodies.”

McDougald added that the social changes such as the development of social media and same-sex “marriage” mean the current curriculum, released in 1998, needs a thorough revamping. “You have children in school with two moms or two dads. Students need to be prepared for that,” she said. However, she believes the government is creating public alarm by not revealing the content of the revisions to either parents or boards.

Teresa Pierre, president of Parents as First Educators, disagrees. “The adult understanding of consent won't be helped by teaching sex education to younger children.” Pierre cited the increase in the New Brunswick pregnancy rates after sex ed was introduced there 15 years ago.

As for Wynne’s 13-year-old cohorts, she said,  “While it was certainly brave of the girls to make this appearance…the topic was far too adult and the optics were just plain bizarre.”

Pierre used the incident to argue against the fundamental premise behind the sex education curriculum—that early instruction in sexual matters will prevent problems at a later age. “The premier has been saying that the social problem of pressure on women to force sexual consent can be solved by introducing sexual education at young ages.  These two things are necessarily linked, she says.  This is wrong.

“Teaching sex education to students before they are ready just creates more pressure on young people by reinforcing the idea that sexual activity is normal for children,” Pierre added. PAFE has gathered 30,000 signatures on a petition opposing the new sex education curriculum.