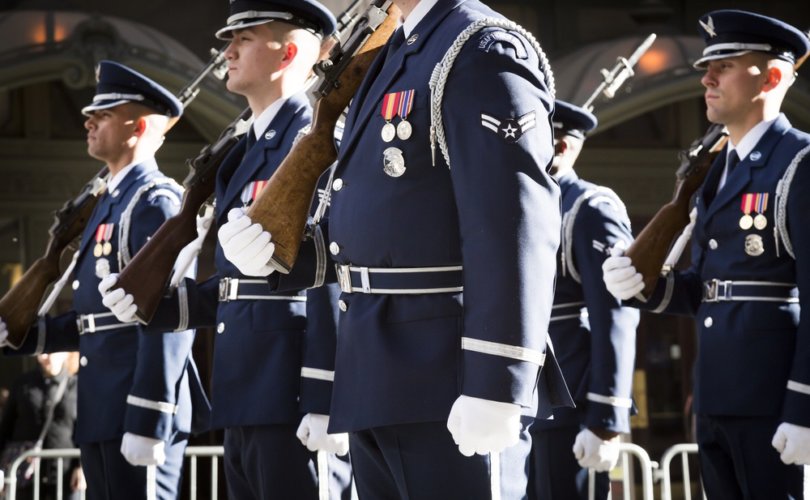 COLORADO SPRINGS, Colorado (LifeSiteNews) — U.S. Air Force cadets are being taught to ditch gender-specific terms like “mom,” “dad,” “boyfriend,” and “girlfriend” for more “inclusive” words as the Biden administration pushes to incorporate woke racial and gender ideology into all facets of American life.

Trainees at the United States Air Force Academy just north of Colorado Springs were given the directions as part of a diversity and inclusion training, Fox News Digital reported Thursday.

According to a slide from the presentation entitled “Diversity & Inclusion: What it is, why we care, & what we can do,” America’s future airmen are instructed to ask people what they prefer to be called, swap out phrases like “you guys” for gender-neutral alternatives like “squaddies” or “folks,” and use “caregiver” or “partner” instead of “mom,” “dad,” “boyfriend,” or “girlfriend.”

Air Force cadets are also urged not to be “colorblind” with regard to race, or to use phrases like “I don’t see color” or “we’re all just people.”

In addition, cadets are instructed to engage in activities to highlight “what risks might be present if we did not fully leverage the diversity of our group?” and told that diversity and inclusion (D&I) training is crucial for “developing warfighters” to be “prepared to lead the USAF/USSF with character.”

Air Force Academy is training cadets to stop using the words ‘mom’ and ‘dad’ because they are offensive. pic.twitter.com/5n8BIdg2Qz

Walz, a ranking member of the House Armed Services Subcommittee on Readiness, told the outlet the content of the training had caused concern among the cadets subjected to the training.

“[I]t’s been a tradition in the military to get letters from mom and dad or your boyfriend and girlfriend for as long as there’s been a military,” Waltz said during an interview with Fox News Digital. “Now we’re instructing every cadet entering the Air Force to not say ‘mom’ and ‘dad,’ to not say ‘boyfriend’ or ‘girlfriend,’ and this kind of drive towards gender neutrality.”

Walz also argued that instead of encouraging cadets to carefully craft their language to avoid offending people based on their race or sexual identity, “the Air Force should be worried about the macro aggressions against America that are happening all over the world.”

The congressman explained that it’s not just the content of the training that’s concerning, but its structure.

In an August 2021 Air Force Academy memo obtained by Fox News Digital, the academy promoted standing up the D&I program to create “champions of dignity and respect to foster an inclusive climate in the Cadet Wing.”

“The structure for D&I Staff will resemble [Air Force Academy Cadet Wing] Character and Honor staffs to reflect that D&I is also an institutional priority,” the memo read.

“To those of us who are a little bit older, it reminds us of what the Soviets used to do or what the Chinese do today, where they literally have political commissars inserted at every level end of the chain of command, but they have a separate reporting chain to ensure that the military is abiding by their ideology and their political doctrine,” he said.

Republican Rep. Jim Jordan of Ohio lambasted the training in a Thursday tweet, pointing out that the Biden administration has is forcing out service members over its draconian COVID-19 jab mandate in addition to imposing woke gender ideology upon them.

First, they kick service members out of the military because they don’t want the #COVID vaccine.

Now, they don’t want you using the words “mom” and “dad.”

No wonder our military can’t hit its recruitment numbers! https://t.co/P0l6ZOEQ76

U.S. Air Force representatives told Fox News Digital in a series of statements Thursday that “there is one chain of command in the military,” and that the academy “does not prohibit the use of ‘mom and dad’ or other gender specific terms.”

“The recent briefing on diversity and inclusion is being taken out of context and misrepresented; the slide in question was not intended to stand alone,” USAFA Superintendent Lt. Gen. Rich Clark said, arguing that the training was meant to teach “respect for others and the warfighting imperative of leveraging diverse perspectives to solve our nation’s most difficult national security problems.”

This isn’t the first time the U.S. military under the Biden administration has made headlines for its promotion of trendy leftist ideology.

In June, a U.S. Navy training video snagged headlines for instructing sailors in the proper use of gender-diverse pronouns using a kindergarten-style approach.

“A good tip for you to remember [a person’s] pronouns next time is to go through a progression of three good things about that person using their pronouns,” the female host told viewers.

“So let’s say the person uses ‘they’: You can say in your mind, ‘They have a good shirt,’ ‘They have a nice smile,’ ‘They are really smart,’ so that it sticks in your brain,” the woman, a civilian engineer, told U.S. military personnel.

Meanwhile, documents obtained by Judicial Watch through a Freedom of Information Act (FOIA) lawsuit against the U.S. Department of Defense (DOD) revealed last summer that U.S. Army cadets at West Point are being taught about radical left-wing agenda items, including “whiteness,” affirmative action, and “queer theory.”