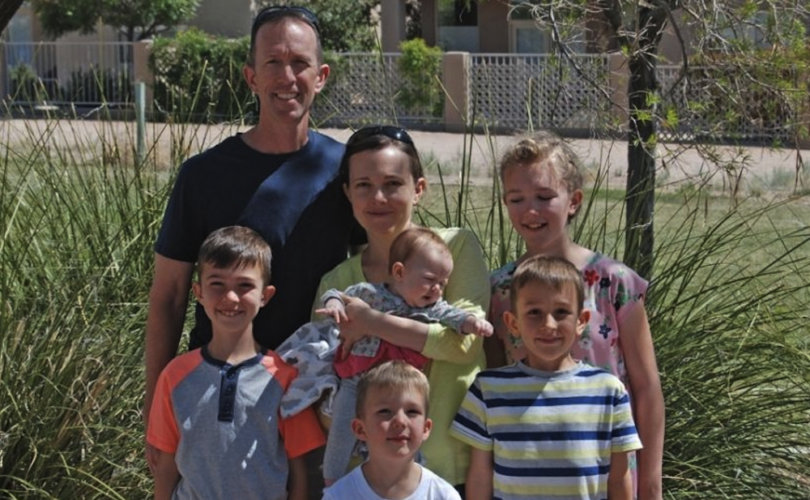 Colonel Leland B.H. Bohannon, commander of the Air Force Inspection Agency at Kirtland Air Force Base in New Mexico, is a highly decorated officer who served his country for more than two decades. He flew combat missions in Iraq and Afghanistan, and throughout his stellar career received the highest performance reviews from superiors. Among the devout Christian’s many commendation medals are the Bronze Star, the Defense Meritorious Service Medal, and the Air Medal.

But just before being promoted to Brigadier General, he was stripped of his command and his elevation was cancelled because he had someone else sign a thank you note.

When a subordinate retires, it is customary but not required to give his or her spouse a certificate of appreciation. The optional note is recognition for the sacrifices spouses of servicemen and women have to make.

When a homosexual Master Sergeant with a male “spouse” retired, Col. Bohannon asked the Staff Judge Advocate and his chaplain what he should do, because of Bohannon’s Christian faith cannot endorse sodomy.

The chaplain suggested the Colonel officially ask his superior, Lieutenant General Anthony J. Rock, for a religious accommodation and someone else to sign the paper.  Rock did not respond.

In the meantime, Major General Sami D. Said offered to sign the certificate. When Bohannon’s request for a religious accommodation came back six weeks later unanswered, Said signed the deed of gratitude.

As the Air Force Deputy Inspector General and a two-star general, Said’s signature was a much higher honor for the retiring Master Sergeant’s “spouse.”

But after the Master Sergeant heard that Bohannon didn’t personally sign, he filed a civil rights complaint. An Equal Opportunity investigator decided Bohannon discriminated against the gay Master Sergeant and officially noted that even if Bohannon had been given a religious accommodation he “would nonetheless be guilty of unlawful discrimination.”

RELATED: ‘Get in line’ or ‘resign’ Admiral tells military chaplain

“This sends a clear message — if you do not have the politically correct viewpoint, you are not welcome in the military,” Berry said. “The military is no longer a place of diversity and inclusion if you are a person who holds to a traditional belief on marriage.”

Bohannon contacted First Liberty, which wrote to the director of the Air Force Review Boards Agency demanding a reversal of the penalties against Bohannon.

First Liberty argued that if diversity, tolerance and religious liberty are truly valued by the armed forces, then they must apply to all, including Christians.

“He was unable to sign because to do so would have caused him to affirm a definition of marriage contrary to his sincerely held religious beliefs,” Berry explained. The Christian then “went out of his way to make sure his Airman was accommodated.”

God and Country pointed out official military policy. “The Department of Defense explicitly — and repeatedly — said no one would have to change their views on homosexuality nor violate their religious beliefs merely because homosexuals were allowed to serve,” the military watchdog blogged.

“Should this action stand, some may perceive the Air Force to have said … that every commanding officer must be willing to proactively affirm homosexual marriage. Not just tolerate, and not just ensure equality within policies and procedures, but personally affirm.  In so doing, the Air Force may open itself to the accusation it has created a ‘religious test’ for service as a commander in an Air Force unit: If your religion will not allow you to affirm homosexuality, you are not allowed to be a commander.”

“The U.S. military says it values religious freedom, tolerance, and diversity,” God and Country concluded. “But increasingly in society, (homo)sexuality trumps not just religion, but liberty in general.”

First Liberty’s demand letter notes that “there is no legal right to a spouse certificate of appreciation” (emphasis in original). Rather, a thank you document “may be issued,” according to the official Air Force Service Requirements (36-3203). Furthermore, there is no requirement that the commander sign the certificate, so it’s not a legal entitlement.

“In essence, the Master Sergeant’s complaint is that the person of his choosing did not sign the certificate,” Berry reasoned.  He quoted the law that defines discrimination as “any unlawful action that denies equal opportunity to persons,” and concluded no equal opportunity was denied.

But Berry didn’t stop with just dismantling the case against Bohannon alone. He went after the entire Air Force’s misinterpretation of the Civil Rights Act of 1964 to include homosexuality, when it clearly meant to protect male/female gender equal treatment.

RELATED: A Congressman leads the fight to defend a military chaplain discriminated against for Christian beliefs on sexuality

Berry argued it was Bohannon’s First Amendment right to freely and without penalty express and live his sincere beliefs that was violated.

“Lt. Gen. Rock should have granted Col. Bohannon’s religious accommodation request, rather than returning it ‘without action,’” Berry said.

As of October 19, Col. Bohannon is no longer listed as the commander of the Air Force Inspection Agency at Kirtland Air Force Base.