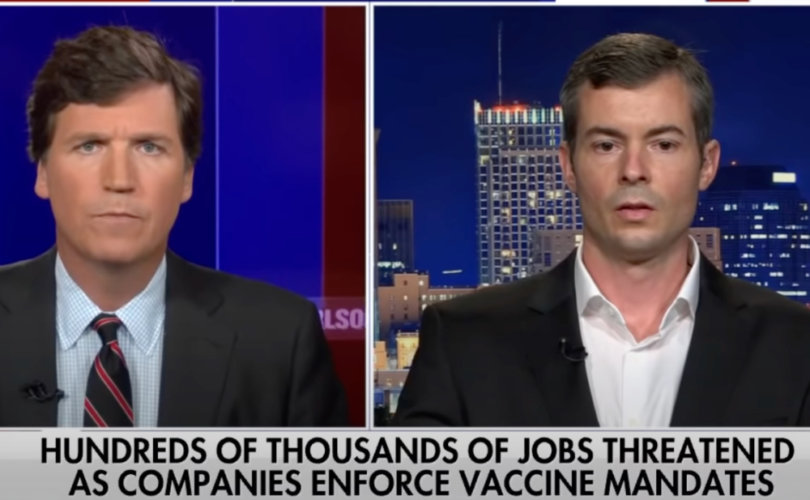 “According to the president’s executive order,” Southwest said in a statement emailed to Bloomberg News, “federal action supersedes any state mandate or law, and we would be expected to comply with the president’s order to remain compliant as a federal contractor.”

On Monday, Abbott issued an executive order stating that “no entity in Texas can compel receipt of a COVID-19 vaccination by any individual, including an employee or consumer, who objects to such vaccination for any reason of personal conscience, based on a religious belief, or for medical reasons, including prior recovery from COVID-19.”

Abbott said the issue is on the agenda of the upcoming Special Session of the legislature, and he will rescind the order upon the passage of legislation.

Some critics of Biden’s federal mandate point out it exists only in the form of a press release. They note that more than one month after the president announced private companies employing 100 or more people must ensure their employees are vaccinated, no such mandate has been sent to the White House’s Office of Information and Regulatory Affairs yet for approval.

Southwest Airlines, which is based in Dallas, canceled more than 350 flights Monday after major disruptions over the weekend, leaving passengers stranded from coast to coast. American Airlines is headquartered in nearby Fort Worth, Texas.

Southwest Airlines and its pilots’ union blame the disruptions on bad weather and air traffic control issues. But other airlines, who fly in the same skies and use the same airports, are not experiencing a similar rate of cancellations and delays.

Southwest pilots who are speaking out say many are calling in sick in protest of the airlines vaccine mandate.

On Tuesday, CNBC “Squawk Box” anchor Andrew Ross Sorkin pointed out in an interview with Southwest Airlines Pilots Association President Casey Murray that the slowdown began after the union last Friday filed a motion in federal court for a restraining order to block the company’s vaccine mandate.

Murray continued to insist that the pilots’ rate of calling in sick was normal. He emphasized that the aim of the lawsuit is “to get the company to sit down and talk with us and discuss some of our issues.”

Significantly, however, among the issues to address, he said, is “natural immunity, antibodies, alternative means of compliance” with the mandate.

The motion for the restraining order said Southwest Airlines, in violation of the Railway Labor Act, “unilaterally rolled out a new and nonnegotiated COVID vaccine mandate for all employees” that “unlawfully imposes new conditions of employment,” threatening “termination of any pilot not fully vaccinated by December 8, 2021.”

— Article continues below Petition —
BOYCOTT United over religious and medical COVID vaccine exemptions
Show Petition Text
19380 have signed the petition.
Let's get to 20000!
Thank you for signing this petition!
Add your signature:
Show Petition Text

The threat of termination came in an internal memo last week from Southwest CEO Greg Kelly.

Monday’s cancellations comprised 10% of Southwest’s schedule. Another 1,400 flights were delayed, about 40% of the airline’s traffic, according to the FlightAware tracking service. On Sunday, more than 1,000 Southwest flights were canceled.

Asked Tuesday at the White House about the conflict between Biden’s announced federal order and the state order in Texas, Press Secretary Jen Psaki said, “We know that federal law overrides state law.”

However, the many Republican attorneys general who are poised to sue the federal government – if and when Biden’s mandate is issued – point to the Tenth Amendment. It states that “powers not delegated to the United States by the Constitution, nor prohibited by it to the States, are reserved to the States respectively, or to the people.”

She goes on to say that this legal aspect is “unquestionable.” pic.twitter.com/3NB4Dc5m8c

Psaki also said the “little hubbub” with Southwest Airlines had nothing to do with vaccine mandates.

“We now know that some of those claims were absolutely false, and actually the issues were completely unrelated to vaccine mandates,” she said.

The pilot said his colleagues don’t even need to talk to each other about what they’re doing. The anger over the mandate, among all Southwest employees, is enormous, he said.

From my dad who is a pilot about the current situation with Southwest airlines pic.twitter.com/44tFnM3tYz

This photo was just sent to me of a grounded Southwest plane flying a Gadsden flag out of the cockpit. The Hero Pilots at Southwest and other Airlines deserve our support. True patriots worthy of the American Freedom Fighter tradition.
Don’t Tread On Me.
God Bless Them 🇺🇸✈️🙏🏻 pic.twitter.com/tAo9pT4Q60

On Monday night, an American Airlines pilot who recently co-founded a group of employees in the transportation industry affected by the mandate, called U.S. Freedom Flyers, told Fox News host Tucker Carlson the mandate’s impact on the airline industry will be far-reaching.

He pointed out that the same thing is happening in the shipping and trucking industries.

“Those Amazon boxes that typically show up in three days, you might be looking at three weeks,” he said.

Yoder said U.S. Freedom Flyers is not promoting a sickout, because it would be illegal.

However, he added, “we also cannot control the actions of individuals, and I think that you will see massive disruptions in the supply chain and in your travel if we stand up and say no.”

U.S. Freedom Flyers says on its website it “encompasses all travel and transportation-affiliated industries, including all employees, unionized or not, who are affected by the Federal Government’s Covid-19 Vaccine Mandates.”

The group says it’s for “anyone who cherishes the freedom to move about the country and the world.”

“From passengers to crewmembers, and everyone in between, this movement is for you, your neighbors, your family and your friends!”

See the interview with Yoder:

Another American Airlines pilot, who says he has 18 years of experience, posted a video on TikTok explaining why he is protesting the mandate.

“If we give in to these mandates, and we do not stand up for our freedom of choice, we dishonor every armed service member over the last 257 years, a disservice to the people who fought and bled for the very freedoms we enjoy,” he said. “Whether you believe in vaccination or not, I’m standing up for your freedom of choice.”