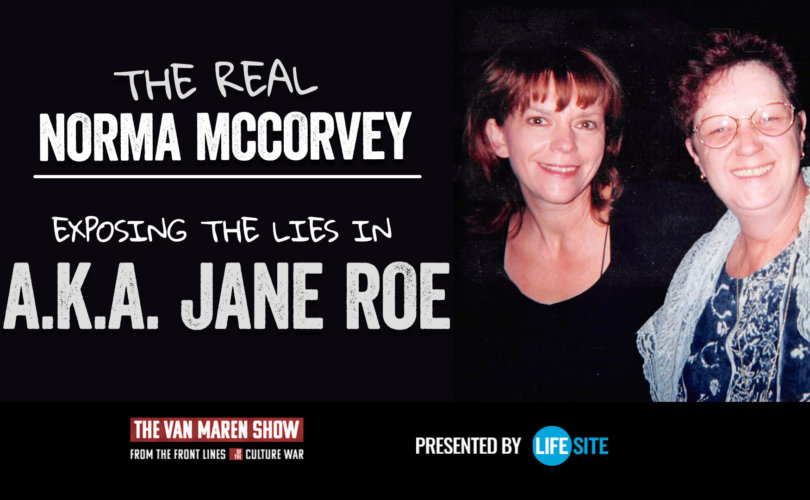 May 27, 2020 (LifeSiteNews) – A documentary released last week claims Norma McCorvey, the Jane Roe of Roe v. Wade, was paid to join the pro-life movement. The documentary, AKA Jane Roe, cites 990 forms showing donations from pro-life ministries to Roe No More ministries, which the documentarians call a bribe.

Watch all the interviews:

McCorvey’s friends have spoken out defending McCorvey since she cannot refute these claims from her grave.

In today’s episode of The Van Maren Show, four of McCorvey’s close friends and confidants join Jonathon in speaking about her dedication to the pro-life movement and remembering her as a person.

Listen to all the interviews:

Lynn Mills met Norma when they were both testifying in National Organization for Women v. Scheidler. Both Mills and Norma knew of each other and were excited to meet. They spent hours in the hotel bar trading stories and getting to know each other.

Mills and Norma corresponded frequently via email and Mills notes the importance Norma placed on her faith. She recalls how fondly Norma spoke of Father Robinson, the priest she met with to learn more about the Catholic faith.

“But her relationship with Christ was genuine. You can't fake Jesus, Jonathan. You just can't fake that,” Mills says.

Mills tells Jonathon that one day she asked Norma if she had a sponsor for entering the Catholic Church. Norma responded, “No, will you be my sponsor?”

Mills tells listeners that Norma was “rough and tumble, genuine but rough around the edges.”

“Norma desperately wanted to be loved. She wanted to be accepted. And after watching the documentary, you can really see how that goes back to her being a very little girl and her relationship with her mother and everything.”

Karen Garnett met and knew Norma thanks to their paths crossing at pro-life events in Dallas. Their friendship deepened as Norma began her journey to Catholicism and the two shared about their Catholic faith.

Garnett recalls one special memory with Norma: Garnett’s first March for Life. The two women traveled together while Garnett was pregnant with her fifth child. Norma took Garnett under her wing and became her protector for the trip. A month later, when her son was born, Norma was there in the hospital praying for Garnett while she labored.

“She had a really, really, really rough life and you cannot undo the wounds and the things that, you know, that had formed you, the way that you had lived, sort of overnight just because you have a conversion.”

Some of the donations to Roe No More ministries came from the Catholic Pro-Life Committee, an organization Garnett was the Executive Director of at the time. Garnett tells Jonathon that the board voted to donate to Roe No More, as they donated to other local pregnancy centers and pro-life causes, at Fr. Robinsons’ recommendation. He shared that Norma’s health was declining due to her traveling to speak across the nation.

The committee knew Norma and wanted to help. The donations helped Norma continue her ministry without needing to travel as frequently as she had been, something that was really detrimental for her health.

Garnett tells listeners that she first heard about Norma’s interviews with Nick Sweeney from Norma’s daughter, with whom Norma was living. Her daughter told Garnett that, “He’s this guy she's meeting with and he's filming a documentary and he takes her out of the care facility and gives her cigarettes.”

This was concerning to Garnett as Norma had serious lung issues and her previous doctor told her that if she started smoking again it would kill her.

Garnett recounts fondly her last phone call with Norma when she told her she loved her one last time before she died. Norma replied, “Love you too, honey.”

Troy Newman is the President of Operation Rescue and was a close friend of Norma’s. Norma actually lived with Newman and his family for a few months when she was evicted from her home for not being able to pay rent.

Newman described Norma as down to earth with a great sense of humor. She enjoyed smoking cigarettes, drinking O'Doul's, and playing pool in pool halls.

“The idea that Norma could be told to say something is absolutely ridiculous for any of us that knew her. If you told her go left, she'd literally go right just to spite you and then laugh and look back and laugh at you.”

Newman tells Jonathon that Norma was broken up about the killing of the unborn and grew to dislike her speaking engagements because she was still so hurt.

In fact, there are multiple times where she would be literally crying and weeping and depressed for days on end over abortion and her name being on it. I spent countless hours with her. There's no doubt she was a broken woman. Anyway, she had a lot of issues early on her life of substance abuse. None of that was a secret. But her conversion to both Christianity and to the pro-life position is, in my mind, 100 percent absolute.

Newman speaks fondly of Norma as a good friend. Having watched the documentary, he doesn’t see the basis for the claims that Norma was “bribed,” but he did enjoy getting to see and hear his dear friend.

Newman shares with listeners that his favorite part about Norma was her humor.

“I just really enjoyed her irreverent sense of humor, her ability to quip little jokes out at people that would literally make you fall on the ground laughing. She just was a true friend. She loved children. She loved all my kids.”

The care and love Newman has for Norma is truly evident in the way he speaks of her in this interview!

Rev. Patrick Mahoney is a pro-life activist and pastor who met Norma at her first big pro-life event after she was baptized into the Christian faith.

Mahoney shares with listeners that the first time he met Norma she seemed emotionally overwhelmed by the love she was receiving from pro-lifers, knowing that she was the Roe from Roe v. Wade.

When asked about the genuine nature of her conversion, Mahoney points to the huge smile that can be seen on Norma’s face after she was baptized – a completely unscripted moment. As Norma was pulled out of the pool in which she was baptized, on her face is a joy-filled grin.

This, Mahoney says, is a great way to see the true Norma – look at her unscripted, candid, unprompted interactions.

“The thing that I loved about Norma is she was so real,” Mahoney tells listeners. “You couldn't coach Norma. I mean, Norma said what Norma said. In fact, if she probably felt coached, she would go the other way.”

Mahoney tells listeners that Norma loved “listening to music in a pool hall” and “being with children.”

“Norma has been an abused enough [in] her life. For these documentarians on her deathbed to abuse her and take advantage of her one more time was truly repugnant and really disheartening. And I couldn’t be more upset with them.”