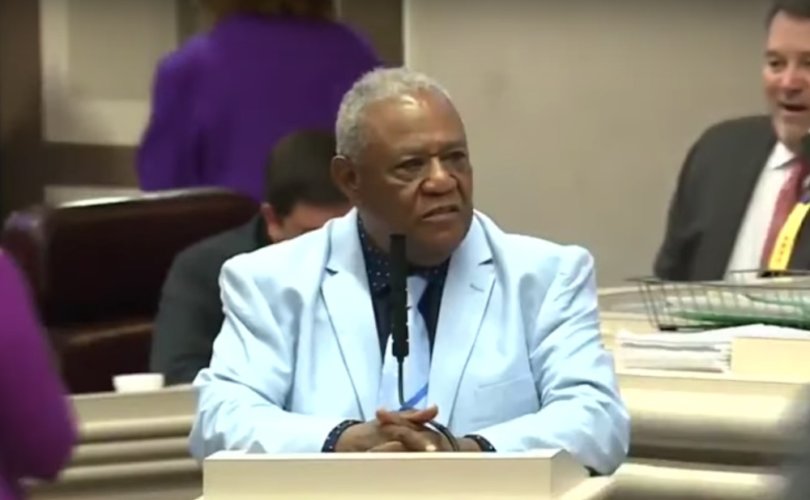 ALABAMA, May 8, 2019 (LifeSiteNews) – Alabama state Rep. John Rogers, the Democrat who rose to prominence after admitting that abortion “kill[s] kids” but defending it anyway, has announced he intends to challenge Democrat Doug Jones for his seat in the U.S. Senate.

“I am now a candidate for United States Senate,” Rogers declared on the floor of the state House Tuesday, Fox News reports. “I’ve already, I’ve got – I’m running for real. I’m not backing down. I’m a candidate. I’ve already – I asked them to give me $1 million, and already $500,000 have come in already. And so if I get $500,000 [in addition], I’ll be an official candidate. I’m telling you right now.”

Amid the debate over the Alabama House’s passage of a bill to criminalize nearly all abortions, Democrat state Rep. John Rogers launched a shockingly blunt defense of abortion on the grounds that “some kids are unwanted, so you kill ‘em now or kill ‘em later.” He also argued that “some parents can’t handle a child with problems,” because “it could be retarded. It might have no arms and no legs.”

Rogers, who identifies as a “personally pro-life” Catholic, claimed in a follow-up interview that he was trying highlight the supposed double-standards of pro-lifers when it comes to valuing life due to their views on issues such as food stamps and Medicaid expansion. But he quickly reverted to his original tone in response to criticism by the president’s son, Donald Trump Jr.

“That proves I’m right to make a scene about abortion, him being born, that’s proof right there,” Rogers said, laughing. “Him being born, that’s a very very good defense I have for abortion. His mother should have aborted him when he was born and he wouldn’t have made that stupid statement, right? He’s evidently retarded or crazy.”

Jones, who in 2017 won the previously-Republican Senate seat vacated by former Attorney General Jeff Sessions, commented to the Washington Examiner he was “absolutely appalled” by Rogers’ comments, and “think[s] he owes an apology to the people of the state.”

During a Monday radio interview, Rogers apologized only for using the word “retarded,” and claimed that Jones had contacted him privately to assure him that he agreed with Rogers’ first abortion comments and only issued his public disavowal for political expediency. “He told me, ‘Doug, John, I know you’re right but I got to come out against you,’” he said. “I said, ‘OK.’ I said, ‘Fine, if it’s going to help your campaign, do that.’”

Yellowhammer News reports that Jones has not explicitly denied Rogers’ version of the talk, instead saying only that he’s “disappointed he made our private conversation public.” A second phone call between the two men, motivated by Rogers’ Trump Jr. comments, was more hositle, and reportedly sealed Rogers’ decision to run. “Shut up. [You’re] killin’ me,” Jones said according to Rogers.

“Look, we are just going to have to agree to disagree on this. I made my position clear,” Jones said in a statement to the Examiner. “I thought his remarks were appalling, and I told him that I strongly disagreed with him. There is already too much division in our politics, and I won’t add to it here. With that, that’s all I’m going to say on this matter.”

Jones presented himself as moderately pro-”choice” during the 2017 campaign, saying that he supported restricting late-term abortions “except in the case of medical necessity.” But when the Senate voted in January 2018 on a late-term abortion ban that contained the exception he claimed to require, Jones joined his fellow Democrats in opposing it. Earlier this year, he did break ranks with Senate Democrats in voting to require medical care for newborns who survive abortions.