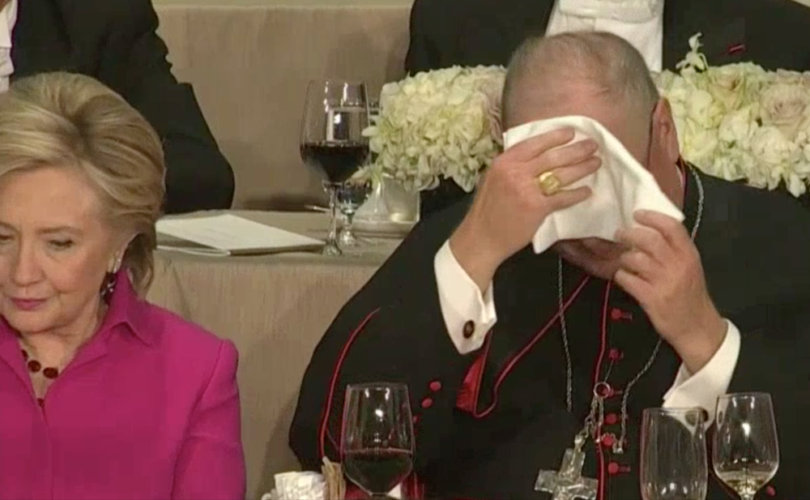 NEW YORK, October 21, 2016 (LifeSiteNews) – Tensions were heightened going into the New York Archdiocese's high-end Al Smith Dinner Thursday night as rival presidential candidates Donald Trump and Hillary Clinton were set to appear side by side just one day after facing off in the heated third and final debate of a particularly polarized campaign.

With Clinton and Trump as special guest speakers, the 71st annual Alfred E. Smith Memorial Foundation Dinner for Catholic Charities of the Archdiocese of New York raised a record $6 million-plus.

The $3,000-per-plate affair brings out high-profile guests during election years as well as joint appearances by opposing presidential nominees.

And typically the candidates roast themselves and one another in light-hearted speeches. But with this year’s event coming on the heals of hacked emails revealing anti-Catholic bias by high-level Clinton campaign staffers, leading New York Cardinal Timothy Dolan to say earlier this week that Clinton owes Catholics an apology, the gloves were off between both the candidates. Some in the audience jeered Trump for calling Clinton out on that and other scandals.

Trump was the first speaker and the mood was light. He received laughs with his jabs at Clinton, until he brought up corruption, yielding unprecedented boos and heckling between that and his mention of the WikiLeaks email scandal.

Trump had joked that Clinton was so corrupt she’d been removed from the Watergate Commission. He also teased about the WikiLeaks email revelation indicating Clinton told a private, paid speech audience that “you need both a public and a private (policy) position,” before then jesting that Clinton was sitting there in public pretending not to hate Catholics.

The WikiLeaks email revelations have also included Clinton’s campaign Chairman John Podesta saying Clinton had begun to hate everyday Americans by the time she announced she was running for president.

Some in the crowd also heckled Trump’s joking references to the WikiLeaks revelation of Democrat National Committee Chair Donna Brazile having received a debate question for Clinton in advance of CNN Democratic primary town hall for Clinton earlier this year, and Clinton’s testifying numerous times that she couldn’t remember facts about which she was being questioned by the FBI and in other investigations.

The humor in the dinner speeches usually wraps into a more serious conclusion, at which time Trump told the crowd, “We can also agree on the need to stand up to anti-Catholic bias, to defend religious liberty, and to create a culture that celebrates life,” to polite applause from some, including Cardinal Dolan.

Clinton took the podium after him and made her own jabs at Trump, including his refusal to agree not to contest the election. She also pegged him on an alleged alliance with Russia, objectification of women, and his suggestion Clinton should be drug tested before the last debate. Clinton’s jokes were better received than Trump's.

Clinton’s endeavor to seriously address anti-Catholic prejudice eschewed the WikiLeaks scandal and instead reached back to anecdotes from Smith’s 1928 run for the presidency, and her appeal to the Catholicism of the crowd involved invoking Pope Francis.

“Now I’m not Catholic, I’m a Methodist,” Clinton said, “but one of the things that we share is the belief that in order to achieve salvation we need both faith and good works.”

“And you certainly don’t need to be Catholic to be inspired by the humility and the heart of the Holy Father Pope Francis, or to embrace his message,” she said to a warm response. “His message about rejecting a mindset of hostility, his calls to reduce inequality, his warnings about climate change.”

And in a shot at Trump during the serious part of her talk, using the Holy Father’s rebuke of Trump’s stance on illegal immigration, Clinton threw in, “his appeal that we build bridges, not walls.”

She went on to remind the audience of her running mate. “Tim is Catholic and went to Jesuit schools,” she said, adding that the two had been talking about the Jesuit philosophy of Magis, which refers to doing more for Christ, thus doing more for others.

“Well, we need to get better at finding ways to disagree on matters of policy,” the fervent abortion advocate said, continuing on after Trump, “while agreeing on questions of decency and civility.”

Clinton had just the night before at the debate adamantly affirmed her support for gay “marriage” and abortion, even late in pregnancy, including defense of the partial-birth procedure, while Trump reiterated his pledge to nominate pro-life Supreme Court judges.

Trump had also taken Clinton to task early in the debate over her support for late-term abortion, making the strongest and most thorough statement against the procedure in a presidential debate.

“Well, I think it’s terrible,” he said. “If you go with what Hillary is saying, in the ninth month, you can take the baby and rip the baby out of the womb, just prior to the birth of the baby.”

The Al Smith Catholic Charities dinner has been the source of controversy for years. Catholics and pro-life leaders see that the platform provided pro-abortion and gay “marriage” politicians at the Catholic event, exacerbated by the photo opportunity alongside Church leaders, results in scandal created by the erroneous impression the Church accepts these two grave evils.

The controversy began to escalate in 2008 when then-Illinois Senator Barack Obama appeared at the dinner with Arizona Senator and GOP candidate John McCain, given Obama’s record of ardent abortion support, already documented by his votes against the Illinois version of the Born Alive Infant Protection Act in 2001, 2002, and 2003.

The controversy peaked four years later in 2012 when Obama appeared alongside GOP presidential nominee Mitt Romney, with Obama’s imposition of the HHS Contraception Mandate forcing Catholics and other Christians to subsidize birth control, and his avid support for gay “marriage” added in.

Some have called for an end to the candidate appearance at the dinner.

Cardinal Dolan is the president of the Board of Directors of the Alfred E. Smith Memorial Foundation and told “Fox & Friends” several weeks ago that the annual fundraiser is intended to bring together politicians in “a real climate of amity.”

Watch the speeches below: