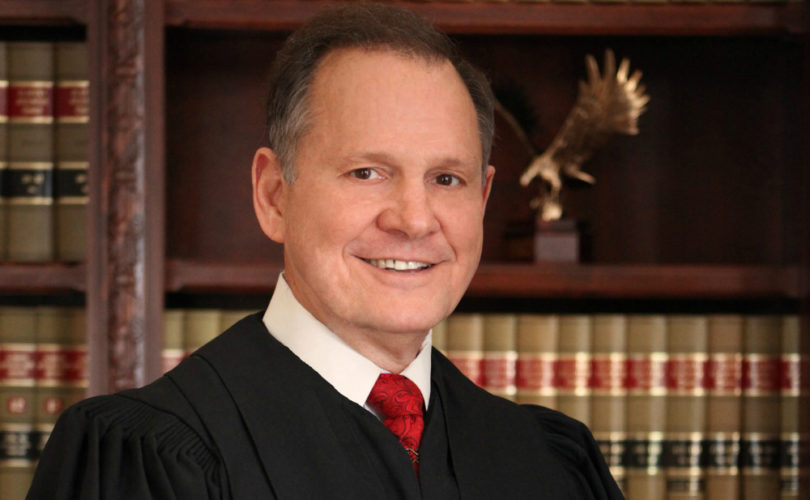 Moore now faces charges in the Alabama Court of the Judiciary, which could remove him from the Court if they find he’s violated the Alabama Judicial Canons of Ethics or engaged in misconduct.

The charges focus on Moore’s January 2016 Administrative Order, in which he wrote that state probate judges should “not…issue any marriage license contrary to the Alabama Sanctity of Marriage Amendment or the Alabama Marriage Protection Act.”  Moore instructed judges to not act contrary to state laws defining marriage as the union of one man and one woman until the Supreme Court rules on the effects of its landmark same-sex “marriage” ruling Obergefell v. Hodges on the Alabama Supreme Court’s existing orders upholding the state’s marriage laws.

“The Judicial Inquiry Commission has no authority over the Administrative Orders of the Chief Justice of Alabama or the legal injunction of the Alabama Supreme Court prohibiting probate judges from issuing same-sex marriage licenses.  We intend to fight this agenda vigorously and expect to prevail,” said Moore.

LGBT activists lobbied the JIC to investigate Moore for ethical misconduct as part of their campaign to remove Moore from office.  The Southern Poverty Law Center (SPLC), a longtime opponent of Moore over his defense of religion in the public square, along with the Human Rights Campaign (HRC) and other atheists and LGBT supporters, filed complaints against Moore with the JIC.  At a pro-same-sex “marriage” rally on January 12, a free notary was on hand to formalize activists’ form complaints against Moore.

Moore previously called the complaints against him “politically motivated” and baseless.  The SPLC first filed a complaint with the JIC against Moore in 2015.

“The Alabama Supreme Court has repeatedly slapped down the JIC for wading into legal arguments and has reminded the JIC it is not a court of law. Yet, the JIC has once again veered from its duty and now seeks to resolve a legal dispute that can only be resolved by the Alabama Supreme Court and the U.S. Supreme Court,” said Mat Staver, Founder and Chairman of Liberty Counsel.  Staver is representing Moore in this matter.

“Chief Justice Roy Moore has disgraced his office for far too long,” SPLC President Richard Cohen wrote in a statement.  “He’s such a religious zealot, such an egomaniac that he thinks he doesn’t have to follow federal court rulings he disagrees with…We look forward to his trial in the Court of the Judiciary and his eventual removal from office once again.”

In 2003, the Alabama Court of the Judiciary removed Moore from office for refusing to obey a federal court’s orders that he remove a statue of the 10 Commandments from the Alabama Judicial Building.  He was re-elected as Chief Justice in 2012.

The HRC also applauded the decision.  The group gathered and presented to the JIC 28,000 signatures on a petition urging for Moore’s removal.

The majority of judges brought before the Alabama Court of the Judiciary face disciplinary action, which ranges in severity.

Moore will continue to be paid during his suspension until the Alabama Court of the Judiciary rules.