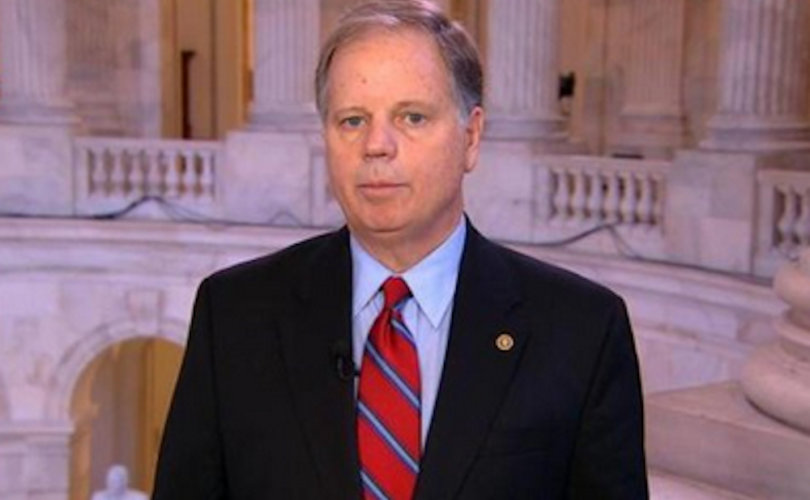 WASHINGTON, D.C., February 20, 2020 (LifeSiteNews) – Alabama Democrat Doug Jones took over the U.S. Senate seat previously held by Republican Jeff Sessions partly on the premise he was an abortion moderate, but his latest reaction to being pressed on the issue suggests he has all but abandoned such an image.

A video uploaded to Twitter on Wednesday depicts someone identified as a constituent calling out “good morning” to Jones as he’s walking through a parking lot. Apparently recognizing the questioner, Jones asks, “What stupid question do you got for me today?” before he can get the question out. The constituent repeats, “Do you think abortion should be banned after five months?”

In response, Jones laughs and says, “As I said, what a stupid question,” while continuing to walk past the man. The questioner responds, “You’re voting on it next week, sir,” to which Jones replies, “Yeah, and I’ll vote on it next week, just like I did the last time.”

Constituent: “Do you think abortion should be banned after 5 months?”

Doug Jones: “What a stupid question.”

In January 2018, Jones joined his fellow Democrats in voting against the Pain-Capable Unborn Child Protection Act, which would have banned most abortions starting at five months. The vote was a reversal from his previous claims to support such a ban as long as it contained an exception for “medical necessity,” which the bill did. At the time, the Alabama Senate passed a resolution formally condemning Jones for going back on his word.

A year later, Jones did break ranks with his party in voting to guarantee medical care for newborns who survive failed abortions, a modest defense of life that was mainstream in the Democrat Party as recently as the early 2000s. His latest comments, however, indicate he has no qualms about continuing to defend late-term abortion.

After Moore won the GOP nomination, allegations surfaced that he had engaged in inappropriate relationships with underage girls, and that he had committed sexual assault. Moore strenuously denied them, with defenders raising doubts about the accusers’ stories and questioning why none of the claims had surfaced in Moore’s previous campaigns.

Nevertheless, with it being too late to replace Moore on the ballot, Republicans were divided on how to move forward. Trump endorsed him and some called for simply electing him and leaving the charges for the Senate Ethics Committee to investigate, while others proposed either delaying the special election or replacing Moore with a write-in candidate.

Jones’ upset is likely to be short-lived, however. Six Republicans are currently running to reclaim the Senate seat for the GOP, including Sessions and Moore. The top three contenders – Sessions, former Auburn head football coach Tommy Tuberville, and U.S. Rep. Bradley Byrne – all currently poll between nine and 13 points ahead of Jones in head-to-head matchups.