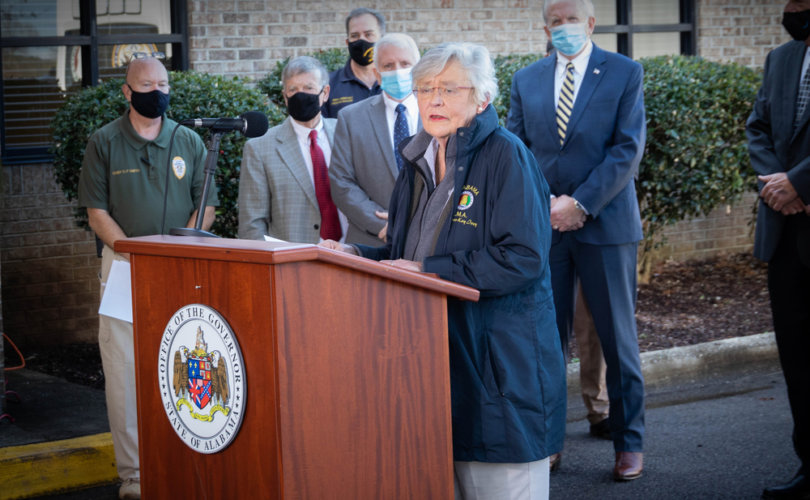 MONTGOMERY, Alabama (LifeSiteNews) – Alabama Gov. Kay Ivey on Friday signed into law a ban on “gender transition” procedures for children and a bill modeled after Florida’s Parental Rights in Education law that cracks down on LGBT ideology in elementary school classrooms.

“There are very real challenges facing our young people, especially with today’s societal pressures and modern culture. I believe very strongly that if the Good Lord made you a boy, you are a boy, and if he made you a girl, you are a girl,” Gov. Ivey said in a statement.

The bill, sponsored by Republican state Sen. Shay Shelnutt, also bans sterilizing surgeries for minors, including “castration, vasectomy, hysterectomy, oophorectomy, orchiectomy, and penectomy,” as well as procedures that “artificially construct tissue with the appearance of genitalia that differs from the individual’s sex.”

Doctors who prescribe “gender transition” drugs to kids or perform mutilating transgender surgeries on them can face felony charges and up to ten years of jail time under the new law.

The bill additionally blocks school officials from withholding a child’s gender confusion from his or her parents.

“We should especially protect our children from these radical, life-altering drugs and surgeries when they are at such a vulnerable stage in life,” Ivey said on Friday. “Instead, let us all focus on helping them to properly develop into the adults God intended them to be.”

SB 184 takes effect 30 days after the governor’s signature. Multiple pro-LGBT activist groups, including the Transgender Law Center and the American Civil Liberties Union, have said that they will sue to stop implementation of the law.

White House Press Secretary Jen Psaki said on Thursday that the Biden administration has put Alabama “on notice” that SB 184 could violate federal law as the administration interprets it. Gov. Ivey responded in a statement to Breitbart that “Alabama will continue protecting our kids and not letting out-of-state liberals like Jen Psaki and the Biden White House tell us what to do.”

“Our state is prepared to defend our values,” she said.

The other bill signed by Ivey, HB 322, requires K-12 students to use bathrooms and locker rooms according to their biological sex. “Here in Alabama, men use the men’s room, and ladies use the ladies’ room – it’s really a no brainer,” the governor said.

Republican lawmakers also amended HB 322 to include a provision that bans classroom discussions about “sexual orientation or gender identity” that are “not age appropriate or developmentally appropriate for students in accordance with state standards.”

Sen. Shelnutt sponsored the amendment, which is styled after legislation signed by Florida Gov. Ron DeSantis last month that restricts discussion of sexuality and gender issues in public schools through third grade.

“We don’t think it’s appropriate to talk about homosexuality and gender identity in schools, they should be learning about math,” said Shelnutt, according to AL.com.

As with the Florida law, Democrats and other critics have attempted to brand HB 322 as a “Don’t Say Gay” bill – a characterization Ivey blasted as “misleading.”

“We are talking about five-year-olds for crying out loud,” she said in her Friday statement. “We need to focus on what matters — core instruction like reading and math.”

“This bill will also ensure our elementary school classrooms remain free from any kind of sex talk,” she added.

Alabama joins a growing list of states taking action against experimental pediatric “gender transitions,” including Arkansas, which approved a blanket ban on transgender drugs and surgeries for minors last year.

An Obama-appointed federal judge temporarily blocked Arkansas’ law in July, but Republican legislators have advanced similar bills across the country in recent months, including in Texas, Idaho, and Mississippi.

The wave of state action comes amid an international reckoning on the effects of transgender procedures on children and adolescents.

Echoing the Swedish guidance, the Alabama Vulnerable Child Protection Act notes that “gender transition” drugs and surgeries are “unproven” and “poorly studied,” with “numerous harmful effects for minors, as well as risks of effects simply unknown due to the new and experimental nature of these interventions.”

Both puberty blockers and cross-sex hormones are linked to extremely serious side effects, including sterilization, the law adds: “Among the known harms from puberty blockers is diminished bone density; the full effect of puberty blockers on brain development and cognition are yet unknown, though reason for concern is now present.”

“With the administration of cross-sex hormones comes increased risks of cardiovascular disease, thromboembolic stroke, asthma, COPD, and cancer,” it continues. Cardiovascular diseases, including “sudden cardiac death,” are also associated with multiple types of puberty blockers, like Lupron and Vantas.

Moreover, the FDA has not approved any hormone drugs for “gender nonconforming children,” the Alabama law points out. Neither puberty blockers nor cross-sex hormones have been subjected to randomized controlled trials or longitudinal studies in gender-confused minors, either.

Studies do show, however, that as few as two percent of boys and 10 percent of girls with gender dysphoria suffer from the condition after puberty, according to the American Psychiatric Association’s Diagnostic and Statistical Manual of Mental Disorders.