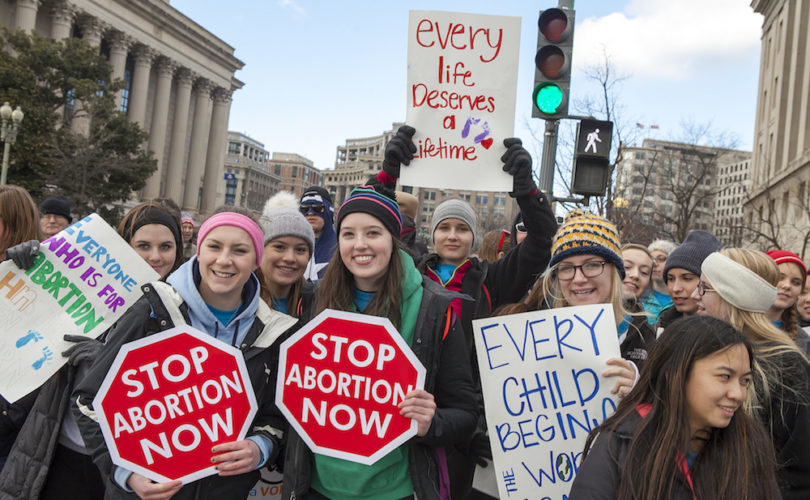 MONTGOMERY, Alabama, May 5, 2016 (LifeSiteNews) – The Alabama House of Representatives passed two bills Wednesday that would substantially curb abortion in the state. One would ban dismemberment abortions, and the other restricts abortion providers from operating within 2,000 feet of a public elementary or middle school.

Should the latter bill, called SB 205, be signed into law, Huntsville’s Alabama Women’s Center for Reproductive Alternatives, currently the only abortion center in north Alabama, would have to close or move.

Debate on SB 205 lasted into the night, with Democrats opposing the measure breaking into the song “We shall overcome” around 9:45 p.m., TimesDaily.com reports.

“You are not here to put your beliefs on other people and that is all that y’all have done,” Democrat Representative Mary Moore told the bill’s House sponsor, getting emotional at the podium while criticizing the bill and GOP lawmakers. “I can’t understand that level of intolerance.”

Republican Speaker Mike Hubbard summoned security when the lawmakers refused to stop singing, but no one was removed, though Moore began shouting when another GOP legislator reportedly approached the group to praise their singing.

“We not here to entertain you,” Moore later said.

The Huntsville abortion center is located across the street from Edward H. White Middle School. It had moved there in 2014 after having to vacate another Huntsville site to be in compliance with the 2013 “Women’s Health and Safety Act” strengthening abortion facility’s standards of care.

The bill’s House sponsor, Representative Ed Henry, had explained the law’s rationale, saying, “I personally don’t feel like these type of facilities need to be anywhere near our children.”

Henry had said too that it was not his intention to limit the number of Alabama’s number abortion facilities, rather that the abortion centers shouldn’t be across the street from a school “because they do tend to cause a certain amount of commotion on a regular basis.”
Democrat Representative Laura Hall’s response was that a business shouldn’t be punished because of protestors outside of it.

SB363, the “Unborn Child Protection Act,” passed the House Wednesday as well, outlawing dismemberment abortions, formerly known as dilation and evacuation, or “D&E” abortions, “unless necessary to prevent serious health risk to the mother of the unborn child.”

With the procedure accounting for most second trimester abortions, the law’s effect would be significant.

“This will basically outlaw all 2nd trimester abortions as 96 percent of these abortions are dismemberment procedures where the arms and legs are literally ripped off of the baby,” said Republican State Representative Mack Butler, the legislator carrying the bill in the House. “This is a barbaric procedure and I am proud to have had a hand in stopping this evil. We must defend the defenseless and Celebrate Life.”

“Both houses have passed the dismemberment bill to stop abortions by butchering the baby,” Republican State Auditor Jim Zeigler said. “Goes to Gov for signature or veto.”

Ciamarra said as well that the Alabama Baptist Convention and both of Birmingham’s area bishops, Bishop Emeritus David Foley and Bishop Robert Baker, endorsed the measure.

“The Unborn Child Protection from Dismemberment Abortion Act would effectively prohibit the most common form of abortion — abortion by dismemberment — in Alabama and be another step toward protecting the lives of unborn children,” the Baptist Convention had said, urging the state’s lawmakers “to seek effective ways to protect the lives of the unborn through these and other legislative actions.”

Both SB 205 and SB 363 are headed now to Alabama Governor Robert Bentley’s desk.