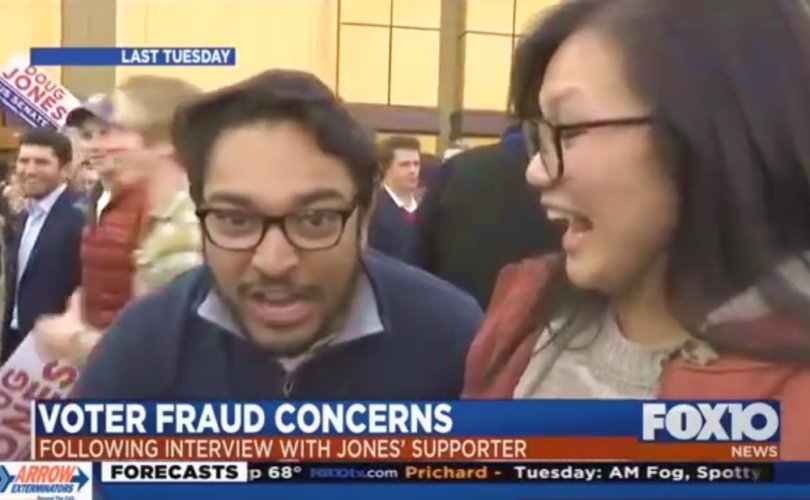 HUNTSVILLE, Alabama, December 21, 2017 (LifeSiteNews) – Alabama's Secretary of State has launched an investigation into voter fraud after a TV interview surfaced in which an out-of-state man admits voting in the state's special election last week that resulted in a narrow Democrat win. Republican Roy Moore is still fundraising and has yet to concede defeat.

“We came here all the way from different parts of the country as part of our fellowship, and all of us pitched in to vote and canvas together, and we got our boy elected!”

Supporters on both sides admit the young man may have simply misspoken, but the election was so extremely close that Alabama Secretary of State John Merrill is looking into who the Jones supporter was and what he meant by saying he and others came from “different parts of the country…to vote.”

“It’s disconcerting when someone who’s not from Alabama says that they participated in our election, so now it’s incumbent upon us to try to identify this young man, to see what kind of role he played,” Secretary Merrill said.  “If it was simply to play a canvassing role –if he was part of a process that went out and tried to register voters– or if he himself actually became a registered voter.”

Merrill reassured voters that he has no concrete evidence of fraud, but with Jones winning by such a razor thin margin, an investigation is in order.  “When you have someone actually recorded on television saying that they voted, and then that’s what he said, then we’ve got to get to the bottom of that,” he said.

Local FOX affiliate WALA reports that the Jones campaign could not identify the exuberant young man in the election night video, and could not even come up with a list of their own volunteers because they “do not have access to the countless groups who volunteered to help canvas and campaign.”

The state investigation is sustaining social conservatives’ hopes that the election, in which controversial Judge Roy Moore was unexpectedly defeated after a vicious liberal smear campaign, may be recounted.

When asked if cases of voter fraud have been reported, Merrill replied, “Yes. We’ve gotten several claims.  But we get claims every election.”

Meanwhile, there have been accusations of election “irregularities” and mismanagement. Media outlet Slate accuses Merrill of “refus(ing) to prepare for high turnout, leading to confusion and long lines.”  The liberal website, which openly opposed Moore, also accuses poll workers of spreading “misinformation” and of denying some voters a ballot.

Voter fraud is not only hard to prove, but hard to commit in Alabama.  A new voter I.D. law —fiercely criticized by Jones’ supporters— requires that every voter show at least one of ten accepted forms of identification.  Merrill assured the public, “We have one of the most stringent voting laws in the nation.”

Nevertheless, Moore is asking folks to contribute to an “election integrity fund” to continue investigating reported voter fraud. The race is on, however, because Secretary Merrill has promised to certify the election the week after Christmas.

Moore is hoping that uncounted military and provisional ballots will bring the tally closer. Newsweek reported that “The special election is still awaiting ballots from absentee voters and members of the military.”

The official results gave Jones only 20,634 votes more than Moore –less than 1.5 percentage points.  The law says a recount must be made and paid for by the government if the difference between candidates was .5 percentage points or less.  Merrill says Moore could request a recount, but would have to pay for it himself.

Significantly, the unusually large number of write-in votes (22,814) was more than the entire difference between the candidates. That means that by law, all those write-in votes must now be identified and documented. Therefore Merrill is requiring all Alabama counties (67) to account for their write-in votes.

Jones will not be seated in the Senate until the election results are certified by Secretary Merrill.

Moore continues to claim a coordinated, false slander campaign cost him the election. “This election was tainted by over $50 million from outside groups who want to retain power and (promote) their corrupt ideology,” he said in a post-campaign video.  He tweeted alleged confirmation of his claim:

Moore spoke directly to supporters in a video released Friday. “We are indeed in a struggle to preserve our republic, our civilization, and our religion, and to set free a suffering humanity,” Moore said.  “I believe the heart and soul of our country is at stake.”