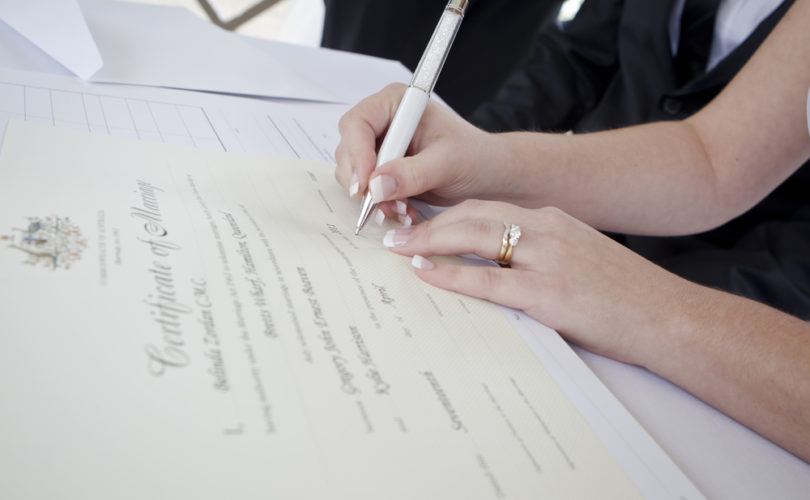 The bill's author, State Senator Greg Albritton (R), told The New York Times that some judges had threatened to go to jail before performing gay weddings.  Last year, Kentucky clerk Kim Davis refused to sign homosexual licenses, and spent a week in jail before being released.  “Kentucky is a precursor to where we are headed,” Albritton said.

“A lot of controversy over who should and who could [get married].  The religious liberty comes to play there,” Albritton explained.  “This bill removes that simply because it’s not statutory to have a ceremony.”

Colonel John A. Eidsmoe, Senior Counsel for the Foundation for Moral Law (FML), an Alabama conservative group, told LifeSiteNews that his organization agrees with the bill's intent.  “I see no reason the State needs to be in the business of issuing marriage licenses,” Eidsmoe said.

“A license is a grant of permission, and we do not need the State's 'permission' to exercise a God-given right such as the right to marry,” the Colonel added.

The FML attorney had two reservations, however.  Eidsmoe pointed out that the bill says, “Two persons desiring to unite in marriage may do so by submitting the forms.”  Eidsmoe explained, “This implies that people do not become married until they submit these documents to the State.  Wrong!  When a man and a woman stand before God in a wedding ceremony and say 'I do' and are pronounced 'man and wife' by the pastor, they are at that moment married.  By accepting the paperwork, the State simply acknowledges what is already an established fact.”

Eidsmoe said a second serious objection to the bill is regarding the recognition of out-of-state marriages.  The bill says a judge shall accept for recording a marriage certificate of an out-of-state marriage, and that recording shall be “prima facie evidence” of the validity of the marriage.  “This requires the probate judge to commit an act (recording) that establishes the validity of a marriage that said judge may believe is invalid,” Eidsmoe explained.

Colonel Eidsmoe, a former Mississippi State Guard, concluded, “Senator Albritton's bill is a step in the right direction, and with a few changes it could go a long way toward solving the moral dilemma of those who sincerely oppose same-sex marriage.”

There are differing opinions even among pro-marriage and pro-family advocates regarding governmental involvement in the recognition and/or sanctioning of marriage.

Even before the Supreme Court’s Obergefell decision constitutionalizing homosexual “marriage,” Rev. Patrick Henry Reardon of Chicago’s All Saints Church announced that he had ceased “acting as an agent for the State of Illinois” by no longer signing marriage licenses.

Fr. Reardon still performed weddings, but he refused to participate in the circus of confusion created by his state regarding marriage, reasoning that by signing state marriage licenses, he was representing the state’s definition of marriage.  “I will not render unto Caesar that which belongs to God,” the priest explained.

Fr. Reardon admits his stand complicates things for couples.  “If you want the tax advantages of marriage recognized by the state, you're going to have to do something else about it, like go down to a justice of the peace,” he told the Chicago Tribune.

Many Christians felt the same way, that the state not only can’t define marriage, but that the civic authorities should be out of the marriage authorization business entirely.  The Chicago Tribune reported that similar decisions by Christian clergy could lead the nation to a different model of marriage, “one that no longer deputizes clergy to sign marriage licenses.”

Jones explains that dropping the marriage license requirement means churches that perform homosexual weddings “can sacralize a same-sex union and we don't need the state to legalize it.”  It also means, according to Jones, that conservative clergy can maintain “a different standard.”

Rev. Johannes Jacobse of the American Orthodox Institute, on the other hand, argues that the government should recognize and encourage natural marriage.  First, he explains that marriage is not dependent on the state.  “Marriage is not a creation of the state. Marriage preexists the rise of the state. So when the state recognizes marriage it merely legally ratifies that which already exists.”

However, the founder of Orthodoxy Today says that while marriage is not dependent or definable by government, nevertheless a key element toward the common good is for government to recognize marriage and the family.  “This ratification is important and necessary… [because] the stability of any society depends on the strength of its families,” Fr. Jacobse told LifeSiteNews.  “The state then has an interest in stable families and the laws should reflect it.”

According to Jacobse, governmental recognition of same-sex couplings as “marriage” is not only untrue, but also not toward the common good.  “When the state decrees two men or two women can be married, it has created a legal fiction — a coupling incapable of creating a baby… The biology is important. And it is also important that the laws reflect biological reality and not an egalitarian ethic that mutes the responsibility parents have toward their child.”

“The same-sex couplings masquerading as marriage is the natural outgrowth of weakened family structures that began with easy divorce,” Fr. Jacobse concluded.  “If the state is confused about biology and elevates the egalitarian ideas as preeminent, then we are farther along the road of decline and fragmentation then we realize.”

The Alabama bill now moves to the state House for review and approval.