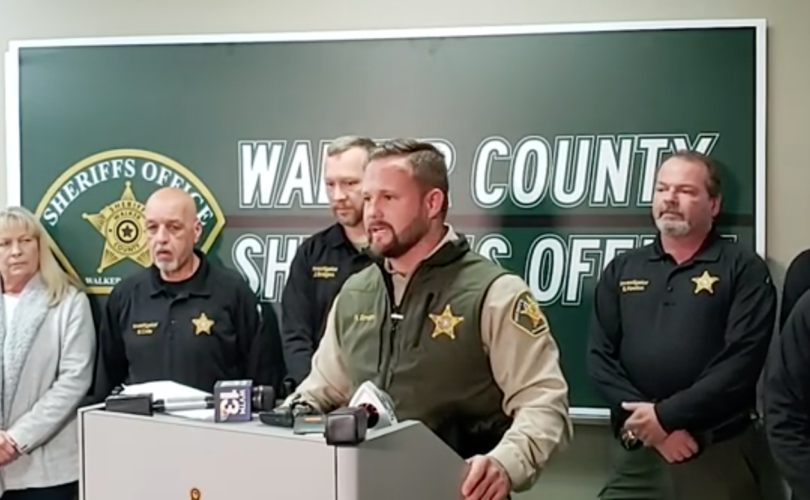 UPDATE, December 10, 2019: This report has been updated to replace an erroneous header image and add further commentary from T.J. Armstrong.

JASPER, Alabama, December 9, 2019 (LifeSiteNews) – A sheriff’s department in an Alabama town says it “won’t bow” to a left-wing organization’s demands that it stop encouraging prayer in response to tragedies on social media.

Like many public officials across the country, the Walker County Sheriff’s Office commonly invokes references to non-sectarian prayer in public comments about the loss of life, from simply stating “our prayers are with” an affected family to asking the community to “fall to our knees and pray fervently for mercy and peace.”

This caught the attention of the Freedom From Religion Foundation (FFRF), an organization dedicated to challenging benign expressions of religiosity at every level of government. On November 26, the group wrote a letter to Sheriff Nick Smith to “encourage your Office to use more inclusive language when posting on social media.”

“It is laudable for your Office to support those in mourning and to facilitate community recognition for those who have lost their lives serving the public,’” FFRF attorney Sam Grover wrote. “However, a senseless and tragic death is not an excuse to disregard the Constitution, which prohibits government entities like the Sheriff’s Office from promoting religious activity.”

“We consider it a great honor to be considered and to have received a wonderful letter from the ‘Freedom From Religion’ organization,” Sheriff’s Office community relations officer T.J. Armstrong responded. “Proud to have a Sheriff that won’t bow to political pressure or the devices of the enemy!”

Armstrong went on to cite Chief Deputy Anthony Leach’s invocation of Matthew 16:23: “Jesus turned and said to Peter, “Get behind me, Satan! You are a stumbling block to me; you do not have in mind the concerns of God, but merely human concerns.”

In additional comments to CBS 42, Armstrong (who is also a minister) said the department doesn’t “push one religion over another,” and that he believes “when we ask people to pray, people see our hearts and they see that compassion and they respond to that.” He also dismissed the idea that FFRF was sincerely offended, and instead suggested “these people are just looking for a fight.”

“Based on all of these basic fundamentals of Christianity, it would be senseless for ANYONE to attempt to force Christian beliefs as the letter from the Freedom from Religion Foundation implies because it just won’t work,” Armstrong elaborated in another Facebook post. “That’s exactly why as Christians we are called to go into the world and preach the Gospel, not just to keep our beliefs inside the walls of a designated church building and edify each other in some inclusive fraternity, but to demonstrate the Love and Grace of Jesus Christ through our actions so that they can have eternal life.”

Contrary to contemporary misconception, the First Amendment to the U.S. Constitution was never intended to purge religious statements or ideas from the public sphere.

“The purpose behind the Establishment Clause was not to create ‘a wall of separation between church and state.’ (As the Sixth Circuit Court of Appeals once noted, ‘this extra-constitutional construct has grown tiresome.’),” the American Center for Law and Justice (ACLJ) has previously explained. “The very same Congress (specifically, the First Congress) that approved the language of the Establishment Clause also provided for the appointment of chaplains in the U.S. Senate and House of Representatives.

“In fact, on the very same day that it approved the Establishment Clause, the First Congress also passed the Northwest Ordinance,” the ACLJ continues, “providing for a territorial government for lands northwest of the Ohio River, which declared: ‘Religion, morality, and knowledge, being necessary to good government and the happiness of mankind, schools and the means of education shall forever be encouraged.’”