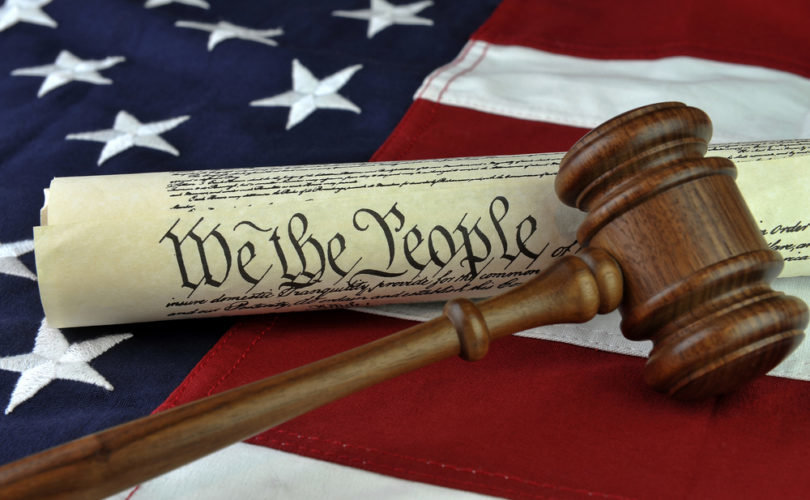 MONTGOMERY, AL, March 5, 2015 (LifeSiteNews.com) — Alabama’s high court has upheld the state’s definition of marriage and ordered a halt to marriage licenses for homosexual couples in the state, while also criticizing its federal counterpart for striking down DOMA.

The Alabama Supreme Court ruled Tuesday that “nothing in the United States Constitution alters or overrides” state judges’ duty to administer state law.

The all-Republican court also said the federal district court had employed a “judicial sleight of hand” in “conferring fundamental-right status upon a concept of marriage divorced from its traditional understanding.”

The ruling is significant in making Alabama the first state to directly resist federal imposition of marriage redefinition, with a great majority of the states having had their legal definition of marriage overturned by judicial order.

“The ruling by the Alabama Supreme Court is historic, and is one of the most researched and well-reasoned opinions on marriage to be issued by any court in the country,” said Mat Staver, Founder and Chairman of Liberty Counsel.

Staver praised the order for upholding state’s rights and for resisting judicial tyranny.

“The legitimacy of the judiciary is undermined when a judge legislates from the bench or usurps the power reserved to the states regarding natural marriage,” he said. “This decision of the Alabama Supreme Court is very well reasoned, which is quite rare from today’s courts. The decision not only affirms natural marriage but also restores the rule of law.”

U.S. District Judge Callie Granade had struck down a constitutional amendment and an Alabama state law defining marriage as a union between one man and one woman in a January 23 decision, saying the laws violate homosexuals’ due process and equal protection rights according to the U.S. Constitution. The ruling was on hold until the state’s appeal to the 11th Circuit.

Alabama’s Chief Justice Roy Moore contested the judicial action to redefine marriage. He told the state’s probate judges not to issue marriage licenses to homosexual couples as it would violate state law. He also urged Alabama Gov. Robert Bentley in a January 27 letter to fight the federal decision.

Moore wrote to all 50 of the nation’s governors in 2014 urging them to preserve marriage in the U.S. Constitution with an amendment. He was not part of the March 3 Alabama State Supreme Court ruling, and his absence was not explained, according to the SCOTUS blog.

The U.S. Supreme Court declined an application February 9 by the State of Alabama to stay the decision striking down the state's constitutional amendment and state law defining marriage as a union between one man and one woman, pending its ruling on whether the U.S. Constitution guarantees a right to same-sex “marriage,” expected by the end of June.

The seven-to-one majority decision by the Alabama high court rebutted every argument made for same-sex “marriage” as a constitutional matter, the SCOTUS blog said, and “lambasted the Supreme Court for making a ‘moral judgment, not a legal judgment’ when it struck down the federal Defense of Marriage Act in United States v. Windsor in June 2013.”

The order to stop issuance of marriage licenses to homosexual couples extends to all sixty-eight Alabama probate judges, some of whom have been issuing such licenses after the district federal judge’s ruling. Most of the state judges, those not not named directly in the case, were given five days from Tuesday to answer the challenge and argue why they should not have to observe the statewide order against licenses for homosexual “marriages.”

The SCOTUS blog said that because the state court’s ruling is an interpretation of the federal Constitution, it is likely subject to direct appeal to the Supreme Court, if any state judge wanted to take it there. What’s not clear, it said, is whether same-sex couples could appeal it because they were not parties in the case, but the couples could probably bring a new lawsuit against any state probate judge who refused them a license in accord with the order.

“I applaud the Alabama Justices in their wise decision respecting the freedom of Alabama's voters to uphold natural marriage,” Family Research Council President Tony Perkins said in a statement. “In a refreshing change, Alabama's Supreme Court is using the law to determine their actions — not a politically motivated opinion of a lower court federal judge.”

He pointed to recent polling that found sixty-one percent of Americans oppose the U.S. Supreme Court forcing marriage redefinition on all 50 states.

“If Americans were truly on board with this effort to redefine marriage, governors, state attorneys general, and other elected officials wouldn't bother fighting it.” Perkins said. “Instead, the Alabama Supreme Court reflects where the American people really are on the issue –and it is respecting the freedom of the voters to uphold natural marriage.”