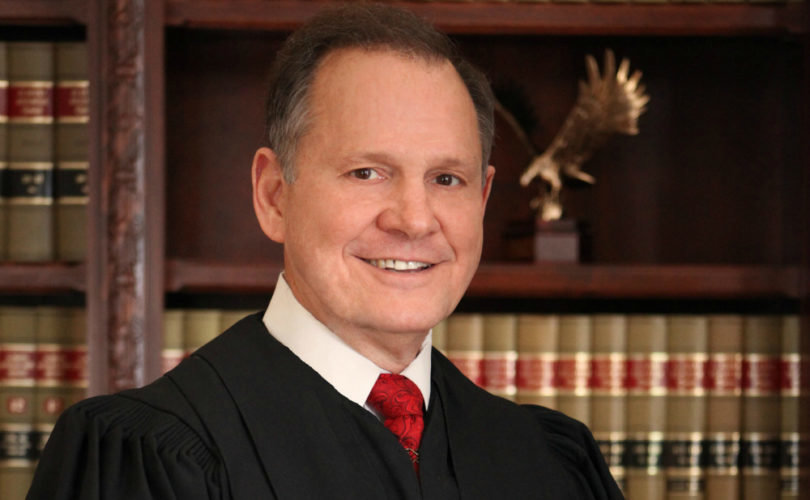 MONTGOMERY, Alabama, August 4, 2016 (LifeSiteNews) — Despite a concerted effort to oust Alabama’s chief justice for defending natural marriage, a majority of the state’s Republicans still support him, even as their choice for governor in the next election.

Chief Justice Roy Moore had a 58 percent favorable rating in a survey of 600 likely Republican primary voters, Yellow Hammer News reports, a significantly higher number than any of the other potential candidates.

Moore’s unfavorable rating was 29 percent, with another 11 percent saying they had no opinion and 2 percent having not heard of him.

Moore also surpassed the other potential 2018 Republican primary candidates as their choice for governor, with 28 percent saying they would vote for him. Twenty-four percent of Alabama Republicans were undecided, but the next closest contender was Attorney General Luther Strange at 19 percent.

Moore has been a vocal supporter of marriage and Alabama’s marriage protection laws, the state's 1998 Defense of Marriage Act and the 2006 state constitutional amendment defining marriage, which were approved by a substantial majority (81.2 percent) of Alabama residents and have been the subject of ongoing litigation.

Then despite the Obergefell ruling on Jan. 6 of this year, Moore issued an administrative order to Alabama’s probate judges to “not to issue any marriage license contrary to the Alabama Sanctity of Marriage Amendment or the Alabama Marriage Protection Act.”

Moore said probate judges have a ministerial duty not to issue marriage licenses in conflict with the state marriage amendment pending a decision from the Alabama Supreme Court on the effects of Obergefell.

The move drew criticism from same-sex “marriage” supporters, even a rebuke from President Obama, a proponent of homosexual “marriage.”

A group of leftist organizations and individuals attempted to oust Moore earlier this year by filing complaints with the Alabama Judicial Inquiry Commission against him, alleging ethical misconduct for urging state probate judges to uphold Alabama’s marriage laws instead of the federal court ruling striking them down.

Moore countered the group’s allegations, saying their complaints were not about him having done anything wrong or about ethics.

“This is about marriage,” he stated. “There’s nothing in writing that you will find that I told anybody to disobey a federal court order.”

Moore was temporarily suspended in May after the complaints.

Most of the state’s probate judges ignored Moore’s directive and have issued same-sex “marriage” licenses regardless.

Even though the state Supreme Court had issued a 170-page ruling rejecting the Obergefell decision in March, a federal judge issued a permanent injunction in June against enforcing Alabama's marriage protection law. The ruling was questioned by marriage advocates, who say a federal judge has no authority over the Alabama Supreme Court.

Moore did not fare quite as well in the poll of Alabama Republicans when it came to primary voters naming their second choice should their first choice not make the runoff. Ten percent said they would vote for him, behind Strange at 23 percent and 31 percent undecided.

This suggests Moore could have difficulty reaching the 50 percent+1 threshold necessary to get the Republican nomination. The report went on to say, however, that this also mirrors what Moore faced in his last bid for election as chief justice and he still prevailed.