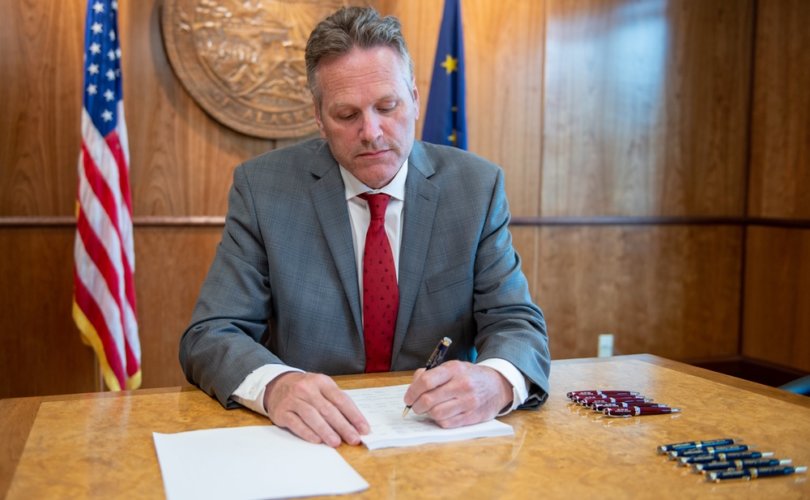 ALASKA, July 1, 2019 (LifeSiteNews) – Alaska Gov. Mike Dunleavy has a message for the state’s Supreme Court: If you’re going to force taxpayers to fund abortions, that money is coming out of your budget.

The Alaska Supreme Court has continually ruled that the state must fund abortions, so Dunleavy slashed the amount it has been spending on the deadly practice from the state judiciary’s budget.

Via a line-item veto, Dunleavy reduced the budget of the state’s courts by $334,700 – the amount of public money spent on elective abortions annually.

“The Alaska Supreme Court has a long history of extremist rulings on abortion,” Alaska Family Action (AFA), a division of the Alaska Family Council, posted on Facebook when Dunleavy finalized the budget. “But until today, they never suffered any real consequences for it. Now they will start feeling the pain of their own arrogance. Every dollar the state spends on killing unborn children will be cut from their budget.”

“Ultimately, our goal must be to ensure that no agency of state government is paying even one cent to destroy life,” AFA continued. “The best way to accomplish this permanently is to amend our constitution to make it abundantly clear there is no right in the state constitution for abortion, or abortion funding.”

“But while we work on that long-term goal, Governor Dunleavy deserves credit for calling out the court on their radical record. In defiance of the constitution, liberal justices have pretended they have the power to appropriate money, even though appropriation power is expressly reserved to the Legislature. Now they will deal with the consequences of exceeding their authority. As we read in the book of Proverbs (16:18), ‘Pride goes before destruction, and a haughty spirit before a fall.’”

There is no legal limit on late-term abortion in Alaska.