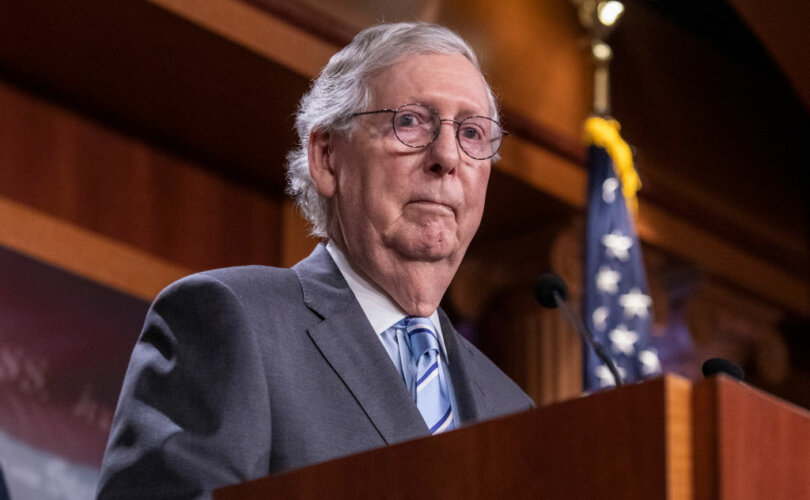 (LifeSiteNews) – The Republicans of Alaska’s 9th Congressional District condemned the Republican U.S. Senate leader, Mitch McConnell of Kentucky, for spending on behalf of Alaska’s liberal incumbent Republican, Sen. Lisa Murkowski, instead of supporting her more conservative challenger, Kelly Tshibaka, who has the backing of the Alaska GOP.

But despite Murkowski’s repeated opposition to GOP priorities as well as a core moral plank of the official Republican platform, McConnell has long declared himself “proud she’s in the Republican conference.” In the current race, he’s spent several million dollars backing her over Tshibaka via his Senate Leadership Fund PAC.

“In September, McConnell’s PAC reinjected money into the Alaska Senate contest after initially canceling $1.7 million alongside $8 million stripped from Republican Arizona Senate nominee Blake Masters,” The Federalist’s Tristan Justice writes. “McConnell later pulled another $10 million from the Arizona race, leaving the Republican candidate abandoned by the primary super PAC charged with reclaiming the upper chamber. Both Masters and Tshibaka have pledged not to support McConnell for another term in GOP leadership.”

A longtime fixture of the Republican establishment, McConnell has been credited with helping confirm Trump’s many judicial nominees (who overturned Roe v. Wade but have been mixed on other issues), but has also worked against the concerns of the party’s conservative grassroots on issues including marriage, gun rights, COVID-19, spending, healthcare, and GOP primaries.

“If you want to trash-talk our candidates to help the Democrats, pipe down. That’s not what leaders do,” Sen. Rick Scott of Florida, the chair of the National Republican Senatorial Committee (NRSC), said last month in comments widely recognized as directed at McConnell. “And Republicans need to be leaders that build up the team and do everything they can to get the entire team over the finish line.”

“Ultimately, though, when you complain and lament that we have ‘bad candidates,’ what you are really saying is that you have contempt for the voters who chose them,” Scott continued. “Now we are at the heart of the matter. Much of Washington’s chattering class disrespects and secretly (or not so secretly) loathes Republican voters. These self-appointed ‘smart guys’ in Washington think they (not the voters) should be able to choose our candidates. The D.C. crowd should not choose candidates, and they do not, and they will not.”