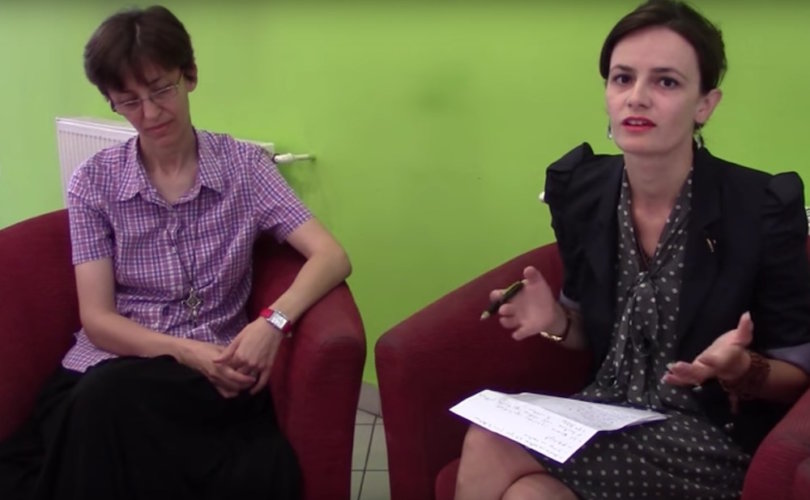 They prayed the Rosary behind closed curtains and secretly celebrated Easter and Christmas, burying or burning the Easter eggs that would give them away, while Enver Hoxha, the paranoid dictator who ruled from 1944 until his death in 1985, carried out a brutal religious persecution that intensified in 1967 when he declared Albania the world’s first officially atheist country.

Now Albanian Catholics are seeking to build a culture of life in this small country, roughly the size of Belgium with a population of just under three million, because three years after the fall of Communism, abortion was legalized in 1995.

“Albania is a land of martyrs, and we know that we have hope because they have built before us,” pro-life activist Maria Katerina (Klimete) Klenja observed.

“We are here today because they gave their life for Christ.”

Klenja, Dr. Majlinda Gjoni, and Zina Bobnaj, who are spearheading the pro-life mission in their country, spoke to Dr. Thomas Ward of the UK-based National Association of Catholic Families at July’s March for Life in Hungary. (Watch Dr. Ward's interview with the Albanian pro-life leaders here.)

Albanian martyrs to be beatified

The Vatican recently announced it will beatify 38 martyrs on November 5, 2016, in Shkodër, a city in northwestern Albania — two months after Albanian-born Blessed Mother Teresa of Calcutta is canonized on September 4 in Rome.

The martyrs are Archbishop Nikollë Vinçenc Prennushi and his 37 companions, which include another bishop, Frano Gjini, as well as 31 priests, one seminarian, three laymen (one married), and one woman, Maria Tuci, a religious postulant.

These martyrs are being beatified because “they defended their faith, they did not deny Christ, they did not deny the Church … and they are a big witness to us,” noted Klenja, who with Bobnaj is a consecrated member of the charismatic lay community Tempulli i Zotit, Temple of God.

Tortured and killed for their faith

The religious persecution began when the Communists, under Hoxha, took over in 1944, after the occupying Nazis were ousted.

When Hoxha declared Albania officially atheist in 1967, all places of worship, including 157 Catholic churches, were closed — either destroyed or turned into storage barns, basketball courts or cinemas.

Almost 2,100 Albanians were tortured and murdered because of their faith during these years, according to Catholic News Service, including nearly every Catholic priest.

“Of the 135 clergy in Albania, 131 of them went through the process of martyrdom,” Gjoni told LifeSiteNews in an email, citing statistics from the archives of the Archdiocese of Shkodër-Pulit, which concluded: “We must state, without fear, that they were the most persecuted clergy in history.”

Of these, “31 clerics were killed by firing squad; eight died as a result of torture; three were killed without trial or court decision; 23 died while in prison, in an internment camp, or as a result of being tortured while there; 66 left prison barely alive,” Gjoni wrote.

Indeed, by all accounts, the torture was unbelievably horrific.

Priest and poet Lazer Shantoja, the first known martyr, was shot on March 5, 1945, and his body dumped in an unmarked grave. He had had the bones in his legs and forearms broken, and “he ‘walked’ by supporting himself on his elbows and knees,” reported the Weekly Standard’s Stephen Schwartz.

Gjoni related to Ward how the guards sawed off the legs of another priest, and brought in his mother to witness his suffering, who begged them to kill her son to end his pain. Yet another priest, she said, was murdered by being drowned in a toilet.

The sole woman among those to be beatified, 22-year old Maria Tuci, a postulant with the Stigmatine Sisters of Shkodër at the time of her arrest, was tortured, humiliated because of her religious vocation, and violated, Gjoni said.

After a guard threatened that he would “reduce you to a state that even your family members would not be able to recognize you,” Tuci was tied in a sack with a wild street cat, which was beaten by the guards so that it viciously bit and clawed the young woman, wrote Ines Murzaku in Crux.

She never cried out from the pain, but prayed for her persecutors, Gjoni said.

After days of torture, and with her untreated deep wounds now fatally infected, Tuci was sent to hospital — as the guard had promised — unrecognizably disfigured by swelling and festering blisters.

She died in physical agony October 24, 1950, holding a rosary, and said: “I thank God because he gave me the force to die free,” wrote Murzaku, adding: “She forgave her tormentors and the prison guards.”

When Hoxha came to power, he first targeted the Jesuits and Franciscans because he “had fear of their education,” Gjoni told LifeSiteNews. “During the dictatorship, many other sisters and priests were killed, but there are no precise statistics because no documents or dates survive.”

However, “if one added up the aggregate number of years the Albanian clergy spent in prison, it would be 881 years, almost nine centuries!”

Gjoni noted that Franciscan priest Fr. Zef Pllumi recounted the decades of terror in his memoir: Live to tell: a true story of religious persecution in Albania.

“It doesn’t just tell the story of his life but also the story of many Albanians,” Gjoni wrote. “Fr. Zef’s Franciscan Superior, Fr. Marin Sirdani, told him to tell people about what had happened to the church, and he fulfilled his duty in writing this book.”

Another account by American émigré Albanian Catholic Gjon Ssinishta, The Fulfilled Promise, 1976, is quoted by the Weekly Standard’s Schwartz, who pointed out that Hoxha was “enraged particularly” with Catholics, who were a majority around Shkodër, where they had resisted his bid for power with armed force.

Albania is predominantly Muslim, who account for about 60 percent of the population according to a 2011 census, with Catholics at 10 percent and Orthodox at seven. Fourteen percent were “undeclared.”

“All Communist regimes repressed religion,” Schwartz said. “But the ferocity of Hoxha and his minions in dealing with the Albanian Christian clergy, who represented a minority, appears unique … it is clear that the Albanian Communists saw the Christians as difficult to break.”

Moreover, the “Catholic clergy were close to the people and honored as protectors of local traditions,” Schwartz wrote. “Since they would not accommodate the demands of the new rulers, they must be deprived of life and removed from memory, except as a caution to others.”

But Albanian Catholics kept the faith alive, as Gjoni related.

Through it all, “there have been many Catholic families who practiced the faith hiding away, in secret,” Gjoni said. “We pray the Rosary during the time of Lent for seven weeks … but in a quiet way, close the window. … We tell the children, don’t tell these things because if you tell, we’ll go to prison.”

Ward, who described Albania as “the bleeding heart of Europe, and because of its suffering, the heart of the Church in Europe,” noted in an email to LifeSiteNews that Albania’s “story is highly relevant to what may well happen to our families in many Western countries.”

“I would stress the importance of the survival of Catholic families in the light of an almost total elimination of priests,” he wrote. “What is so very impressive is the holiness of these young ladies and the evil of their political background.”

Struggle now is to protect life and family

The three women “are putting into effect the Gospel of Life, they are working to prevent abortion,” noted Ward, a corresponding member of the Pontifical Academy for Life. “I would like to appeal to the pro-life people across the world to come to their assistance.”

In 2012, the Council of Europe reported sex-selection abortion, in particular, was alarmingly on the rise in Albania, with 112 boys born to 100 girls.

Gonji started the pro-life apostolate in 2010 in the capital city of Tirana, where she is director of Caritas for the diocese of Tirana-Durres. The group prays daily for an hour in front of the state hospital where abortions are done, and gives out information on pregnancy help.

“We have also established a Pro Life clinic in Tirana which offers ultrasound, free pregnancy tests and help for mothers who are considering abortion,” she told LifeSiteNews.

Klenja is based in the northern city of Lezha, where she “has opened a pro-life clinic inside of the state hospital which offers abortion. It offers counseling, prayer and support for mothers who want to have their babies,” Gonji said.

Johannes Bucher from Human Life International Austria and Monsignor Phillip Reilly of the Helpers of God's Precious Infants have assisted them in these efforts, she added.

They now hope to hold a pro-life conference in Albania, Klenja told Ward, in order to “get the attention of all those people who have a say on family issues either within the church” or “outside of the church,” and help them “understand how important it is to protect the family now, not only in Albania, but in the entire Europe and in the entire world.”