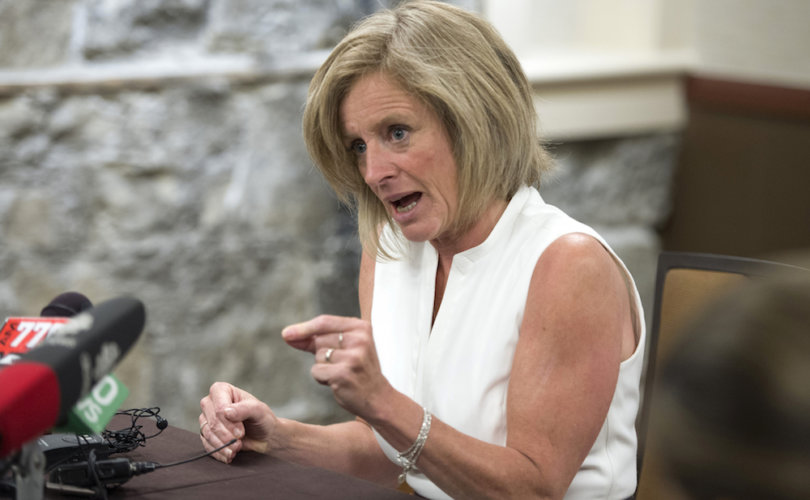 EDMONTON, Alberta, May 31, 2018 (LifeSiteNews) — The Alberta legislature passed a bill Wednesday forbidding pro-life protesters and sidewalk counselors from coming within 50 meters of an abortion facility, under penalty of fines or even prison time.

The so-called Protecting Choice for Women Accessing Health Care Act passed by a 45-1 vote, CBC News reports. Members of the Official Opposition United Conservative Party did not participate in the vote.

The bill will cover both of Alberta’s two standalone abortion facilities, Kensington Clinic in Calgary and Women's Health Options in Edmonton, which account for 75% of the province’s abortions. It also prohibits taking video, photos, or audio recordings of anyone entering or exiting a facility, allows clinics to request that their bubble zone be expanded to 150 meters, and lets abortionists apply for 20-meter zones around their offices and 160-meter zones around their homes.

Violators may be fined $5,000 or jailed for six months upon a first offence, with repeat offences carrying maximum penalties of a $10,000 fine or year in jail. Corporations responsible for violations would have to pay $25,000 for first offences and up to $100,000 for further convictions.

UCP Leader Jason Kenney condemned the bill as a distraction, and said it was unnecessary because staffers with legitimate harassment claims already have injunctions and can simply petition the courts to expand them. Health Minister Sarah Hoffman called existing injunctions insufficient.

“Everything I’ve said about this stands. I think the courts are in a better position to adjudicate the tension between freedom of expression and public safety,” Kenney said Wednesday. “They can try to divide Albertans on hot-button issues, but they’ll be talking to themselves.”

Pro-life activists have also faulted Kenney and the UCP for refusing to fight the law.

“The NDP are not playing games. They are trampling on pro-lifers’ rights whenever they can get away with it, and shame on Kenney for not standing up for basic human rights and freedoms,” Campaign Life Coalition vice president Jeff Gunnarson told LifeSiteNews. He faulted Kenney for “siding with the abortion industry instead of siding with those of us pro-lifers and social conservatives who helped him throughout his career whether through voting, financially contributing to his campaign or volunteering.”