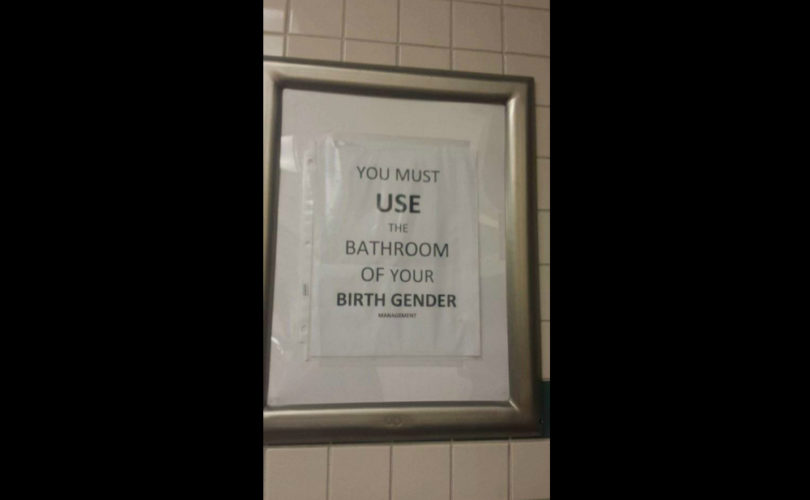 MEDICINE HAT, Alberta, July 28, 2016 (LifeSiteNews) — An Alberta tavern has come under fire for banning men — whether or not they are presenting or transitioning into “women” — from using the women’s bathroom.

But Medicine Hat’s Corona Tavern says it did so because drunken men claiming to be transgendered have been entering the women’s bathroom since Rachel Notley’s NDP government passed its “trans rights” Bill 7.

“This has caused some young female patrons to feel unsafe and threatened,” the bar’s management said in a Tuesday press release.

The Corona was hit by a maelstrom of criticism after 21-year-old Calgarian River Rising — a man who presents as a woman — related on Facebook that while in the small southern Alberta city for a friend’s wedding, he was questioned by the bar’s bouncers and prevented from using the women’s bathroom.

In the ensuing social media firestorm, the bar was further attacked for putting up an allegedly “transphobic” sign on the women’s bathroom door that read: “You must use the bathroom of your birth gender.”

But as Corona’s press release stated, “The clientele that we serve are often under the influence of alcohol and some young men who are not transgendered have been claiming to be, to enter the women’s washroom.”

The bar has received “numerous complaints about males going into the women’s washroom” since Bill 7 passed.

Bill 7, which became law in December 2015, added “gender identity” and “gender expression” as prohibited grounds for discrimination under the Alberta Human Rights Act.

LifeSiteNews contacted the tavern and did not hear back by deadline, but manager Lorraine Schmaltz reiterated to CBC News that “guys wanna be sneaky, so they say they’re transgender, and they’re in the women’s washroom.”

The Corona stressed in its statement that “We have no bias against those who are LGBTQ. … We are saddened by this situation.” Schmaltz told Medicine Hat News the bar moved swiftly to fix the problem, and now has a gender-neutral washroom.

“It’s the way our world is going and there is no legislation on this, unfortunately,” she added. “So we didn’t know what to do and acted wrong. But in the end it’s all rectified.”

The offending sign has also been removed, but sympathy in the media was markedly skewed in favor of the transgendered, with one bar patron, Hatter Destiny Burkart, arguing that inebriated men in the ladies’ room is not reason enough for what she describes as “discrimination.”

“If a man’s gonna do that, he’s gonna do it anyways,” she told the CBC.

But Campaign Life Coalition’s political strategist Jack Fonseca had earlier warned this would happen, pointing to the notorious case of Christopher Hambrook, a serial rapist who, after being released from jail in 2012, accessed a Toronto women’s shelter by claiming to be a trans woman and raped two women.

Moreover, Bill 7 is not only “a threat to the safety of women and girls,” but will harm the very people it purports to protect, Fonseca told LifeSiteNews in an earlier interview, because it “will just encourage them to embrace their confusion rather than get help for it.”

What is known as transgenderism to the mainstream culture is in psychiatry described as the mental illness “gender dysphoria,” which causes an individual to repudiate his or her biological sex.

Calgary’s Rev. Shafer Parker told LifeSiteNews it’s increasingly clear that “it is the duty of every right-thinking citizen to resist the madness that is being imposed upon society by the LGBTQ movement.”

“This is ridiculous. It’s unsustainable and will come crashing down one way or another after people are hurt badly enough,” said Parker, formerly a journalist for the Christian-based Alberta Report and now senior pastor at Hawkwood Baptist Church.

The Corona Tavern imbroglio underscores that “there is no such thing as gender neutrality” and that “to try to say otherwise is to always create a list of problems that are literally irreconcilable.”

He pointed to Paul’s injunction in Romans 12:18: “If it be possible, as much as lieth in you, live peaceably with all men.”

“We don’t need to start unnecessary fights, in the sense that, if it’s as simple as adding a bathroom with a lock on the door, let’s do it,” Parker said.  “But when push comes to shove, we have to be prepared to pay a price, whatever that price may be, rather than bend from the truth.”

“We’re the ones who stand for the truth and the truth is, God made us male and female, and there are no other sub-categories, there just aren’t.”

Added Parker: “And we have to stand for that truth even when it’s costly. In the end, we save the world by doing so.”

Meanwhile, Prime Minister Justin Trudeau’s Liberals introduced the federal Bill C-16 in May 2016, which will change both the Canadian Human Rights Act and the Criminal Code to include the terms “gender identity” and “gender expression.”