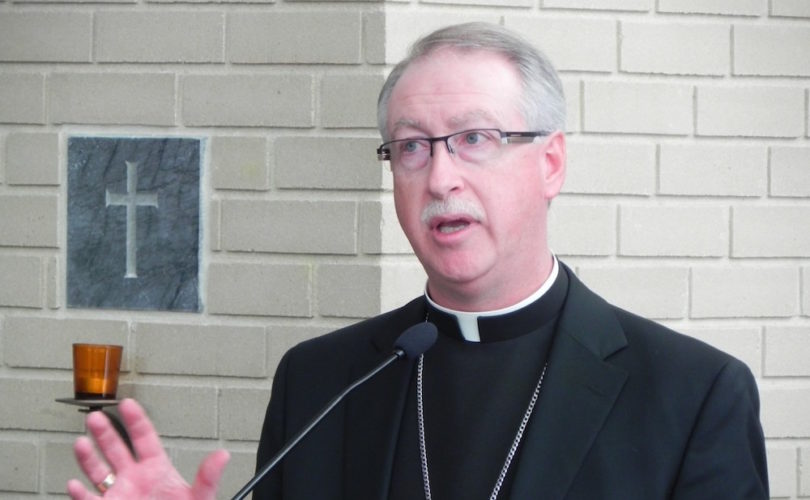 Both sides suggested there could be room for compromise, but said the meeting was not intended to negotiate details, leaving trustees to develop policies in time for the government’s March 31 deadline.

He called the talk “productive” and said it indicated there was “latitude to ensure that the integrity and the protections that religion is allowed both in the province of Alberta and across the country are adhered to.”

“But,” he added, “that protection has never allowed faith-based edicts to compromise the letter of the law.”

The bishops also claimed, however, to have the law on their side, highlighting the Canadian Constitution’s protection of Catholic schools. “Given this opportunity that we've had now for such open and frank dialogue, that gives me a certain confidence right now that we'll find the way forward that respects all, including the stance of the Catholic church on that,” Archbishop Smith said, according to CBC.

Alberta’s Catholic schools are entirely tax-funded, and were established by the same 1905 federal legislation that created the province itself. History records them as a compromise between Catholic and Protestant factions in the federal Parliament, replicating similar dual systems in Ontario and Quebec.

However, a former Alberta education minister and ardent foe of separate schools, David King, argues on his ChangeforGood blog that the Catholic schools could be abolished by a simple act of the provincial legislature, and should be.  He reasons that their very existence “means …favouritism for one denomination,” which, he says, “is also a bias against all other denominations and faiths.”

King complains that it is undemocratic for unelected bishops to issue decrees for  tax-funded schools, but has nothing to say about whether democratically-elected Catholic school trustees have a right to oppose the government’s transgender policies or if parents have a right to determine with whom their children share washrooms and change rooms.

John Carpay of the Calgary-based Justice Centre for Constitutional Freedoms thinks King is wrong about Alberta being able to unilaterally abolish the Catholic schools because they were created by federal law.

However, King counters that Newfoundland and Quebec both abolished their denominational school systems without federal opposition, even though these were embedded in the national constitution.

As well, Carpay cites the recent Supreme Court of Canada ruling in the Loyola v. Quebec case in favour of a private Catholic school that resisted a provincial  policy making all schools teach religion from a secular viewpoint.

“The Supreme Court,” Carpay told LifeSiteNews, “ruled that religious freedom [as a constitutional right] could be exercised in community, and that parents could exercise their rights to raise their children in community too.”

Archbishop Smith, in an earlier statement, laid out the Catholic Church’s opposition to transgenderism, writing “The Catholic belief is that the human person is created ‘body and soul’ together (cf. Catechism of the Catholic Church, nn. 362f.), that God created human beings male and female (Mark 10:6), and that we are all called to care for and respect our bodies as they are created.”

Calgary’s Bishop Henry has been the most outspoken opponent of the guidelines, issuing two stinging public rebukes accusing the government of “totalitarianism” and of a “forceful imposition of a particular narrow-minded anti-Catholic ideology.”

Eggen responded to the bishops’ strong opposition with threats, suggesting, according to CBC, that the government was considering the future of Catholic education in the province. “We're moving down a path here that is very unfortunate and it has very serious implications,” he said.

But his comments after the meeting suggest he is reluctant to pick a fight with the Catholic Church, at least for now, even though “transgender rights” have become the homosexual lobby’s cause du jour.

Adriana LaGrange, president of the Alberta Catholic School Trustees Association, told LifeSiteNews, “We are of one mind” with the bishops, and added that the trustees “very much appreciated their moral and theological direction.”

“We are bound by both canon law and civil law,” she said.

But when asked whether the trustees believed that Canadian law was on their side in following Catholic teaching, she replied, “Yes we do.”

Mrs. LaGrange joined Carpay in citing the Loyola judgement. “It found we do have a right as a Catholic community to uphold our religious rights,” she told LifeSiteNews, adding that that there were other “strong legal precedents,” recognizing the rights of Catholic schools.

But she called any legal conflict “counterproductive,” noting that the Catholic schools had implemented anti-bullying policies and already followed “a moral imperative to look after each student as a unique creation” that made the government’s call for “additional policies for one group” unnecessary.

The Catholic schools educated 160,000 students—one quarter of the total enrolled in the province—and scored among the highest in the province across a range of measures both academic and social, Mrs. LaGrange said.

She noted Alberta law allowed not only public and Catholic schools but also charter schools (which are tax-funded, parent-led alternative schools), private schools (religious and secular) and home schooling. “To have them teaching one ideology of education seems counterproductive.”