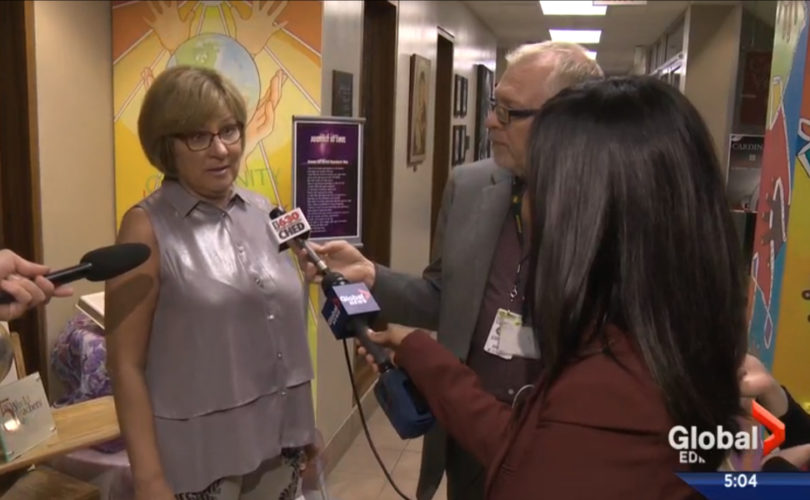 Board chairwoman Debbie Engel speaks to the media about the transgender policy.CTV news video screenshot

EDMONTON, October 2, 2015 (LifeSiteNews) — A Catholic school board in Edmonton is indicating that it will defy its local Archbishop Richard Smith by ignoring his endorsed recommendations for forming policy on accommodating transgendered students while pushing through its own controversial policy spearheaded by LGBTQ activists.

“I’ve had to search my conscience and decide which master I’m going to follow, and it’s the kids. I’ve chosen the kids and it puts me out of communion with the local ecclesial authority,” stated Edmonton Catholic School board trustee Patricia Grell to the Edmonton Journal.

“No one can interfere spiritually with another person … be it teachers who are using contraception and going to communion, we have to respect that’s their decision,” she said.

Grell’s comments are in-tune with those of board chairwoman Debbie Engel who stated, in the same report, that the Archbishop’s endorsed recommendations about policy conflict with how her own personal conscience is telling her to act.

The archbishop’s recommendations are “in no way binding,” Engel stated.

Earlier this week, Grell leaked to media a confidential copy of the Catholic Archdiocese’s recommendations for forming transgender school policy. The leaked document immediately caused outrage from LGBTQ activists since it correctly states Catholic teaching on so-called “gender transition,” calling it “contrary to the teachings of the Catholic Church.”

Kristopher Wells, a director with the Institute for Sexual Minority Studies and Services at the University of Alberta, called the document a “transphobic policy [that] unelected bishops want to force on all publicly-funded Catholic schools.”

The leaked document, developed by the Archdiocese via the Council of Catholic School Superintendents of Alberta (CCSSA), provides what it calls “background information” about Catholic teaching on gender, as well as “considerations for schools, when supporting and guiding students with respect to gender identity and expression.”

“The Catholic Church teaches that the body and soul are so united that one's gender identity is rooted in one's biological identity as male and female. In Catholic teaching, one’s sexual identity is considered ‘a reality deeply inscribed in man and woman,’” the document states.

“It is the conviction of the Catholic Church that genetically, anatomically and chromosomally, the body reveals the divine plan, and that humans are ‘obliged to regard [their bodies] as good and to hold [them] in honour since God has created [them].’ Therefore, to attempt ‘gender transitioning’ is contrary to the teachings of the Catholic Church,” the document continues.

The document makes it clear that students who experience what it calls “gender dysphoria” may need “support and guidance” and that any educator “approached with a request for accommodation must respond with sensitivity, respect, mercy, and compassion.”

While the document allows for Catholic school boards to accommodate transgendered students, it does it in such as way that no special rights are afforded to any particular group.

The proposal endorsed by the archdiocese is vastly different from the board’s own draft policy which gives special rights to transgendered students.

The draft policy, which failed to make it to a vote last month at a tense and emotional meeting, would force young female students to share not only the washroom but also changing rooms with an older boy who identifies himself as a girl. Girls would also be forced to share a room with a boy who identifies himself as a girl “on occasions involving overnight stays and field trips.”

• “Respect that self-identification is the sole criteria for gender identity.”

• “Allow students to use the physical facilities including washrooms, change rooms and locker rooms with which they identify and allow all students the option of choosing gender-neutral facilities. The district will ensure that this same policy will apply on occasions involving overnight stays and field trips.”

• “Allow students to participate in sports teams and access locker or change room facilities based upon the gender with which they identify.”

•“Ensure that gender minority students, staff and families are represented in an inclusive, positive and respectful manner by all school personnel and in all curricular materials.”

The draft policy was developed after a parent successfully campaigned with transgendered activists last year to have her seven-year-old boy attend school dressed as a girl and be allowed to use the girl’s bathroom. The parent, whose anonymity the news media have protected, has refused to withdraw a human rights complaint against the school board, even though the school decided to comply with the parent’s request.

LifeSiteNews contacted Archbishop Smith, asking if the archdiocese has a protocol in place if the board decides to pass policy contrary to Catholic teaching.

Director of Communications Lorraine Turchansky replied: “I trust you understand that the trustees are in the midst of the policy-making process, and so it would not be appropriate for Archbishop Smith to comment publicly at this time.”

“It’s important to understand that the CCSSA working document was developed in collaboration with the Alberta bishops and meant as a resource for boards to use as guidance in the formulation of policies for their districts. The bishops themselves do not write policies for school boards; that is the role of the trustees.”

Turchansky said the archbishop might be able to comment once the trustees have passed a policy, “but he generally does not address hypothetical questions such as the one you have posed.”

The board is planning to bring its draft policy to a vote on October 15.