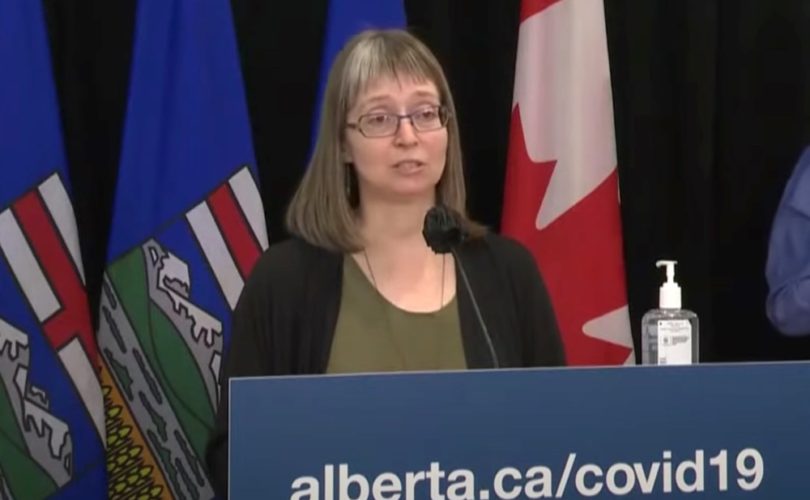 CALGARY, Alberta, May 19, 2021 (LifeSiteNews) – A lawyer for one of Canada’s leading constitutional rights groups is warning that a new bill in the province of Alberta will give the government dangerous new powers by entrenching the “authoritarianism of the Chief Medical Officer of Health.”

“In short, Bill 66 further entrenches the already authoritarian and arbitrary rule of one unelected official at the expense of due process, fundamental justice and the civil liberties of Albertans,” wrote lawyer and President of the Justice Centre for Constitutional Freedoms (JCCF) John Carpay, in a recent opinion piece.

“Unfortunately, Bill 66 worsens the status quo, by entrenching the authoritarianism of the Chief Medical Officer of Health to continue making laws for Albertans without input from the elected Members of the Legislative Assembly. Bill 66 places no checks on Dr. Deena Hinshaw, and instead expands her already undemocratic and authoritarian powers.”

Carpay’s opinion price was written in regard to Bill 66, the Public Health Amendment Act, 2021, which was introduced by Alberta’s Health Minister Tyler Shandro in April of this year, to repeal Bill 10, a law passed in haste in April of 2020 by the Alberta government under Premier Jason Kenney in response to COVID-19.

Shortly after Bill 10 was introduced, a public outcry ensued, with opponents of the bill protesting that it gave too much power to ministers and that it was a severe government overreach.

Further dooming Bill 10 was the fact that it was passed in only 48 hours, despite strong opposition from the Alberta NDP, who wanted the bill to include a sunset clause along with transparency rules included.

The JCCF took the Alberta government to court over Bill 10, arguing that it gave “sweeping, undemocratic powers” to Kenney and his ministers and that it is a “blatant violation of Canada’s constitution.”

According to Carpay, Kenney simply “lied” in trying to justify the sweeping powers afforded under Bill 10.

“Alberta Premier Jason Kenney simply lied about it. He told Albertans that he was merely ‘clarifying existing powers in the Public Health Act,’ when in fact Bill 10 gave new, sweeping, undemocratic powers to him and his ministers. Now, 12 months and one court action later, cabinet ministers stand to lose a power they should never have received in the first place,” wrote Carpay.

As a result of the negative backlash to Bill 10, the Kenney government promised it would look into the concerning parts of the bill and repeal them, which is what Bill 66 was reportedly introduced to accomplish.

Carpay said that there was good news in Bill 66, namely that the “worst section” of Bill 10 will be repealed (minister overreach), along with a decades old mandatory vaccinations section of the Public Health Act.

However according to Carpay, Bill 66, despite two good sections, is in fact worse overall than Bill 10 and is full of “worrisome” steps backwards.

Under Bill 66, Carpay says that the first step “backwards” is the fact that Alberta’s Chief Medical Officer of Health, Dr. Deena Hinshaw, “is not required to provide regular reports to the Legislature containing the medical and scientific basis for her society-crippling and economy-destroying orders.”

Carpay stated as another “worrisome” step in the wrong direction that Bill 66 would continue to allow Hinshaw to issues health orders, even outside a “declared public health emergency, including orders which have no expiration.”

Along with affording Hinshaw more power, Carpay explains that Bill 66 legally validates all health orders issued by Hinshaw for the past 13 months.

“This kind of retroactive law-making suggests the government itself is uncertain whether all the restrictions imposed on Albertans since March of 2020 were and are legally and constitutionally valid,” wrote Carpay.

Additional troublesome aspects of Bill 66, according to Carpay, include allowing health bureaucrats to order places to be “closed down, based only on a ‘test’ or ‘report’ (neither term is defined), and without the need for an inspection,” despite the fact that current law already allows for inspections.

Bill 66 also keeps in place the current “draconian penalties introduced by Bill 10 last year” for those who transgress the Public Health Act, with fines being up to $100,000 for a first offence and $500,000 for subsequent offenses.

Carpay and the JCCF have been active in many legal cases in both Alberta as well as Canada-wide which are a direct result of helping clients fight various draconian COVID-19 health rules.

The JCCF notably serves as legal counsel for Alberta Pastor James Coates of Grace Life Church, who was jailed for 35 days for defying COVID health rules. Coates trial will resume on June 7.

The JCCF is also representing Pastor Tim Stephens of Fairview Baptist Church in Calgary, Alberta, who was arrested in front of his family this past Sunday for holding indoor church services which go against COVID-19 health rules. A judge yesterday agreed to release Stephens so long as he abides by a now-amended May 6 injunction order issued by the Alberta Health Services (AHS).