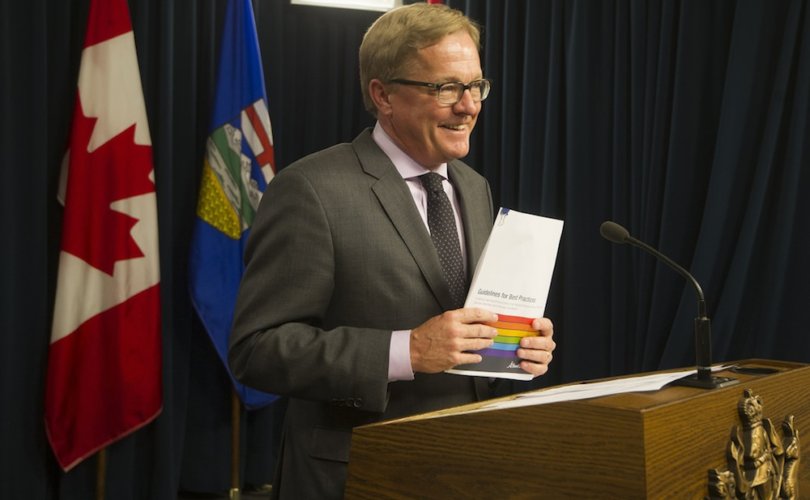 Join LifeSiteNews in supporting Alberta's bishops in their fight against the gender mandate. Sign the petition!

EDMONTON, Alberta, August 19, 2016 (LifeSiteNews) — David Eggen, Alberta’s education minister, has reneged on his previous commitments to parents and school boards in an “open letter” to students promising them “gender” rights that his critics say do not exist.

“You have the right to use the washroom that is consistent with your gender identity. I want you to know that I will support each and every one of you. Together, we will make sure that the rights you have, and the policies your school boards have worked on, are being lived out in your schools.”

Eggen even provides an email address and invites students with issues to contact his staff directly.

Advocates for homosexuality and transgenderism applauded the minister, but conservative Christians and parental rights activists were strongly critical.

“The minister is being dishonest,” Donna Trimble, the head of Parents for Choice in Education, told LifeSiteNews. She said Eggen met with her group in May and agreed that the anti-bullying guidelines for best practices were optional, and while Bill 10 enforces “gay-straight” or “queer-straight” alliances at the request of one child, there are schools that will not comply because it contradicts their stated belief systems.

Trimble’s group explained to Eggen that Catholic and other schools with religious foundations — all of which are state-funded under Alberta’s permissive system — would not comply with all the guidelines. “They will be providing gender-neutral washrooms for transgender students,” she said, and some will find other names for the anti-bullying clubs.

The school board policies were submitted before her group’s meeting with Eggen, though in May his staff had not vetted them. Trimble insists that Eggen knows there are dissenting schools that will treat the guidelines as optional.

Adriana LaGrange, president of the Alberta Catholic School Trustees Association, would not confirm how many of the province’s 23 Catholic boards would be compliant. “We need to find out what the minister was trying to say,” she told LifeSiteNews. But she did insist “that school boards make these policies, not the government,” adding that “Catholic schools respect all our students.”

Trimble said her group was not opposed to gender fluidity or gay-straight alliances per se. “We are for parents’ rights. If the parents agree, we are fine with it.”

But Trimble says the letter appears to be an attempt by Eggen “to strong-arm those boards that aren’t complying with the guidelines into falling into line, using vulnerable children as the lever.” She notes that his letter “doesn’t mention parents at all. He’s trying to get around parents and get around school boards. But we believe the greatest ally of the child when he or she is in emotional turmoil is the parent. This letter appears to be alienating parents from their children.”

Catholic Bishop Fred Henry of Calgary repeated his earlier charge that the New Democratic government is acting oppressively in pushing the LGBT agenda through the schools. “This is clearly another totalitarian move on the government’s part,” he told LifeSiteNews in an email.

He called the open letter “a consistent violation of parental rights” by granting students “direct access to the Alberta government” that “unfortunately, their parents who are the primary educators of their children, don’t [have].”  Bishop Henry urged Albertans to protest. “Parents, don’t sit on your hands – get involved!”

Trimble speculated whether the real audience for the letter was not students at all. “I wonder if this is really aimed at the school boards that are not complying,” she said.

Eggen’s office did not respond to a request for an interview from LifeSiteNews.