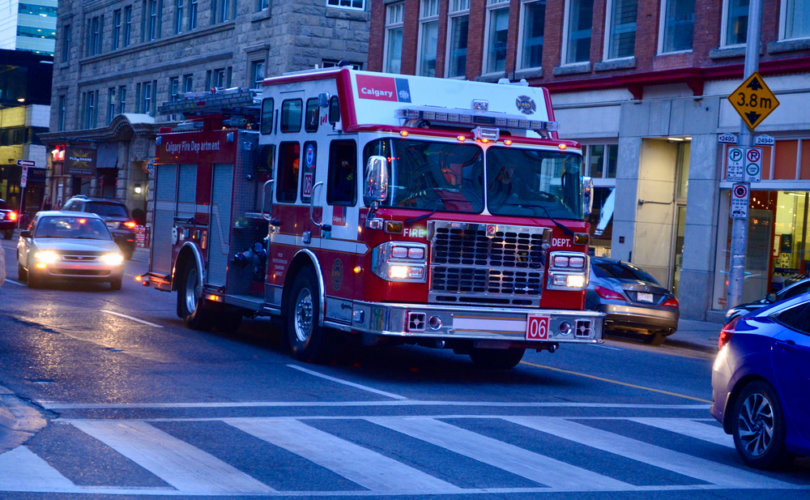 (LifeSiteNews) – A group of Alberta firefighters opposed to COVID jab mandates launched a constitutional challenge against Alberta Health Services’ requirement that all contractors who work for them must be jabbed or lose their jobs.

Tim Moen, who works as a firefighter and paramedic in Alberta, helped found the group Fight for the Frontline. He says that even though he has had the COVID jabs he’s “in this to fight for my brothers and sisters who are being discarded by the system like yesterday’s trash.”

“These are some of the best people I know. Highly skilled responders who have sacrificed their physical and mental health for their community. Communities are LESS safe without them. I’m also fighting for the future. If they get away with this, there will be no end to humiliating violations of bodily autonomy in the future,” Moen said in a press release dated October 14.

Fight for the Frontline has retained legal counsel with the help of constitutional lawyer Derek From. The group recently sent a letter dated October 13 to Dr. Verna Yiu, president and CEO of Alberta Health Services (AHS), to lay out its demands.

“We demand that AHS: Provide a rapid testing option, Recognize natural immunity, Recognize exemptions under the Alberta Human Rights Act, Recognize that an unpaid leave of absence is a constructive dismissal, Recognize that unvaccinated employees are entitled to severance upon dismissal, and, Compensate individuals who suffer vaccine injuries as a result of this mandate,” the group’s letter states to Yiu.

The group says they represent “Alberta firefighters, paramedics and first responders” as well as administrative staff, dispatchers and others “who are being threatened with unpaid suspension and loss of employment due to this COVID-19 vaccination policy of AHS.”

“It is our opinion that this vaccine mandate is unconstitutional under sections 2 and 7 of the Charter of Rights and Freedoms and that it cannot be justified under section I as a reasonable limit in a free and democratic society,” the group’s letter reads to Yiu.

“We further believe that this policy, due to its lack of available accommodations, violates the Alberta Human Rights Act and that unpaid suspensions and losses of emnployment amount to constructive and wrongful dismissals in law.”

AHS has mandated that all members from municipal fire departments who are contracted with them to provide EMS services must be fully jabbed.

According to Fight for the Frontline, many “firefighters from across the province are refusing to take the vaccine at this time for various reasons.”

“Many Alberta firefighters are facing loss of employment due to the AHS vaccine mandate. These firefighters would like the option to be regularly tested for Covid-19 like their fellow municipal employees,” the group says.

Fight for the Frontline’s press release includes an account from firefighter Brian Follett, who after initially wanting the jab has now decided he does not.

“I was injured in a fire last October (2020) and I’m still recovering and on modified duties. I was looking forward to getting vaccinated but being debilitated with hypoxic rhabdomyolysis gave me pause,” Follett wrote.

“I want to choose the time and place to take the vaccine that makes sense to me and my recovery. I shouldn’t face unemployment because of a rigid policy that has no regard for my current health.”

AHS announced that they will extend until November 30 a mandate that all workers be fully vaccinated.  Once the mandate takes effect, it will impact thousands of doctors, nurses, and other healthcare workers.

Alberta’s two largest cities, Calgary and Edmonton, have also mandated the jabs for all city workers.

This past Sunday, around 2,000 people gathered in silent protest against COVID jab mandates in the Alberta capital of Edmonton. At the rally was Alberta doctor Chris Gordillo, who spoke about his firsthand experiences in witnessing COVID jab reactions.

At the silent protest was Moen, who spoke about his Fight for the Frontline group and called upon those at the rally to help support his cause.

Dr. Daniel Nagase also recently said it “shocked” him at how his COVID patients were being treated in an Alberta hospital.

Some unions have fought back on jab mandates.

In September, the union representing Canada’s national police force, the Royal Canadian Mounted Police (RCMP), said it would stand by officers who decide to not get the COVID-19 jabs

Just recently, a group called Mounties for Freedom made up of active and retired members of the Royal Canadian Mounted Police joined together to take a stand, saying in “good conscience” they cannot “willingly participate in enforcing” COVID jabs mandates.”

Canada’s federal government recently said they will ban democratically elected Members of Parliament and staff who have not had COVID jabs from accessing the nation’s center of democracy, the House of Commons.

Vaccine passports have been enacted in all Canadian provinces even though people who have taken the experimental COVID-19 jabs can still contract and spread the disease.

Dr. Peter McCullough, M.D., an eminent internist and cardiologist, recently affirmed that against COVID-19, “[for] people under 50 who fundamentally have no health risks, there’s no scientific rationale for them to ever become vaccinated.”