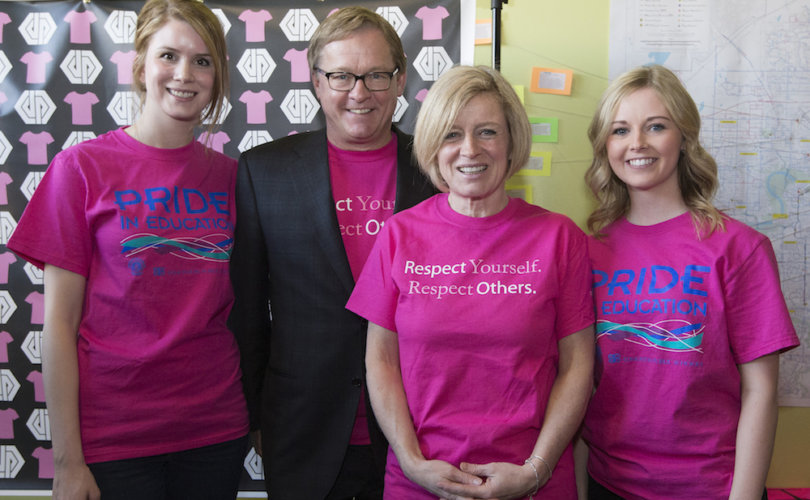 Bill 24, or An Act to Support Gay Straight Alliances, forbids schools telling parents that their child has joined a GSA without the child’s explicit consent, regardless of the student’s age.

The bill would “make it illegal to engage parents about certain school activities for children beginning in kindergarten, regardless of their individual circumstances,” Kenney noted at a press conference Tuesday before Alberta’s legislature began second reading debate on the bill.

“Not even Ontario’s Liberal government, which has taken a very aggressive approach to these issues, has proposed anything like the powers in Bill 24.”

Kenney “had a chance to show Albertans that he had changed and would not be trying to drag the province backwards, but he’s not taking that opportunity,” she told the Edmonton Journal.

“What it also means is he’s not prepared to stand up on behalf of the most vulnerable kids in our school system.”

NDP Education Minister Dave Eggen has already branded Kenney as an extremist, and implied the UCP leader provided the impetus for Bill 24.

“Jason Kenney suggested earlier this year that schools should be able to out LGBTQ students to their parents, and that is dangerous,” Eggen told reporters before tabling the legislation last Thursday.

Kenney fired back when announcing the UCP’s would oppose the bill.

“Neither I nor anyone in our caucus has proposed  ‘outing’ gay kids,” he said.

“To suggest otherwise is offensive and dishonest. It is the opposite of what I have actually said.”

He also described the NDP’s rationale as “transparently cynical” and “part of their desperate effort to talk about anything but their failed economic record.”

His party does “not support mandatory notification of parents regarding the involvement of students in GSAs,” Kenney stressed.

He also reiterated that the UCP supports Bill 10, brought in by the Progressive Conservatives in 2015.

That law compels all publicly funded schools to allow a GSA if a student requests one.

The UCP supports GSAs, Kenney said, and believes these and “other anti-bullying peer groups can be a useful way of supporting students going through difficult times.”

But at the same time, the Alberta Teachers Association Guide says “GSAs are not merely peer support groups but also include ‘curriculum,’ ‘schoolwide educational activities,’ ‘political activities,’ etc,” he said.

With Bill 24, “the NDP is trying to do indirectly what it cannot do directly: that is teaching sensitive subjects that would normally require parental notification,” he asserted.

“Parents would be barred from knowing anything about the guest speakers, programs, or content being taught, a clear violation of the spirit of the School Act.”

In deciding to oppose Bill 24, the UCP caucus focused on “what is in the best interests of children, especially kids at risk,” Kenney said.

“We believe that every child is unique, and that every circumstance faced by kids at risk is different,” he said. “Teachers, not politicians, should decide when it makes sense to engage parents.”

The UCP caucus members also “support the longstanding principles – enshrined in law —  that parents are the primary educators of children and that schools operate under legal authority delegated by parents,” he said.

“We believe that the vast majority of parents have unconditional love for their kids,” Kenney said. Research recognized by GSA advocates shows “parental support and involvement is one of the most important factors in supporting youth at risk, including sexual minority youth,” he said.

Alberta MLAs are expected to continue debate on Bill 24 today.

The UCP, which was formed in July when the Wildrose and Progressive Conservative parties merged, is Alberta’s official opposition party, with 25 MLAs to the NDP’s 54.

Kenney does not currently have a seat in the legislature.