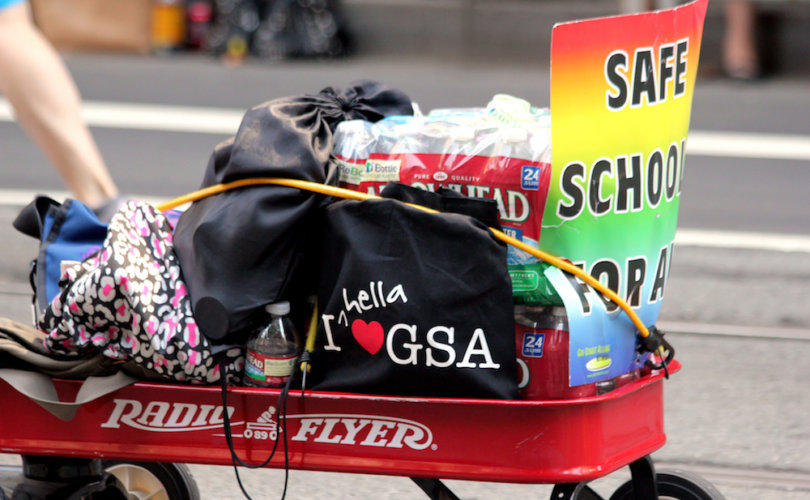 “It’s a breach of the public trust for government to knowingly pass legislation which is unconstitutional,” says Jay Cameron, lawyer for the Calgary-based Justice Center for Constitutional Freedoms (JCCF).

“And this law is clearly unconstitutional.”

Introduced by Education Minister Dave Eggen, Bill 24, or “An Act to support Gay-Straight Alliances,” passed second reading last week, and committee of the whole yesterday, after days of highly charged debate. It is scheduled for third reading today, and possibly a final vote.

The bill forbids schools telling parents their child has joined a “gay-straight alliance” without the child’s permission, regardless of the child’s age.

The Justice Center, which excoriates Bill 24 in an 11-page legal analysis, will represent a number of parents, independent schools, and other stakeholders in a Charter challenge to the legislation, it announced in a Tuesday press release.

It will reveal the identity of the plaintiffs when it files documents in early 2018.

GSAs are “political clubs which promote progressive, secular and libertine beliefs and attitudes about human sexuality,” an “ideology” that is “contrary to the teachings of Islam, Christianity, Orthodox Judaism and other religions,” JCCF said in its legal brief.

Bill 24 compels independent religious schools “to adopt policy positions in support of the government’s preferred LGBTQ ideology,” and is evidence of the NDP’s “intention to control and change the religious character of independent schools,” its press release said.

The legislation violates “parents’ and private schools’ fundamental freedoms of conscience and religion, thought, belief, opinion and expression, and association, guaranteed under section 2 of the Charter.”

And while Bill 24 contains a clause allowing exemptions for private schools, the JCCF analysis dismissed this as “misleading.”

The Justice Center’s position is that “laws should be just, and you shouldn’t need an exemption for an unjust law that might or might not occur,” Cameron told LifeSiteNews.

“It is not acceptable, it is not constitutional, for a government in this province to say we are going to legislate away your constitutional rights, but we might include an exemption to give them back to you,” he said.

“That is garbage. That is complete garbage.”

That section requires schools to “affirm the rights” of staff and students as established in the Alberta Human Rights Act and the Charter of Rights and Freedoms.

It also requires schools to establish a “code of conduct” stating all staff and students “will not be discriminated against as provided for in the Alberta Human Rights Act” and the Charter of Rights.

But the section is “not even in the realm of proper legal thinking. It completely contradicts the law,” Cameron told LifeSiteNews.  “It’s so far out in left field it’s not even in the ballpark.”

The Charter “only binds the government and its delegates,” he explained.

But that’s not the case for independent religious schools, even those that are publicly funded, as are Alberta’s Catholic schools.

“Independent religious schools are protected by the Charter,” Cameron said.

“And what Minister Eggen is trying to do is make them bound by the Charter, which is ridiculous.”

“Not even Ontario’s Liberal government, which has taken a very aggressive approach to these issues, has proposed anything like the powers in Bill 24,” Kenney said last week.

The legislation “concentrates enormous new powers in the hands of the Minister, undermining local decision making by principals, school boards, and independent schools,” he said.

The Alberta Catholic School Trustees’ Association echoed this in a Monday statement criticizing the bill’s potential to undermine the autonomy of local school boards and school officials, the Edmonton Journal reported.

The legislation will require principals of religious schools to “immediately grant permission” for a GSA, without consulting the board or considering parental rights or the school’s religious character.