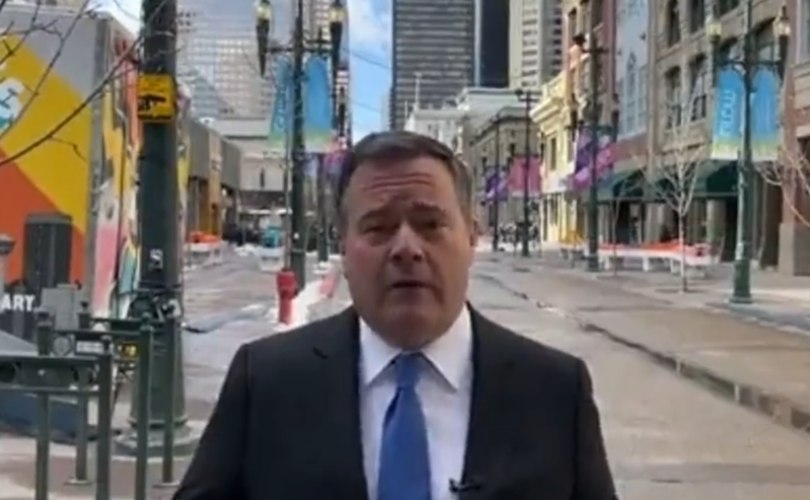 EDMONTON, Alberta  (LifeSiteNews) – Alberta Premier Jason Kenney promised his government will seek a judicial review of Prime Minister Justin Trudeau’s “abuse of power” through the Emergencies Act (EA) despite it being revoked yesterday.

“There never was an emergency that required these extra judicial powers. What a humiliation for those who were defending the indefensible five minutes ago. Alberta intends to proceed with an application for judicial review of the EA invocation to address this abuse of power,” Kenney tweeted yesterday.

“Those whose rights have been violated, and provinces whose jurisdiction has been violated without justification must have their day in Court. The judiciary must be asked to establish limits on such arbitrary use of extraordinary police powers for the future.”

On Wednesday, Trudeau announced that he was ending the EA, saying “the situation is no longer an emergency.”

Yesterday, in the Alberta Legislature, a motion was introduced to “condemn” the “unnecessary invocation of the Emergencies Act by the Government of Canada,” which is “an unnecessary intrusion into provincial jurisdiction under the Constitution of Canada.”

This past Sunday, Kenney said that Alberta would launch a court challenge against the federal government over Trudeau’s “unjustified” use of the EA.

At least one other premier, Scott Moe of Saskatchewan, has said his government is considering suing the Trudeau feds over enacting the EA. However, it is unclear if this will still proceed.

The Canadian Civil Liberties Association also announced last week that it will be suing the Canadian federal government over its invocation of the EA due to violations of civil liberties.

Yesterday, the group said that despite the EA being lifted, they “will continue our case.”

“We will be consulting with our counsel over the next few days to determine what the next steps are in our litigation,” the group said.

Trudeau took the unprecedented step of enacting the EA on February 14. He claimed it was needed to deal with the truckers from the Freedom Convoy, which had been in Ottawa for the past three weeks protesting COVID mandates.

While Kenney said that local “illegal” blockages, such as the one at the Coutts border in Alberta were managed without the need for emergency powers, a letter shows that the Alberta Minister of Transportation Ric McIver asked the feds for aid.

The letter, dated February 5, as reported by Global News, shows that McIver asked if the feds could send aid to help remove the trucks blockading the highway.

Canada’s Senate had spent the week debating the EA. However, it announced yesterday that it was withdrawing its debate surrounding the EA due to it being dropped.

By law, within 60 days of triggering the EA, it is required that an inquiry be initiated to investigate why the Act was needed to be invoked. It is then required that Canada’s Parliament be presented with a report within 360 days regarding the findings.

Under Kenney’s “conservative” government, three Christian pastors, including Artur Pawlowski, were jailed for going against COVID rules. Pawlowski is still behind bars after a judge denied him bail.