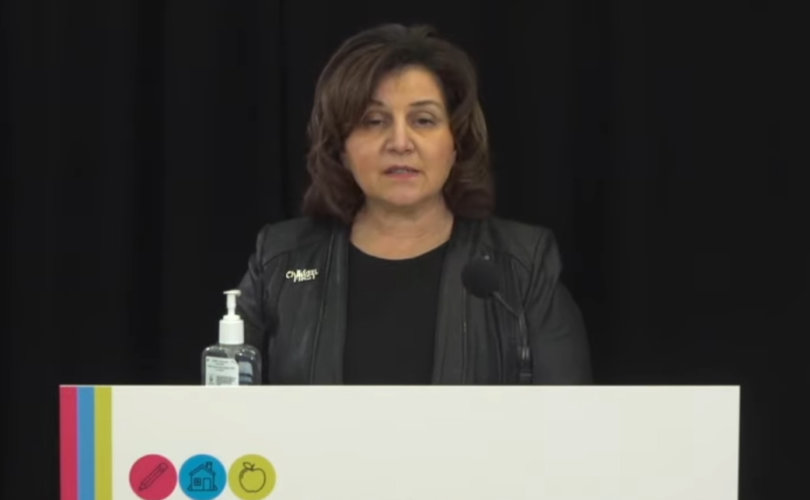 EDMONTON, Alberta (LifeSiteNews) — The government of Alberta has said school boards in the province cannot mandate COVID jabs for students and it they try to do so, they will be held “accountable.”

The province’s Education Minister Adriana LaGrange of the ruling United Conservative Party (UCP) stressed that parent choices regarding vaccines must be “respected” while announcing the new directive.

“As Minister of Education, I take very seriously the responsibility of providing access to education for all students in our province. School authorities cannot deny their students access to education due to their immunization status,” wrote LaGrange in an open letter posted to Twitter Wednesday.

“Individual family choices need to be respected and students should not be stigmatized for their vaccination status. Once vaccinations for children aged 5-11 are available further information will be provided by Alberta Health as to how parents can access them, should they choose to do so.”

The timing of LaGrange’s letter coincides with news that Health Canada is expected to announce tomorrow that it will allow the experimental Pfizer COVID vaccine to be used in kids aged 5 to 11.

Alberta Premier Jason Kenney retweeted LaGrange’s letter showing his support for it — even though he has enacted numerous restrictive COVID measures.

He said that “any” school board that attempts to enact a vaccine mandate for “children to be vaccinated to attend class” will be “held accountable.”

LaGrange said in her letter that she is “aware that COVID-19 vaccines might soon be approved for children aged 5-11” and that while she encourages the jabs, “every child in Alberta is entitled to have access to an education program,” in accordance with the Alberta Education Act.

“To be clear, there is no legislation in Alberta that requires K-12 students to have specific vaccinations to attend in person schools, nor is Alberta Education considering mandating vaccines of any kind for students in the K-12 education system,” wrote LaGrange.

In her letter, LaGrange said she holds the COVID jabs as a “safe and effective means of protecting Albertans from COVID-19” and touted a recent jab program in schools for students in Grades 7 to 12.

Public schools in Alberta have not mandated the COVID jabs for students, as current law passed by order of Bill 66 removed the ability of the government to mandate any type of vaccines.

LaGrange’s position opposing mandatory jabs for school kids is at odds with her policy regarding school board staff.

While school boards in Alberta have not been mandated by Alberta Education to enact mandatory COVID jab policies for staff, LaGrange strongly encouraged them to do so in early October.

Many school boards have since enacted jab policies for staff while allowing for twice-weekly negative testing.

Both Edmonton and Calgary Catholic and public school boards, as well as many smaller rural ones across the province, have mandated the COVID jabs for all staff.

While technically no one in Alberta can be forced to get a vaccine against their will, when it comes to COVID jab mandates in general, many in both the private and public sector have suffered from severe forms of coercion, as in the case of one Catholic school Trustee.

Now former Edmonton Catholic School Board trustee Carla Smiley said she told her board in October that she was not “going to share my private health information in order to attend meetings.”

As a result, Smiley said refusing to be “coerced” into disclosing her COVID jab status led to her being forced to quit.

Kenney, despite his opposition to COVID jabs for school kids, has allowed private companies to openly discriminate against those choosing not to get the jabs by allowing them to enact draconian COVID jab mandates.

Also, under his watch, Alberta Health Services has mandated that all its employees be jabbed by November 30 or face being fired.

The COVID-19 injections approved for emergency use in Canada, including the Pfizer jab for ages 12 and up, all have connections to cells derived from aborted babies. All four have also been associated with severe side effects such as blood clots, rashes, miscarriages, and even heart attacks in young, healthy men and women.

The jab mandates are in force even though COVID vaccine trials have never produced evidence that vaccines stop infection or transmission. Their advocates do not even claim to reduce hospitalization, as their most recent measurement of success is whether or not that jabs prevent severe symptoms of COVID-19. Meanwhile, they do not take into consideration the natural immunity of people who have recovered from the coronavirus.