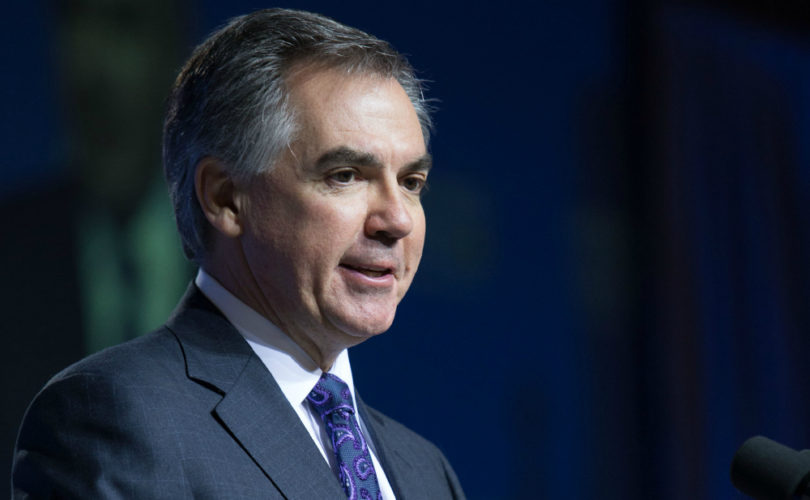 Alberta Premier Jim Prentice has put a controversial bill dealing with gay clubs in schools on hold, because of opposition within his own caucus.

The opposition is coming, reportedly, from small-“l” liberals who think the bill doesn’t go far enough to protect homosexual students from bullying, and not from Christians or social conservatives who believe the bill goes too far, in particular by removing parents’ right to withdraw their children from classes dealing with homosexuality.

“We will pull back. We will pause,” Prentice told reporters yesterday afternoon. While he was away all week a debate raged in the province over his bill.

Alberta Christian parents will be spared for another day being stripped of their fundamental right to educate their children in their beliefs in their own schools.

But until yesterday afternoon, the Alberta legislature appeared in a hurry-up mode imposed by Prentice to approve Bill 10, which Christians are complaining would force their schools to accept so-called “gay-straight alliances.”

So warn Christian rights advocates Jojo Ruba of Faith Beyond Belief, in Calgary, and the Association for Reformed Political Action in Ottawa.

The issue is two-fold: how far the provincial government will go to force gay-straight alliances (GSAs) into the province’s public, Catholic, and Christian schools, and how much will it retain of the parents’ time-honoured right to remove their children when the school is teaching lessons contrary to their own beliefs on subjects such as homosexuality and religion.

GSAs are ostensibly being promoted, in two competing pieces of legislation, to prevent bullying of homosexual students, but Christians see GSAs as a way to normalize homosexuality and undermine Christian sexual morality as taught at home, church, and private Protestant and Catholic schools.

“We see this as driving a wedge between parents and their children,” said Mark Penninga of the Association for Reformed Political Action. “It is a violation of freedom of religion and conscience, and of the parents’ rights and responsibilities as the primary educator of their children.”

Earlier this year the Liberal opposition introduced an amendment to the new Education Act forcing GSAs on schools whether parents or boards wanted them or not, but it was soundly defeated. A general election put the long-governing Progressive Conservatives back in power and the Liberals have reintroduced the idea—common across North American school systems—as private member’s bill 202. It would have required all schools to establish GSAs on request and would also have exposed the chasm within Tory ranks on the issue.

But the new premier, Jim Prentice, outflanked the Liberals with Bill 10, which in its original form left the issue of whether to let GSAs into individual schools up to the boards, while giving students who wanted a club the right to appeal to the courts—at the students’ expense. And where Bill 202 would have opened up Christian homeschoolers to charges of discrimination if they dared to teach Christian sexual morality, Bill 10 leaves them untouched.

However, under pressure from “gay” rights supporters within the party and the public, Bill 10 was toughened up to make GSAs nearly compulsory for public schools, while leaving open to interpretation how compelling they will be for the province’s fully state-funded Catholic system and its partially-funded Christian schools.

One of his Tory critics, a recent rival of Prentice’s for the Tory leadership, Thomas Lukaszuk, faulted Bill 10 as a half measure. “We didn’t give women half the vote,” he argued.

Prentice has been out of the province while these changes were made. When he introduced Bill 10 he was clearly playing to the Progressive Conservative party’s conservative wing, saying, “Bill 202 asks us to cast aside our constituents' beliefs in parental rights (and) in the autonomy of school boards to support GSAs. It's unfair to us and to those whom we represent.”

Bill 10 in its original form allowed a school to refuse to create a GSA when a student requested it, but allowed the student to appeal to the board. If the board refused, the student could appeal to the courts, where its decision would be judged, warned Prentice, by its “reasonableness.”

This left wriggle room for Christian private schools or Catholic boards to hope they could defend themselves against GSAs on the grounds they normalized homosexuality in contradiction to Christian teaching. Thus, it could be argued that it would be reasonable to refuse GSAs.

But on Wednesday that appeal route was closed. As amended, the bill now states that the student may appeal an adverse board decision only to the minister of education. Significantly, he is given no leeway, but must take steps to satisfy the student’s request. However, the minister can decide to provide the GSA, under the revised Bill 10, off school grounds.

Meanwhile Bill 10 removes the parents’ right to be notified when the subject of sexual preference is taught and then their right to remove their child.  The right would be retained for the topics of religion and “human sexuality.” Would this last term’s inclusion still cover parents for homosexuality? Not likely, warns Penninga. With “sexual preference” removed, school authorities will take the narrowest interpretation they can.

“What they are really trying to do,” declares Jojo Ruba, director of Faith Beyond Belief, a Christian apologetics advocacy group, “is to tell Christian schools how they should teach Christianity. Because the Education Act allows Christian parents to band together and found schools where they teach their children their religious beliefs alongside the provincial curriculum. Now the state can step into that school and force the children to be taught the opposite of what the parents are teaching.”

Ruba says Alberta is on the verge of wrecking an admirably diverse education system that supports the Catholic system with the same funding as the public system, and provides 80-percent funding for independent schools with many different faith backgrounds—and none. “There is a vested interest here in Alberta,” warns Ruba, “that wants to dismantle the private and Catholic school systems. It won’t be happy until Alberta schools have no religious content.”

“This is just the first step,” says Ruba, that will lead ultimately to the state’s determining what parents can teach their children at home. Those pushing GSAs should start their own schools, he says, rather than trying to shut down Christian ones.

Moreover, Bill 10 doesn’t just require schools to support GSAs. It applies to “any activity or organization” aimed at reducing discrimination and encouraging diversity. Thus, if the Red Deer chapter of the notorious European feminist group Femen wanted to protest the Catholic Church’s discriminatory policy of allowing only men to be priests, it seems Bill 10 would require the minister of education to open the doors at St. Dominic Catholic High School for one of their typical bare-breasted “activities.”